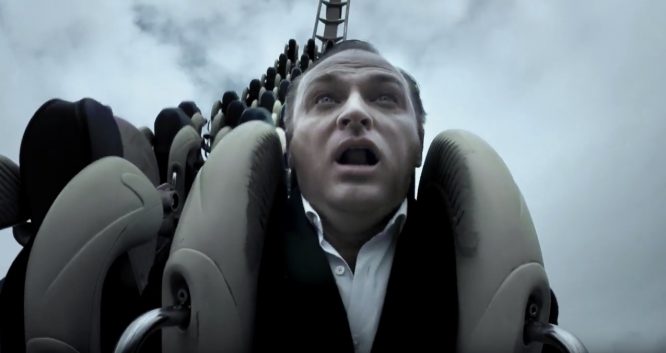 I have nine items for you today, and the theme I’ve chosen for the first four of them is “The Thrill Of Descent“. You’ll see why.

(I must give credit to the wonderful TYWKIWDBI blog for many of the items I’ve collected below; it has been a consistent source of my selections over the last 6+ years.) 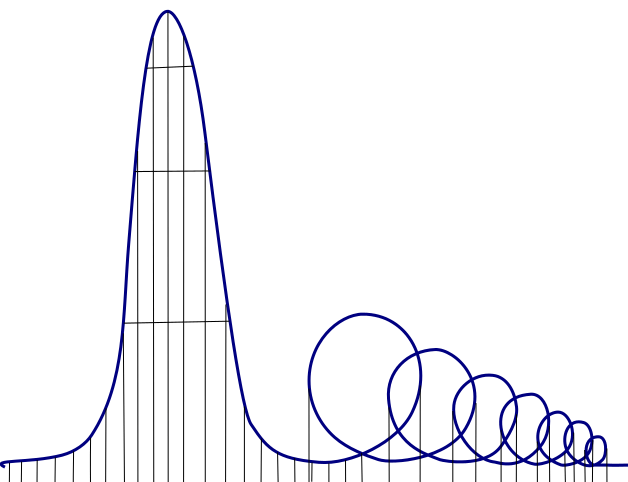 The first item is both thoroughly morbid and macabre, and also kind of awesome. It’s a concept called The Euthanasia Coaster. It was conceived and designed by a Lithuanian man named Julijonas Urbonas when he was a PhD candidate at The Royal College of Art in London in 2010. In 2011, a scale model he built became part of an exhibit on the future of the human species at the Science Gallery in Dublin (that story is here).

In a nutshell, it’s a concept for a steel roller coaster designed to kill its passengers. From The Font of All Human Knowledge:

“Urbonas, who has worked at an amusement park, stated that the goal of his concept roller coaster is to take lives “with elegance and euphoria”. As for practical applications of his design, Urbonas mentioned ‘euthanasia’ or ‘execution’. John Allen, who served as president of the Philadelphia Toboggan Company, inspired Urbonas with his description of the ‘ultimate’ roller coaster as one that ‘sends out 24 people and they all come back dead’.

“The concept design of the layout begins with a steep-angled lift to the 510-metre (1,670 ft) (0.317 mile) top, which would take two minutes for the 24-passenger train to reach. From there, a 500-metre (1,600 ft) drop would take the train to 360 kilometres per hour (220 mph), close to its terminal velocity, before flattening out and speeding into the first of its seven slightly clothoid inversions. Each inversion would have a smaller diameter than the one before in order to maintain the lethal 10 g to passengers while the train loses speed. After a sharp right-hand turn the train would enter a straight, where unloading of corpses and loading of new passengers could take place.

“The Euthanasia Coaster would kill its passengers through prolonged cerebral hypoxia, or insufficient supply of oxygen to the brain.”

I searched for videos related to this concept, and of course I found some, because nowadays there’s a video of everything. I’ve embedded two of them below. The first is an award-winning 2015 short film called H Positive by director Glenn Paton and produced by Academy Films. It’s very well done. Don’t be daunted by its length — it really ends at the 5:40 mark; after that, the credits roll.

The second video is a start-to-finish computer simulation made by Màrius Tomé i Covelo. It’s better than other simulations I found, in part because of the creator’s nice, dismal touch of adding rain and storm sounds. 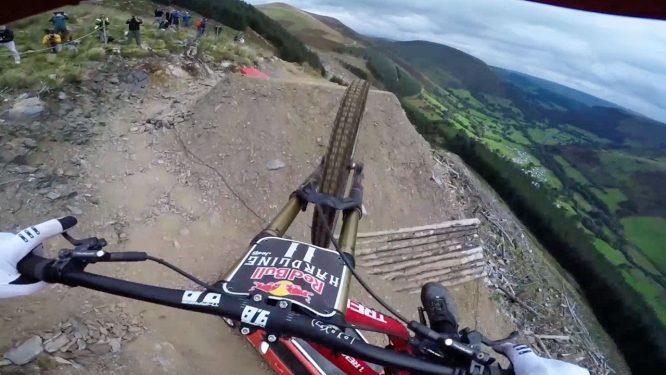 The Euthanasia Coaster is designed for people who want to die “with elegance and euphoria”. But frightening descents also seem to be a source of non-fatal euphoria for other people, and the next three items provide thrilling examples of that phenomenon. I think these are metal not because they’re morbid and macabre, but because they’re big bursts of fear-induced adrenaline.

The first video was filmed with a GoPro camera by daredevil Dan Atherton during his ride in September 2016 down the Red Bull Hardline mountain-bike course in the mountains of Wales. Red Bull tastes foul and it’s really not good for you, but I hope you keep swilling it so the company will continue sponsoring gonzo competitions like this one. Here’s the description that accompanies the video at YouTube:

“See firsthand what it’s like to rip down one of the heaviest downhill mountain bike tracks ever created, through he GoPro view of the creator himself, Dan Atherton. It’s why Red Bull Hardline is an event like no other. The long and technical course plays on a variety of disciplines, where incredibly steep and rocky technical sections were combined with a motocross run in and 50-foot [15.24 meters] gap jump to create one of the most progressive downhill courses on the planet.”

By the way, Atherton (who designed the course) came in 13th in the competition, separated by 17 seconds from the first-place finisher.

If that last video was too tame for you, the next one ought to fix you up. I think I peed myself a little when I saw it. It’s another POV video filmed with a GoPro device and shows the descent of Matterhorn from its peak. The 14,692-foot mountain is located in the Aosta Valley in Italy and Valais in Switzerland, and has one of the highest summits in Europe. I haven’t found the identity of the skier.

(Credit to Phro for linking me to this horror many months ago.)

Okay, one more example of “The Thrill of Descent”. This next video was filmed with a GoPro by Dario Zanon as he followed Graham Dickinson on a wingsuit flight down a mountainside near Chamonix, France. Crazy, and exhilarating.

This same flight was also filmed from two other perspectives, one from Dickinson‘s front helmet-cam and the other from his rear helmet-cam, which shows Zanon following him down. I’ve included both of those videos as well.

Time to change subjects. What’s that you say? You’d like to calm your churning stomach? You’d like see some ping-pong? Okay, I can do that.

Ping-pong doesn’t usually seem like a way of working up a good sweat, but when dudes like this are competing it’s a different story. This is a 41-shot rally in a match between Singapore’s Ning Gao and Nigeria’s Segun Toriola at the 2014 Commonwealth Games in Glasgow, Scotland. Toriola was on the defensive from the very beginning. Having been put in that position by Ning Gao’s relentless attack, there was only one way to win. 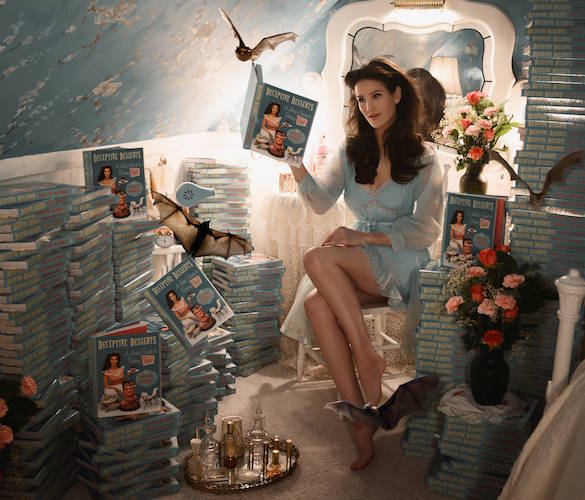 Let’s have one more light-hearted but nonetheless thoroughly metal item before moving on. What you’re looking at above is a photo of the glamorous and twisted Christine McConnell, who is an artist, photographer, and baker. I wrote about her once before in a THAT’S METAL! column (here) back in September 2015 based on her talent for creating horrifying edible concoctions. Since then Christine has landed a book deal, and in March of this year Regan Arts released her first volume, entitled Deceptive Desserts: A Lady’s Guide To Baking Bad! (on Amazon here).

Christine has also posted photos of some of her recent creations. A few of them are below, and more can be found here. This made me really hungry.

(Thanks again to Phro for informing me of this update.) 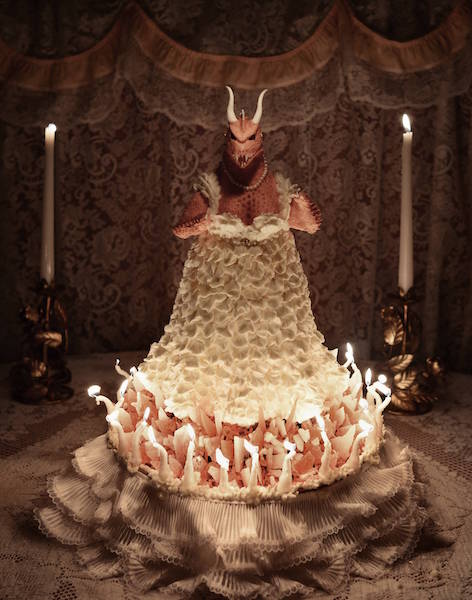 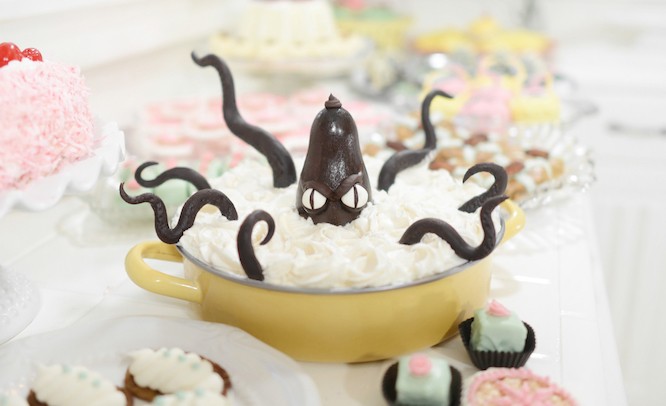 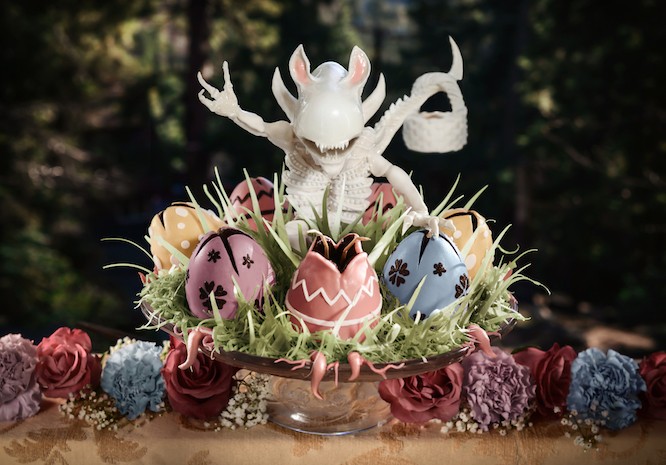 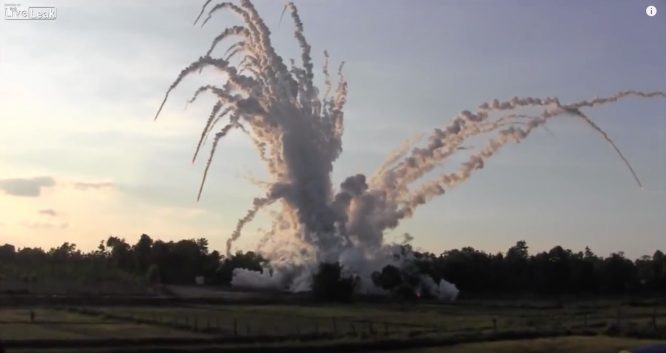 Here’s something else I’ve featured before in a THAT’S METAL! post, but I’ve now got some new footage from earlier this year.

Every year there are explosive-filled festivals in Thailand put on by the ethnic Lao people. They’re called Rocket Festivals in English. The fireworks technology displayed in these events is unlike anything you’ve seen at a Fourth of July celebration in the U.S. The stars of the show are huge, rocket-powered hoops. When everything goes right, they reach astonishing heights, trailing impressive spiraling towers of smoke. When they fail, people run for their lives. That’s fuckin’ metal.

The first video below shows one of the great successes. The second one is a highlight reel from the 2015 event. Be sure to stick with it until the second highlight. 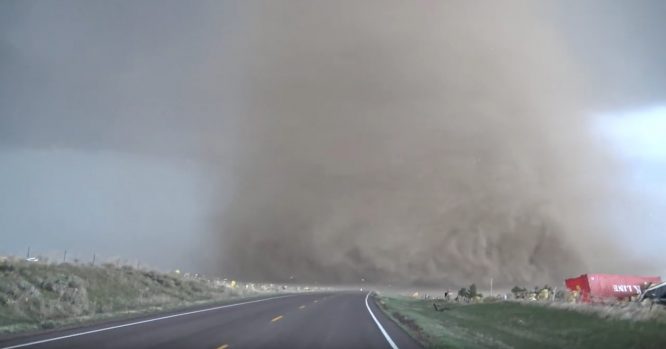 In the past I’ve often included in this series photos and videos showing the stunning destructive power and eye-popping visual magnificence of nature’s fury. I presume you already understand why that’s metal. This next video shows a massive tornado that touched down just north of Wray, Colorado, on May 7, 2016. The people who filmed it while racing in the wrong direction are in obvious need of psychiatric care. However, they did provide us with a remarkably close-up look at something I find terrifying but glorious.

(I’m pretty sure Phro linked me to one of these videos last spring, too.) 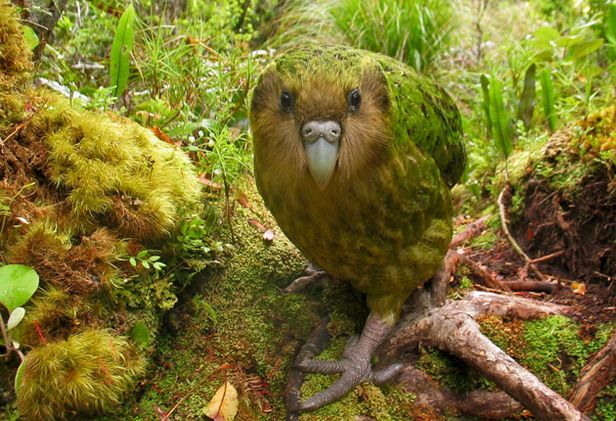 To wrap up this new edition of THAT’S METAL!, I’ve selected a video that could be titled, “Fucked In the Head”, which of course describes a high percentage of metal bands and their fans. Also, I did explain at the outset of this post that I find some things metal precisely because they’re so goddamned ludicrous.

In this video, the hilarious Stephen Fry accompanies zoologist Mark Carwardine during an expedition in New Zealand in which they encounter a rare flightless parrot called the kakapo (also called the owl parrot). There must be easier ways of collecting rare parrot DNA.

By the way, the kakapo is critically endangered; as of June 2016, the total known adult population was 123. That’s not funny, nor is it metal. For more info about the New Zealand government’s efforts to protect the species and help it recover, go here.