(DGR prepared this detailed review of the new album by Andorra’s Persefone, and we have a full music stream for you at the end.)

If there is one thing that I’ve come to admire in music over the past few years, it is a sense of ambition. As music has become democratized and we’ve found bedroom and studio projects achieving just as much as groups with label backing, I’ve found bands who seem to have decided that since there is no more ‘living within their means’ any more, they can just go for it every time they step up to the plate. Persefone are one of those bands.

Now a handful of albums deep into their career, each disc has seemingly grown in size and scope compared to the last one. They come off as a group that has overdosed on just as many Dream Theater and Symphony X keyboard-laden discs as they have the late ’90s and early 2000s melodeath scene. 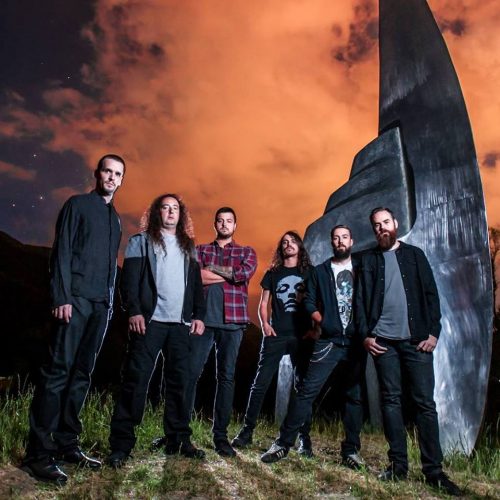 Describing Persefone is actually a difficult challenge, as every album has been different, pulling heavy influence lyrically from spiritualism and philosophy, and also giving in to the urge to explore Asian influences, as Shin-Ken had Japanese elements intertwined throughout the group’s thick slate of music.

Persefone’s most recent album, Aathma, however, actually plays it somewhat safe by Persefone standards: It feels like a logical continuation of what the band were writing with Spiritual Migration, given slightly different form and also absorbing some of the more recent trends in metal (as well, it seems, absorbing a chunk of fellow Andorran band Nami’s lineup by the time of recording).

This is what I find admirable about the band, though. Although Aathma feels ‘safe’ by Persefone standards, it is still a disc that comes across leagues bigger than most metal albums that come out these days. It is a disc that revells in excess and leads to many a ridiculously over-the-top situation. Persefone have become my go-to band to scream at me about spiritualistic philosophy, to yell at me about how my spirit is equal with the universe and the infinities of love.

Persefone are the sort of band who write ‘album’ albums, and they have been since moment one. Not content to just provide a collection of single tracks with no connective tissue (which does work as well, not knocking that approach), Persefone have made multiple concept discs, and Aathma continues that trend.

Aathma isn’t the most shuffle-friendly disc because of that, as multiple songs spill over into each other. On top of that, the band even do the rare double instrumental intro before the real music starts on song three. That’s a little bit of a bummer, as the opening two songs are about a minute and a half to two minutes each, and could’ve been combined into one — save for the song titles themselves being two different things that somewhat help spell out the concept of said Aathma disc. If you’ve ever wondered what it would be like to have the spiritual knick-knacks and bookstore owner at the mall make a keyboard-heavy melo-death album, then Persefone certainly have you covered.

Musically, Persefone also continue their trend of recording music like music is going out of style. As on Spiritual Migration, the fully fleshed-out songs that comprise a majority of this album are huge — to put it politely. I would argue that more probably happens within the opening minute and a half of the song “Living Waves” than happens in whole other albums, without even considering the rest of the song.

“Living Waves” positions itself at the center of Aathma, and at the album’s core, it feels like the song that centralizes the themes, both musically and lyrically, of the whole disc. The opening handful of songs slowly build up to “Living Waves”, and afterward comes another collection of solid songs, and then the showpiece “Aathma” song — itself consisting of four distinct secitons and clocking in at a hefty near-twenty minutes of music.

“Living Waves” also features the greatest amount of contribution from Cynic’s Paul Masvidal, who provides significant vocal work in the opening of the song after his brief opening narration bit on track one. “Living Waves” is one of the more organic songs on the disc, starting out huge and bombastic and then calming itself down before quickly rebuilding itself into a massive power chorus to close things out. It even has a thick, mid-paced double-bass roll that you can’t help but nod along with, the light keyboard effect on top of it helping to keep tempo.

The songs in the front half of Aathma get the unenviable act of welcoming people back into the fold, so “Prison Skin” in part feels like the most direct continuation of what Persefone had done on previous albums, with heaps of instrumental work packed in with as much vocal work as the band could muster. However, like its other brethren up front, it does suffer a little bit from having no immediate hooks to it, though it is an impressive song from front-to-back.

The guys in Persefone can shred, and I think before the halfway mark of the disc have covered just about every scale imaginable on guitar. As someone who appreciates a good wall of drumwork, Persefone don’t fall short on that account either, and the kit is summarily destroyed, rebuilt, and then destroyed again for fun, in the first half of Aathma.

This is one of those albums, as referenced above, where it feels like there are three solid movements: instrumentals to open for a calm bit, a MASSIVE AND DENSE PATCH OF SONGS, more calm, and then the next WALL OF SOUND, and finally you hit the “Aathma” showpiece, which basically creates its own miniature cosmos of everything that has been introduced prior to it.

Surprisingly, even with the massive prog epic of “Aathma” serving as a musicianship showcase to close the album out, and the infectious catchiness of “Living Waves” slowly creeping into the listener’s skull, the song that I was most drawn to is the somewhat hidden “Stillness is Timelessnes”.

Much of credit for that goes to the blastbeat-driven chorus section of the song. Many bands have done it, but the glorious riding into battle on top of a powerful steed, gunfire surrounding you, style of epic singing over a blastbeat and massive guitar wall never fails to have an effect on me. It proves to be a highlight moment of Aathma as a whole, and remains one of the sections that I look forward to over and over through repeat runs of the album. The song slowly just builds and builds to that moment, and it kicks in at the perfect time, triumphant as can be.

I adhere to the idea that a listener’s favorite Persefone disc tends to be the first one they’ve come across, mostly because the band have fashioned a career out of making these accelerator-to-the-floor prog epics, each one consisting of a huge multitude of differing movements, sweeping guitar solos, massive keyboard work, and even heftier rhythm sections. The band have blatantly refused to tread over the same ground twice.

Persefone are the sort of band you go to if you really want to appreciate the ‘musicianship’ on top of some generally excellent song-writing, and in that way each song proves to be its own adventure. The act of discovering different things that stick out to you sadly has gone a little underappreciated, and it is nice to see that Persefone still carry that flag, making songs that have so much going on within them that each fully fleshed-out song feels like something you have to chip away at, finding something different each time. You could probably make an afternoon out of exploring the closing “Aathma” song itself.

Whilst Aathma does hew a little close to Spiritual Migration’s spiritualistic/philosphical nature — albeit a different facet of it — it is still its own album, just one that doesn’t feel like a massive shift in tone like before. However, that Persefone found even more to explore within that same realm and still have kicked out a thick chunk of music like this is impressive in its own right.

Aathma demonstrates why people appreciate this band as much as they do, and why folks are so fervent about getting the band’s name out there among new listeners. Because Aathma is the sort of metal disc you don’t cross paths with everyday, crafted by a band truly willing to be adventurous and to cast genre conventions aside in favor of packing just about ‘everything’ into each song.