The first band here is Rex Venomous, they are a multinational group, and the debut two-song EP you’re about to hear is Tenetur et Relicta. I looked up those two Latin words, and they translate as “bound and abandoned”.

I know a few things about the identity of the band members that haven’t been publicly revealed yet, but I managed to extract permission to spill the beans:

Rex Demonus is a project begun by Swedish composer and guitarist Håkan Stuvemark, the driving force behind the mighty Wombbath and also a member of Skineater and Pale King. He was also a member of In Thy Dreams, which split up after releasing two albums in 1999 and 2001.

The two songs on Tenetur et Relicta — the title track and “Rex Autem Infirma” — are downright explosive, from the breathtaking speed of the drumwork to the dark, searing intensity of the shimmering  riffs and the wild, raw savagery of the roaring and shrieking vocals. Both songs also include magnificent solos that propel the electrifying vibrancy of the music even further into the stratosphere.

The music here is a turbocharged surge of melodic death metal, with “Tenetur et Relicta” being the more atmospherically bleak and brooding piece and with more pronounced elements of black metal in the mix, while “Rex Autem Infirma” is a more jolting, galloping experience. But both songs reach heights of soaring majesty, as emotionally intense as they are physically arresting, and the melodies are captivating.

The demo is a “pay what you want” download on Bandcamp. Pay or not (but pay is better), please download this so Rex Venomous will prove to be more than a one-off piece of creative impulsiveness. 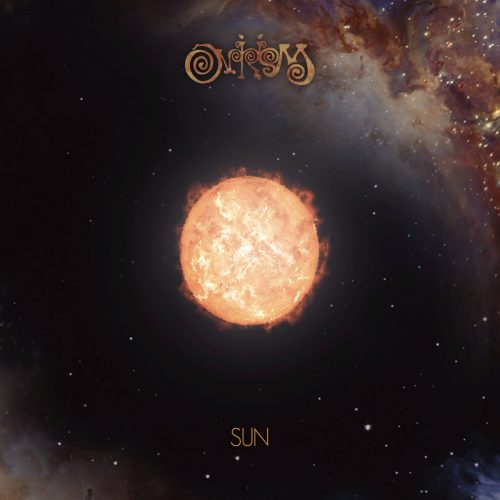 Onirism isn’t the first band to combine utterly enthralling and transcendently beautiful sounds with the kind of savagery that makes you want to hide under your bed, but holy hell, they do it well. Actually, it’s a “he” and not a “they”, a talented Frenchman at the helm of this black metal enterprise.

Onirism has released a previous album and an EP, both of which eluded my attention, but I’m getting smarter and won’t overlook this new second album, the name of which is Sun. It’s described as music “about the endless space and the bringer of light and shadow”, and it will be released by Naturmacht Productions on September 23.

Once again, I owe the e-mail alert feature provided by Bandcamp for discovering this. When I reacted to the Bandcamp alert, I found the stream of an advance track named “Heart of Everything“. The ambient music and keyboard melodies in the song are simply sublime — as gorgeous and mysterious as visions of glowing nebulae in the vast void — while the vocals are absolutely incinerating in their anguished, throat-shredding intensity. And on top of all that, the drum and bass rhythms will get your head moving while your imagination rockets off into the cosmos. 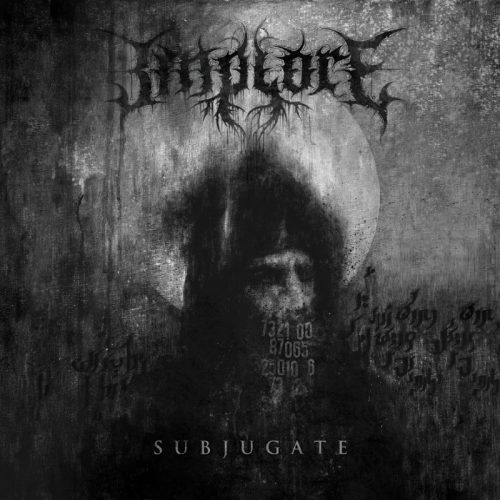 The Berlin-based band Implore (whose members include musicians originally from Spain and Italy) now have the substantial backing of Century Media, but I suspect they’re still not as well known as they should be. That will certainly change, and change quickly.

With one full-length under their belts (2015’s Depopulation) and a plethora of live shows and festival appearances on their resume, they’re now poised to release their second album, Subjugate, through Century Media on September 22, in cooperation with the band’s former label Pelagic Records. Two songs have been released so far, and they reveal the ways in which Implore incorporate differing genre elements into a framework of brutalizing death metal.

“Loathe” is a 50-second grindcore barrage that goes off like a nuclear detonation and moves just as fast and just as mercilessly as a radioactive blast front. The second single, “Untouchable Pyramid” is longer than “Loathe”, and while it’s no less electrifying and no less demolishing, it’s more in the vein of bone-crushing death metal mixed with hardcore and crust. Both songs will open up adrenaline reserves you didn’t know you had. 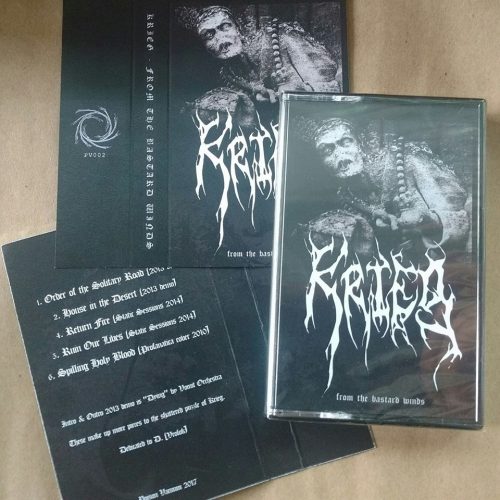 The long-running US black metal band Krieg have two new releases that I discovered back-to-back. The first is a new tape named From the Bastard Winds, which has just been released by Poison Vacuum, an independent label from Boston (artwork above), and the second is an EP named Bleak Passage, which I’ll turn to in a minute.

Poison Vacuum has extracted one track off From the Bastard Winds for streaming, the name of which is “Return Fire“. The song originally appeared on Krieg’s 2014 album Transient, but this version is the one that was recorded live in a video by Static Sessions TV that same year (you can, and should, watch the video here).

You sense the approach of something unearthly and terrifying in the opening half minute of the track, but when the song fully engages it’s a black-hearted, d-beat-driven romp — a head-battering and irresistibly head-moving affair, and one that grows even more bleak and unforgiving as the pace slows in the band end of the track. The vocals are off-the-charts intense, like a blowtorch of pain and fury capable of burning the skin right off your bug-eyed face.

From the Bastard Winds includes one other track from the Static Sessions live video session plus the three other tracks you can see listed in the image above, including a cover of Profanatica’s “Spilling Holy Blood”.

From the Bastard Winds at Poison Vacuum:
http://www.poisonvacuum.storenvy.com 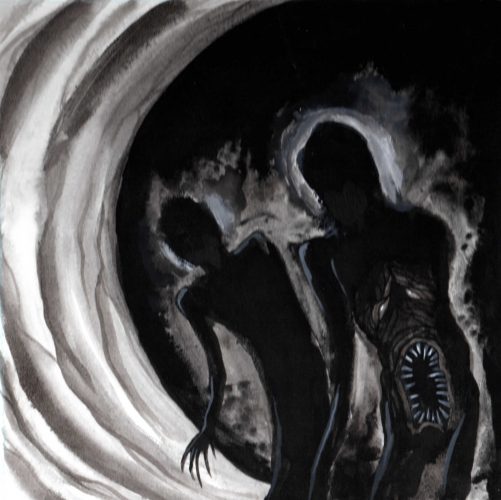 Bleak Passage is the other new Krieg release I mentioned. It consists of four tracks captured in a limited, lathe-cut vinyl edition by Sineater Records featuring artwork by Jef Whitehead (Leviathan’s Wrest). On the Bandcamp edition of Bleak Passage there’s also a fifth track that appeared as a bonus song on the 2017 cassette pressing (via Foreign Sounds) of an earlier Krieg demo named Songs for Resistance.

The songs here are an amalgam of changing genre elements wrapped in a cloak of black metal thorns. They rip with cold, merciless ferocity, they bludgeon with primitive, bestial efficiency, they careen off the walls like red-eyed punks, they rock damned hard, there’s even some freakish, psychoactive soloing — and the fourth track is a skin-chilling instrumental piece that sounds like the grotesque emanations of a croaking reptilian lord combined with the flickerings of a poltergeist.

No two songs are quite alike, manifesting instead a changing array of interests. All the instrumental performers are firing on all cylinders, and Neill Jameson’s wide-ranging vocals are once again so frighteningly intense that they’re capable of sucking the wind right out of your lungs. 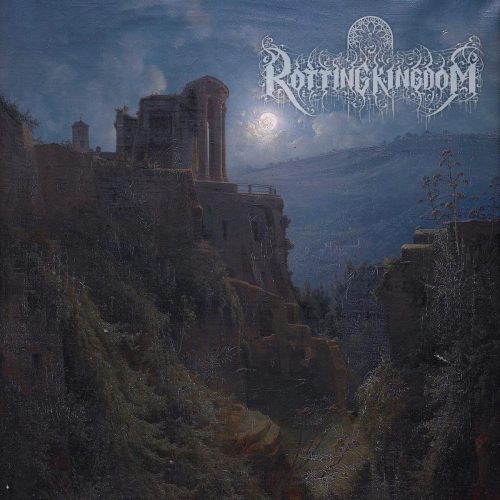 Rotting Kingdom is a new band from Lexington, Kentucky, that features current and former members of Tombstalker, whose music we’ve covered several times in the past. They’ve recorded a self-titled EP that will be released on tape this fall via Morbid Records, and they’ve recently revealed a track from the EP named “Adrift in a Sea of Souls“.

This is a tremendous song, a staggeringly heavy, often stunningly dismal, but thoroughly gripping piece of melodic, doom-drenched death metal. The moaning guitar harmonies at the outset are chillingly bleak, Anton Escobar’s vocals are downright abyssal (and he also howls like a rabid wolf), and when the band accelerate the pace the song turns into a massive headbanger. Near the end of this dynamic, genre-splicing track, the music segues into an instrumental interlude that’s disturbingly demented before the band ramp up again for a blood-rushing, head-hammering finish.

This promises to be a very good EP and one whose release will be worth watching for like a hawk.