Needless to say, I’m way behind. So what I’m doing here is collecting some music I actually had planned to post last Thursday, but ran out of time before leaving Seattle — though I have added two more songs I became aware of since then. 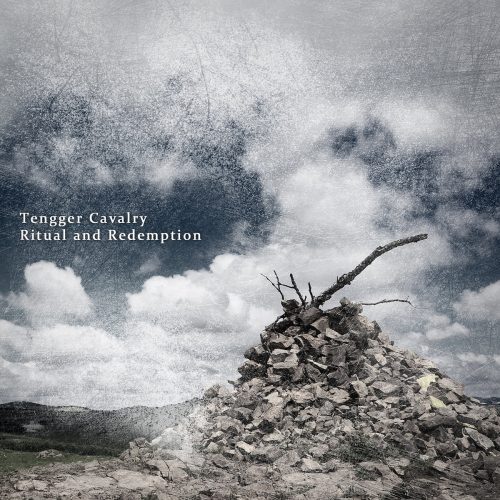 I’ve been a fan of this band going back to their first release, when all the members were still based in China. The band’s main man Nature Ganganbaigal has now been in New York for around four years, having arrived originally to pursue a master’s degree at NYU, and since then has done such things as play a sold-out concert at Carnegie Hall and become the subject of articles in those well-known metal zines The New York Times and The Wall Street Journal.

To his resume he can now add the signing of Tengger Cavalry by Napalm Records, which was announced last Friday. The announcement states that a new album will be released in early 2018, but on the day of the announcement the band also released a lyric video for one of the new album tracks, “Ritual and Redemption“.

The artwork featured in the video is wonderful, and the song is really good as well, though to my ears the Mongolian folk music aspect of the band’s sound is a bit more toned-down compared to much of what they have done before, and in its rhythms this is less of a gallop across the plains than some of their most popular tunes.

The song is a heavy, ominous beast with eerie wisps of melody (presumably from the horse-head fiddle) flickering through the big riffs, and the fiddle plays a prominent (and somber) role in an acoustic interlude that leads into a fiery finish. Throat-singing has been a distinctive feature in much of the band’s music, though here the deep voice is slowly expressing English-language lyrics, less exotically than in some previous releases, but not a dramatic shift (see, for example, last year’s Cavalry In Thousands).

Like Tengger Cavalry, Aetherian is another band we’ve been writing about for years, beginning with their first single in 2013 and including their second one in 2015, their debut EP released the same year (and reviewed by DGR here), their amazing single and video from last year, “The Rain”, and the first single from their debut album, The Untamed Wilderness, which will be released by Lifeforce Records on November 24th.

And now there’s a second single from this eagerly awaited new album. “Shade of the Sun” is further proof of this Greek melodic death metal band’s great ability to write melodies that get stuck in the head within seconds — although the song also seethes and jabs and burns with an anguished intensity. It’s a dark and heavy song, and the tremendous vocals really push the emotional force of the music into wrenching territory, but as always seems to be true with this band’s composition, there is a forlorn and heart-swelling beauty in the music as well. 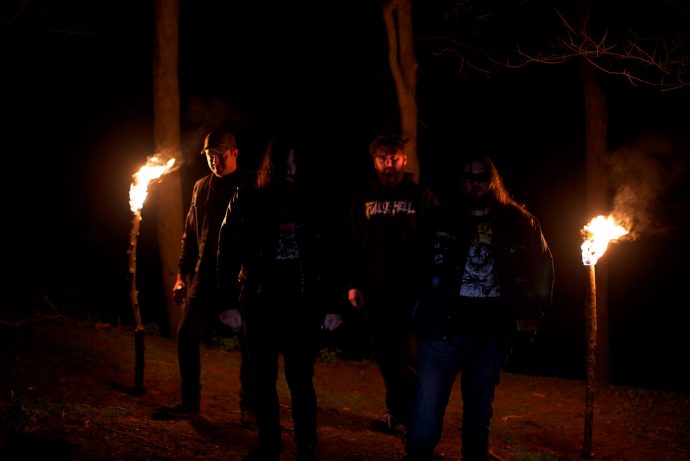 Outer Heaven makes the third band in a row that I’ve been following closely for years, in this case since discovering their 2013 demo, and continuing through their 2015 EP Diabolus Vobiscum and their stupendous four-way split last year with Gatecreeper, Homewrecker, and Scorched.

Outer Heaven’s latest discharge is a single named “Into Hellfire“, which debuted on Decibel earlier this month through a lyric video.

This is an example of a song whose title represents the music quite accurately. This is a completely hellish and lethal form of apocalyptic death metal, with the kind of hammering striking force that ruptures organs and the kind of malignant buzzing riffs and freakish squealing notes that convey deranged violence.

Speaking of which, the song eventually explodes into a shattering, frenzied mayhem, in which the deep, monstrous guttural vocals are temporarily replaced (thanks to Full of Hell’s Dylan Walker) by the incinerating shrieks of a madman who has been drenched in gasoline and set afire. Yes, your head will want to bang to this track, but it’s also possessed of a chilling, blood-congealing, thoroughly evil atmosphere.

Outer Heaven have promised us a new album in 2018. 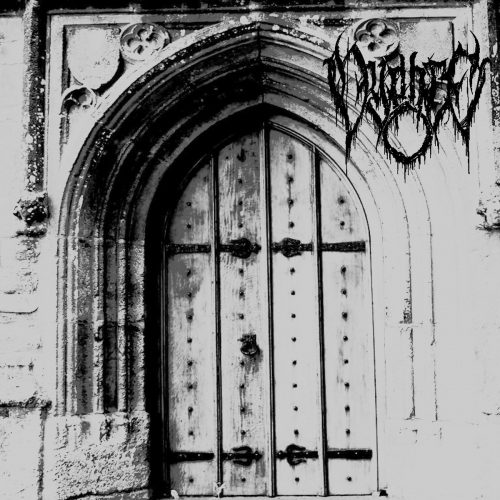 As on many other occasions, I must thank starkweather for recommending the self-titled debut EP of Dyphtê from Montreal, Québec, which was released on October 2. Dyphtê have disclosed very little information about themselves/himself/herself, so I’ll just move right on to the music.

In his message to me, starkweather wrote that the music is “like a raw black metal Voivod or Void Paradigm“. The vocals are as ugly as sin and as mad as a shit-house rat, and the music sometimes boils in a freakish, orgiastic, unpredictable fashion, with riveting drumwork and macabre, discordant riffs that seem hellishly unhinged. There is an intricate, “progressive”-minded, experimental quality to the instrumental acrobatics… but when the maniacal pace of the drumming slows, things often get even more hallucinatory and strangely hypnotic.

And there are, in fact, dramatic and unexpected changes in tempo and rhythm, and in the guitarist’s kaleidoscopic flourishes. There is almost nothing about this music which seems sane, but it is insanely creative, razor-sharp in its execution, absolutely fascinating, and perversely addictive. What an enormous, enormously impressive, and deeply unsettling surprise this is. 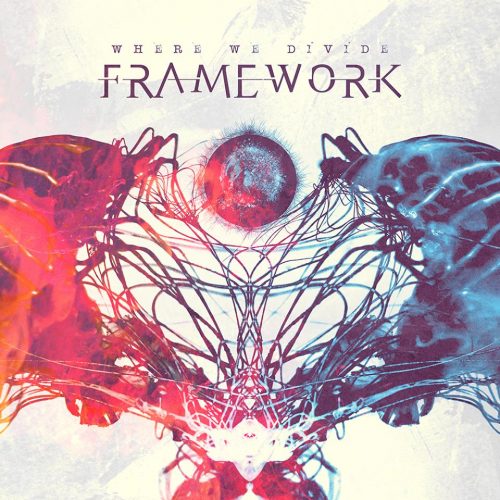 TheMadIsraeli recommended I listen to this next song, by a New Jersey/New York band named Framework whose debut album he showered with praise here back in January 2014, to wit:

“Framework (formerly known as Exorbitance) are the kind of band you listen to if you miss that fast as fuck thrash-based style of melodic death metal you got from bands like Carnal Forge, The Absence, or the most obvious culprit, At The Gates. Their debut under the Framework name, A World Distorted, is a fucking amazing record, showcasing these blood-hungry Americans’ ability to craft melodic death metal that retains the militancy and commitment to crafting brutal, yet epic songs that give you whiplash.”

The new song, “Awakened By the Dawn“, comes from an EP entitled Where We Divide that’s projected for release sometime this month. It includes a guitar solo by Christopher Amott of Armageddon and Arch Enemy.

As the band themselves say, the song is “slower and groovier” than a lot of their other tracks. It’s stunningly powerful, stunningly crushing, and stunningly irresistible in the pure physical impact of the rhythm section and the hard-hitting riffs. It’s a combination of pitch-black darkness, incendiary violence, and the kind of compulsive grooviness that seems to get a hammer lock on the listener’s head.

But there’ s still more to praise here. Just wait until you get to the 2:35 mark, when the vocalist soars into a raw yet melodic refrain and Amott follows with a solo that will blow off the top of your skull. 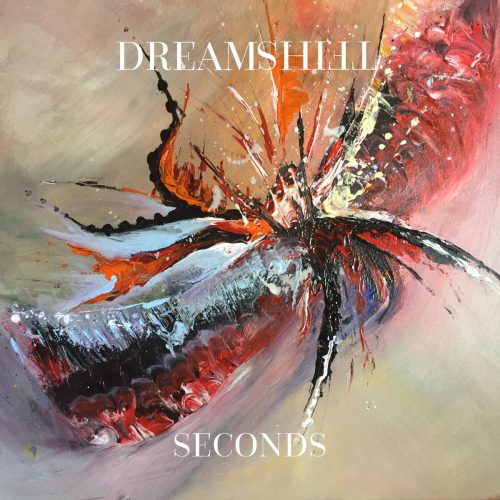 The final selection in this round-up is a song from an album called Seconds by a one-man German band named Dreamshift, released on October 6. When I first discovered the album, it was streaming on Bandcamp, but for some reason the song streams aren’t there any more. However, I did find a full stream of the album on YouTube.

Although you can’t easily navigate among the songs on the YouTube stream, it happens that the one I wanted to write about for this playlist is the opening track, “Flowers“. The lilting acoustic guitar melody that opens the song is light, innocent, glinting like a brook dappled with sunlight through a leafy canopy… and then the drums begin to drive in a fury, a scalding voice vents pure agony, and the riffing surges forward in a torrent of bleak intensity. More changes lie ahead, more shades of emotion and changes in stylistic tone, and I was hooked by the song all the way through.

There will surely be comparisons to Deafheaven, and I guess resort to labels like post-black-metal and blackgaze, though there are elements of DSBM here as well. Whatever labels you might choose to apply, the music is like a spear into the heart. And as good as I think “Flowers” is, it isn’t an outlier. If you like the song, you’re going to be smitten by the rest of the album, which unabashedly wears its heart on its sleeve. There is a magical quality to the melodies; the songs push and pull you in their shifting energies, but they don’t let go.