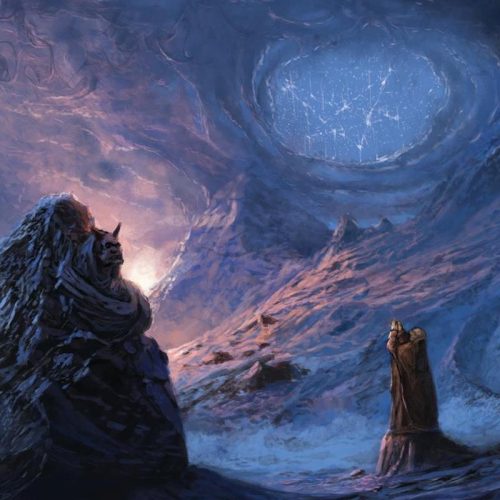 This Austrian melodic black metal band’s self-titled debut album (briefly reviewed here) proved their ability to create powerful, dramatic music that displayed considerable diversity. Now they’re returning with a new album named The Burning Silence (the cover art is above), which will be released by Talheim Records on December 16th. From that album, they’ve recently released “Hubris Virtue” as a digital single and a lyric video. 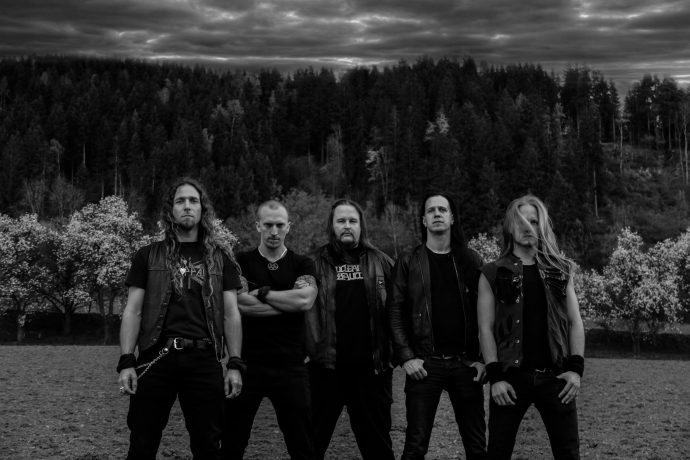 This song is, for want of a better term (and I don’t think there is a better one), epic. When it surges, it has a feeling of mythic warlike grandeur. It’s also quite beautiful, with melancholy melodies that get their hooks in. There’s a potent rhythm section at work here, and some solid gold riffs that rip and jolt, as well as a contrasting tandem of harsh and clean vocals that are both very good.

And it also sounds evil. 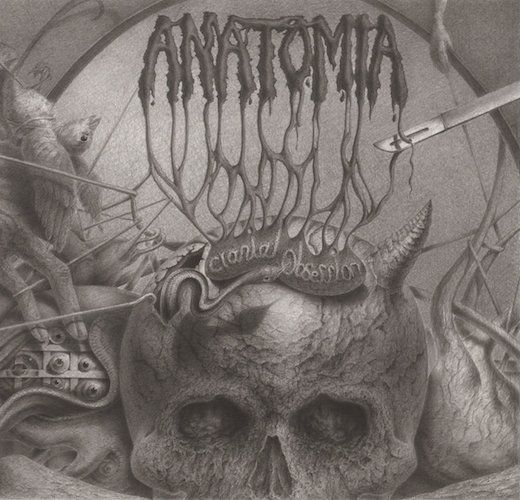 Cranial Obsession is the third album by the Japanese death metal band Anatomia, set for release on October 30 by NWN! Productions on CD and double-vinyl, with a tape version planned for release by Caligari Records. Despite our friend SurgicalBrute extolling the virtues of this band years ago, I still haven’t explored their recordings, but that’s about to change.

Here are two songs from their new album, “Necrotic Incision” and “Morbid Hallucination“. In both tracks, the vocals are monstrously abyssal, methodically uttering foul proclamations (and gurgling and gagging). In the first song the instrumentalists take turns ravaging in a grim fury and dropping into eerie, doom-drenched crawls, while in the second one they switch gears between massive, mid-paced chug-fests (which should come with a “severe neck sprain” warning) and additional ghoulish inflictions of decelerated gloom and misery.

And hell yes, this is evil as hell… and rotten to the core… and lethally infectious. 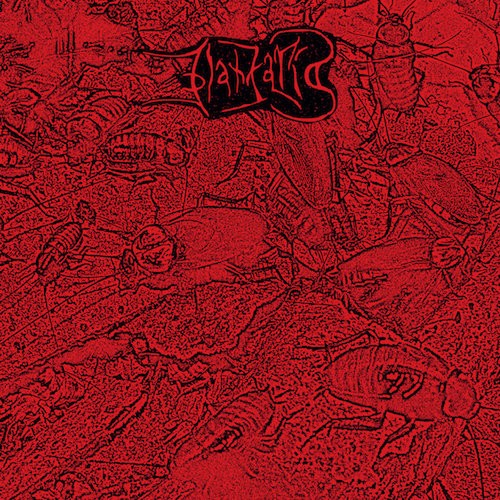 “Blattaria” is the Latin term for the order of insects more commonly known as cockroaches. It’s also the name of a one-man black metal band from Oklahoma City, whose self-titled debut album was released by Fallen Empire Records on October 18. Because I just discovered it on the release date, I haven’t made my way through the entire album even once, but what I’ve heard so far made a very positive impression.

The Bandcamp page for the album describes the music as, “Frenzied and disorienting black metal, frantically striving for nihility”, and that rings true.  The music I’ve heard so far (and the unhinged vocals) sound like the musical embodiment of glorious delirium and derangement, with a pronounced unearthly atmosphere that often becomes hallucinatory.

Blattaria displays not only electrifying technical skill but also tremendous creative exuberance and inventiveness. Often dissonant, impressively intricate, and astutely dynamic, this is a big and welcome surprise. I have a hard time coming up with a reference point, because not many people are doing what Blattaria is doing here, but I’ll name Krallice as at least in the ballpark. 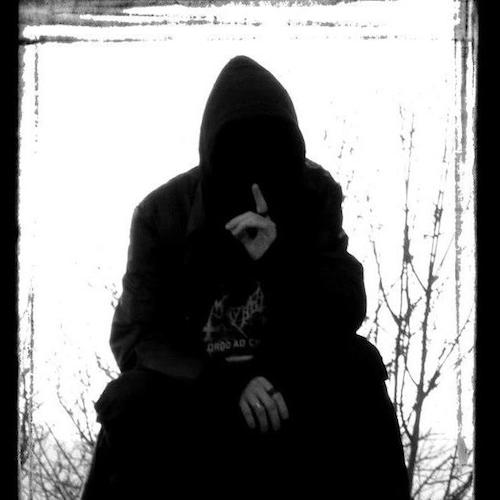 Sercati are a melodic/progressive black metal band from Belgium, whose releases have been chronicling the tale of a fallen angel called The Nightstalker. The Nightstalker is also the name taken by Sercati’s bassist-singer-songwriter Steve “Serpent” Fabry for a solo music project that has produced four albums so far, including one released this year under the title A Journey In Hell (available here).

“Trouble In My Head” is a track from The Nightstalker’s second album, 2014’s The Chronicles of Natural City. For this next video, that track was remixed and remastered with Sercati (and the video includes Sercati members as well as the hooded Nightstalker).

The video itself is a fascinating one. It’s a 360° video, and you’ll figure out pretty quickly that in order to follow what’s happening, you need to use the navigational tool to move around the visuals (and to move up and down within the video). And even then, you’ll miss things the first time as the performers ghost in and out of existence.

But the video is unusual on a second level as well. I don’t understand the marvelous technology that was used here, but as you navigate around the video, the sound changes, with each instrument becoming louder in the mix as you turn toward the person performing it. Credit to Be3D Production for this fascinating creation. (You may have to go directly to YouTube via this link to experience the 360° effects.)

I’m not certain whether the music was intended to convey a sense of evil — from my reading, it appears that in the narrative of The Nightstalker, the character takes upon himself the role of protector of humankind from the forces of evil — but the song sure as hell does sound evil.

Much of that chilling sense of wickedness comes from the nasty goblin rasp of the vocals, but also from the peril conveyed by the gloomy riff that alternates in the music with softer passages (in which a warm, bubbling bass takes the lead) and from the occult air of the clean vocals that are interspersed with those blood-freezing snarls. It’s a mesmerizing piece of music, but a creepy one, too.

In March of this year I impulsively wrote a long review of the debut album by a band from Valdivia, Chile, named Degotten, calling Hexentrost “an absolutely stunning album, a chain of jewels in which there is not one weak link” and “one of the biggest and best surprises of the year so far”. Eight months later, and it still stands out as one of the best and most enjoyable records I’ve heard in 2017.

But this next video is for a song called “I Invoke You, Evil” that first appeared on the band’s debut EP, 2015’s Finsterkult, and was later re-recorded as a 2016 single under the name “Show No Remorse“.

If this song doesn’t get the blood rushing through your veins in a super-heated flood, I’ll be surprised. On that debut album, Degotten proved their ability to mix and match different styles of metal in a remarkably organic way, and they do it again here, with thrash as the backbone but with other ingredients in the mix, too. I’ll also be surprised if you don’t feel like yelling out I INVOKE YOU, EVIL! right along with the vocalist.

The video is a kick to watch, too, and it works really well with this song.

The Bulgarian metal band Eufobia alerted us by e-mail to the release of their new video for a song called “Graveyard“, which appeared on their self-titled album released near the end of last year by the Bulgarian label Wizard.

“Graveyard” is a damned catchy tune, and a damned invigorating one, too. It could be thought of as an adrenaline-fueled centrifuge of melodic death metal, thrash, and groove, capable of spinning your head in a whirl and hammering the hell out of it, too. Very cool guitar solo in here as well.

The video was filmed and directed by Val Volegna, who also worked on Eufobia’s last two videos — “Hater” and “Liquid Of Creation” — which I now want to go track down.

Eufobia tell us that they are currently writing songs for their next record and are playing in Cluj-Napoka and Bucharest on the 16th and 17th of November as support for the great Primordial.