On November 10, Dark Descent Records will release, Deliverance From the Godless Void, the latest album by Finland’s Desolate Shrine. Our man Andy Synn recently reviewed the album (along with the band’s preceding three albums), calling it “another triumph of will and wickedness, and well worth getting hold of if you’ve ever had an urge for a truly masochistic metallic experience.”

And now Norway-based metal writer and NCS contributor Karina Noctum brings us this interview with L.L., the main man behind Desolate Shrine just days before the album’s release:

Did you play all the instruments on the new album?

Yes, I played all the instruments. It´s a natural way to me to get the outcome I want. I consider drums as my main instrument so I could give bass or guitar responsibilities to someone else, but as I write all the songs with guitar I see no reason for that.

Why did you decide to play all the instruments and do the artwork?

I guess because I could, and it felt convenient when we started. Also I wanted to challenge myself and push myself as much as possible. I´m not a good guitar player at all and it was interesting to see if I could pull it off — to play guitars to an album. And as I stated before, drums are my favourite instrument so I can´t let anyone else do the drum tracks, haha. About cover artwork I´d say that was also a challenge to myself. I have been doing all kinds of arts my whole life, so why not the cover artwork myself.

Look at it this way: my two biggest passions are visual arts and music. I´ll do my best to combine them. 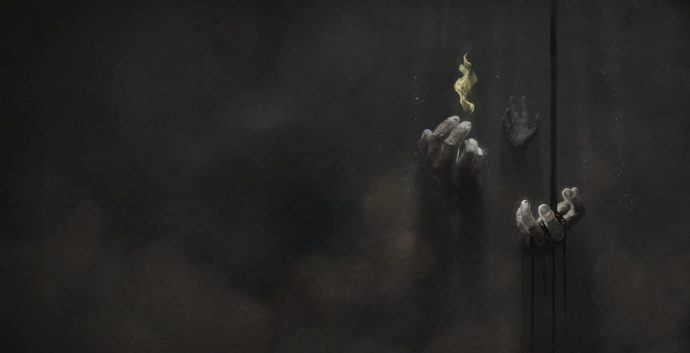 What did it take to become so good at several different arts and instruments?

Well, as stated before I´m pretty average at guitar. I haven´t practiced it ever, just trying out things while writing songs. Bass is basically the same. If someone asked me to play whatever song by other artists, I probably could not. Drumming is natural for me. I don´t have perfect time or technique — not even close — but as a listener I´ve always enjoyed drummers with more natural sound and groovier touch. Mistakes are part of that. And that suits me just fine.

How do you compose?

I tend to compose one to two songs at a time. There are no two songs with the same song structure on our albums, and that´s something I tend to do as long as possible. This way I force myself into thinking what the song really needs and where it should go instead of lazily combining riffs and repeating them. It´s a really intuitive process. 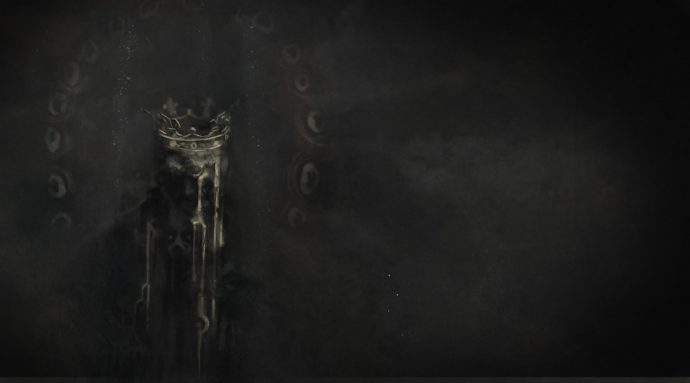 What are the advantages of being the sole person behind the music when it comes to composing? Are there any disadvantages?

Total control. I may do whatever I want while composing. Start from one idea and end at something completely else. I don´t need to compromise at all. The disadvantage is that it´s a lot of work. Every single time I finish an album I swear to myself that next time someone else does the art, drums, recording, whatever. That train of thought dies quite quickly though. Also I´m not able to jam at the rehearsal place and create songs in a more traditional way. Sometimes that´s something I miss but Desolate Shrine is not the band for that.

What are the lyrics all about and what do they mean to you personally?

Just like Tenebrous Towers was about madness for the most part and The Sanctum of Human Darkness is pretty self explanatory, the new album has an overarching theme behind its lyrics.

Some of us have had an incredibly challenging few years that have forced us, especially the one writing the lyrics, to dig deep, tear everything apart, and face the pain. To face overwhelming challenges and odds and rebuild from there.

How does the artwork relate to the lyrical themex?

I always start the (artwork) process by reading the lyrics. From there the main themes arise and then it´s a matter of letting the subconscious do the work. The lyrics, artwork, and music are the (un)holy trinity for us.

Finland is known for a particular metal style much more related to heavy metal and folk. What do you think about this style?

Not my thing — at all. It´s extremely popular around the world but it´s definitely not for me. I like some heavy metal for sure, but I´d rather stick with older classics.

What do you think makes DS stand from other DM bands?

We do have a well thought-out overall concept at all times. All the pieces of the puzzle must fit together. We do not do anything the easy way. We are not easy-listening, head-banging metal, but instead demand time and effort to get into. Whether it´s a good or bad thing, we could not do our thing any other way.

Are there any chances of seeing DS live, any touring plans in the future?

For now we don´t have live plans but nothing is set in stone.