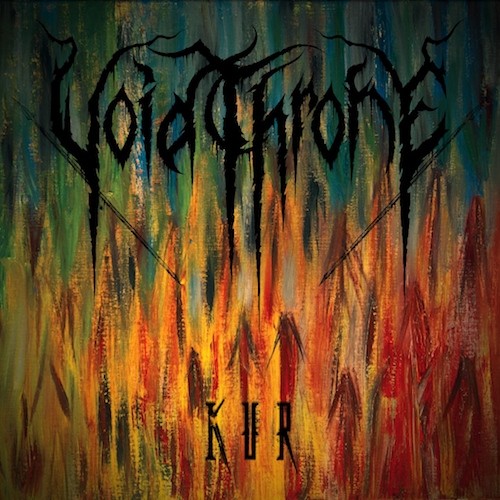 “By the end of Kur,” Voidthrone explain, “it is our intent to leave both listener and performer drained. Within this receptive exhaustion, we leave a spark — a seed of discontent that rejects normality. A hunger engendered for the other side of the veil. Beyond which — an absolute darkness, filled with Lions and Tigers and Bears. Oh my!”

The close of that last sentence may be the only time you smile at the experience of Kur, their new EP. Oh, maybe a somewhat crazed smile of appreciation for what this Seattle band have accomplished, but the music itself (which combines elements of black and death metal) is a disorienting, disturbing, and even terrifying experience, combining head-spinning intricacy, unsettling dissonance, and raw emotional intensity.

As for the band’s objective, it may not take a complete trip through all four songs to leave you feeling drained. The title track of the EP that we’re premiering today in advance of its May 4 release, especially when experienced along with the freakish music video that accompanies it, will probably take care of that all by itself. 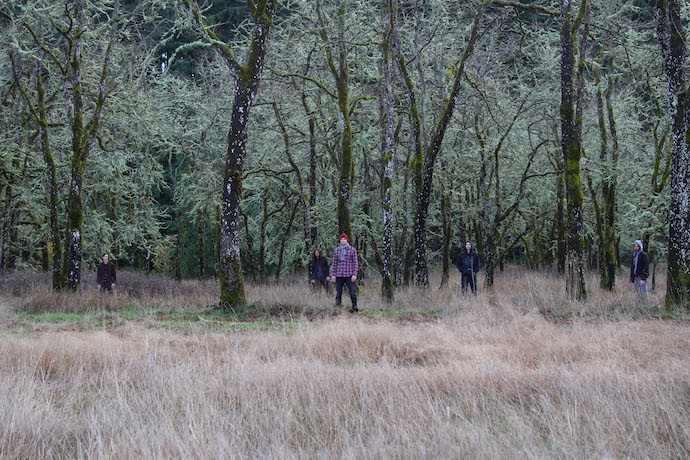 I had some warning about what Voidthrone were going to do to me in this song, because I was familiar with their 2016 debut album Spiritual War Tactics, an album I described here as “a huge late-year stunner that should not be missed”, an album that succeeded in “creating an atmospheric shroud of chilling horror and ravenous fury, mixing cadaverous roars and blood-curdling shrieks, claustrophobic crawls and blood-spraying frenzies”, and one in which Voidthrone packed “lots of dynamic changes and kaleidoscopic textures, as well as an array of dismal melodies that burrow under the skin like parasites”. It was, I wrote, “an inventive, progressive-minded manifesto of pestilence and bestiality”.

“Kur“, the song, builds on the remarkable foundations of that album. In a nutshell, it’s explosive and terrifying. It seems that all aspects of the music (and the video) were designed to slash the listener’s sanity to shred, at least for eight minutes, everything geared toward pitching you into an intensely destabilizing musical maelstrom.

Dissonance plays a big role in the song. The roaring riffs and sinister leads sound alien and unhinged, as do the flurries of fret-darting dementia. The atmosphere of eerie, berserker chaos is made even more staggering by the changing vocals, which channel incinerating ferocity and horrible agony, and by the eruptions of maniacal drumming.

The fast-cutting video (by GreyLane Media) just makes the experience more unnerving, casting the band in shades of red and black, throwing up mysterious menacing designs, and eventually bathing the vocalist in torrents of blood.

Here is Voidthrone’s further statement about Kur, which of course goes beyond the title track we’re premiering (this will be the only single revealed in advance of the EP’s release):

“Musically, Kur builds on Voidthrone’s previous release. It contrasts established, repeated central riffs and textures with the drawn-out onslaught of sounds unfamiliar to the listener. It is with this approach that we strive to master a very certain art: that of the journey from beginning to end, from substance to emptiness.

“This requires embracing the emotional lows equally well as the highs. We write what feels natural to channel, but unnatural in relation to mainstream extreme metal. Our goal is to create unique and dissonant music that retains traditional elements of our genre without a pretentious air.

“Lyrically, the album is an exploration of isolation and desolation. The songs touch on utter psychological collapse; an untethering from the reality, society, self. Kur begins from the perspective of an everyman, focused on some MacGuffin of enlightenment — religious, personal, scientific, universal, etc. As with any monkey paw story, there is a perverse result — obsession, madness, and unholy subterfuge. The concrete narrative quickly melts away into expressionistic confusion and chaos. The meaning and music assimilate and fully delve into tones of frantic terror and seething psychological sickness.”

The album cover, which suits the music, is an abstract painting created by the band at the beginning of the songwriting process, “a visual representation of the root feelings that we used as the groundwork for the aural assault of Kur. It is the preface of the chaotic emotional state that we aim to cultivate”.

You’ll find a pre-order link below, and the track list, and then the opportunity to enter Hell by pressing play.