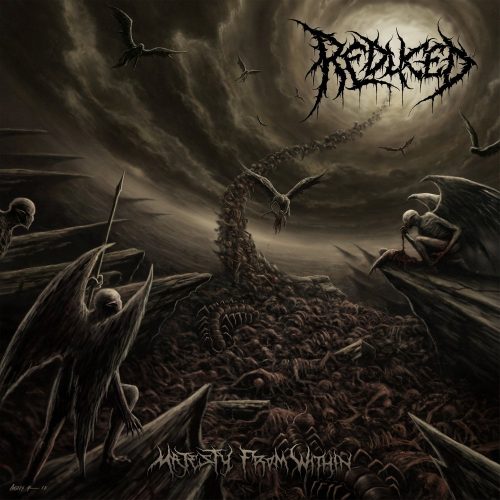 (Vonlughlio is back, and this time he brings us a review of the new album by the Indonesian brutal death metal band Reduced.)

This time around for NCS, I have the opportunity to write about a release from New Standard Elite, a BDM label that first began operations back in 2012. In those early days, I began talking to label owner Daniel (also the drummer for Inherit Disease) about BDM in general, bands we liked, and what he had envisioned for his label.

As time passed , the label signed amazing bands like Gorgasm, Cerebral Effusion, Disentomb, Seminal Embalmment, Chalera, Vulnus, Abnormal Inhumane, Hymenotomy, Nithing, Excoriation, and Abhorrent Castigation, to name only a few, and gained recognition around BDM as one of the best, and a favorite among fans around the globe. Of course, like anything in life, there are moments of difficulty, and the label was no exception to the rule. 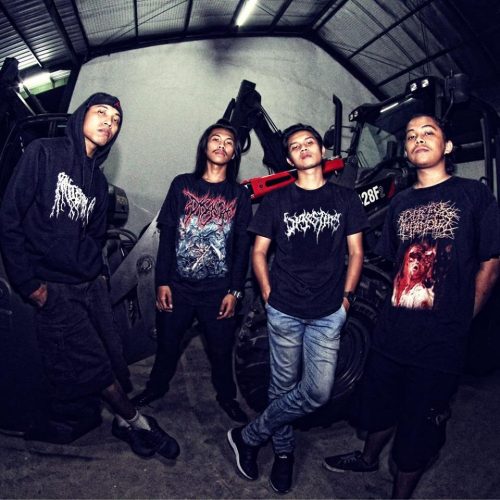 Without delving into details, orders were somewhat delayed (the label always gave updates about the situation) and some people got pissed. Adding to this was the signing of a band some were not fond off, and that caused further drama. But as for me, I stayed quiet and never lost faith in the vision Daniel had for the label, confident that he would get through the challenges. Time has passed and now things are back to normal — and I can’t wait for the releases NSE has for 2018. I reviewed Chalera’s and Unbirth’s new albums at Blast Family, and now have the opportunity to review Reduced‘s sophomore effort, Majesty from Within.

The band’s inception was back in 2013, and they are from Jember, East Java, Indonesia. They released demos in 2014 and 2015 that just swept away the BDM community, leading to praise from around the globe. Then in 2015 they released their debut album, Gradually Executed, which reminded me of the good old days back in the 2000s.  The raw sound that gives more power to the blast beasts along with some nasty riffs, and vocals to die for, are what IDDM is all about.  Then in 2016 they released a single and announced NSE as their new label, and words could hardly describe my level of excitement generated by this news

So here we are with their new release. Does it live up to the hype? Is it better than their previous effort? Well, let me tell you that this new opus is way better. It reminds me again of the BDM sound of the 2000s but does more than that. With a total of 8 songs and a Disgorge cover, these 31 minutes of BDM madness are just what the doctor prescribed. Reduced have created a sound that brings both nostalgia and a level of uniqueness that is hard to find these days. Alongside label mates Chalera, Reduced are the best of the best of what the IDDM scene has to offer.

The riffs and the drumming show a level of well-executed complexity in the song structure, and the vocals are over the top (in a good way), which gives punch to the straightforward delivery that makes this band unique. This time around the drums sound more natural than raw, and that alone (for me) increases the intensity of the songs.

So dear reader, if you are into BDM or thinking about giving the genre a chance I suggest you check out NSE‘s roster of bands and give them a listen. Also, do check out Reduced ‘s new album, along with their previous material. They and Chalera  are perfect representations of Indonesian Brutal Death Metal.

3 Responses to “REDUCED: “MAJESTY FROM WITHIN””