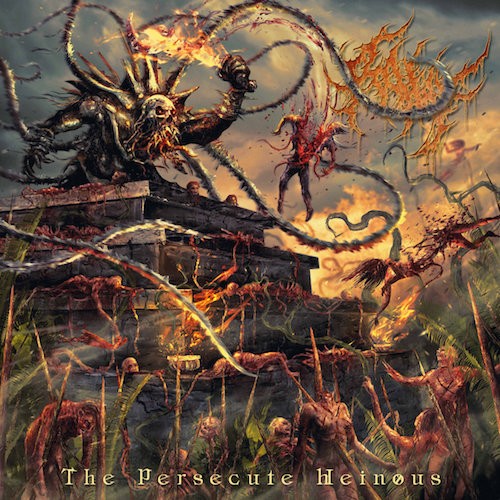 Today’s write-up is about the debut of the Indonesian Brutal Death Metal band Raw entitled The Persecute Heinous, set to be released via Brutal Mind on August 31st. But before we get into that gem of BDM, I want to talk about the label.

Brutal Mind is an Indonesian label established in 2009 and their main chief, Mr. Deni Lisain, is well-respected in the scene, due to his hard work and dedication to the genre. How he has been able through the years to amass fans from around the world is something amazing.

The label’s main focus, as you have guessed, is Brutal Death Metal, and the bands on their roster mainly come from Indonesia, and some from Taiwan. They also serve as a distro and put out a lot of merch — I mean a LOT!!!!!!.

One of the things I like about the Indonesian scene is how dedicated they are to the music and the artists, whether local or international it does not matter. They will support, go to shows, and basically breathe, eat, and live the genre like no one else. Brutal Mind is a singular representation of that ethic; the man is a living embodiment of a brutal mind itself, and always tries to support the fans’ interests (with both music and merch).

I found out about the lable more than five years ago, give or take, and can tell you that doing orders is easy and they arrive rather fast. I’ve never had any issues whatsoever, and I know that other fans from around the globe feel the same way.

And now, as I mentioned in my opening paragraph, I am fortunate to review the music of Raw, a one-man project conducted by Mr. Aditya Prakoso (Gerogot and Brain Damage) who performs vocals, guitars, and drums — everything necessary to bring his vision to life.

When I heard Raw’s promo song for the album, I was just blown away. It was fast and displayed diverse riffing, and the vocals were just what you would imagine the monster on the cover would sound like, just furiously pissed-off at humanity.  So when I got the chance to listen to the whole full-length, I was ecstatic and could not pass up the opportunity to help spread the word about it.

The first thing I must confess, and this may be a turn-off to some, is that I wish the album were longer, but that is the only issue I have with it. I managed to satisfy the desire for more music by listening to it three times in a row on the first listen. That’s how good this album is — no fillers whatsoever, just an intro and then the pure madness comes in.

All of the work is connected, from the song titles to the cover art to the music. The songs are fast, with punishing blast-beats, riffs that are just godly, and vocal patterns that are well-established in each act of this story. In one of the songs (one of my favorites from this album), there is also an appearance by vocalist Javy of Carnivorous Voracity.

Although this album might be short, it’s addictive, thanks to how the songs are structured and the production quality, which gives you that extra punch that makes it easy to headbang throughout the whole thing. If you dissect the songs and listen closely to the riffs and vocals, you can hear the changes that occur, which also keeps the listener fully engaged and, as the end result, enjoying everything.

I am looking forward to seeing the next installment for this project, and I shall continue to support. And please check out Brutal Mind’s Bandcamp, Facebook, and Instagram pages.

One Response to “RAW: “THE PERSECUTE HEINOUS””