“Check this steamroller. Nasum-like grind with choppy tech riffs to break things up. Complete barbarian war vocals. From Tunisia. What the hell, Omination, Ayyur, and now this….” 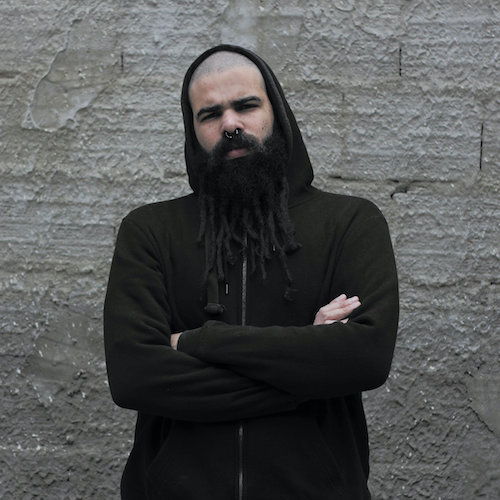 And that’s how Rennie from starkweather introduced me to this solo project of Tunisian musician Mahdi Riahi, who did everything for this album by I the Intruder (released on April 27th), down to the mixing, mastering, and artwork.

The music will blast the flesh from your body with hurricane-strength gales of jet-speed riffing and then jackhammer the bones into dust while Riahi bellows at you for not putting up a better fight. I the Intruder also laces the mauling mayhem with bursts of groove, fast tempo changes, and attention-grabbing leads that shriek, blare, dart, and slither. One of the most electrifying experiences you can have, short of dropping the plugged-in hair-dryer into the bath with you because being shut in has bored you shitless.

“With The Sanguinary Impetus we have created our most complex album to date. We had strayed pretty far from our style musically with Disposal of the Dead/Dharmata and felt a strong urge to pick up where we left off with Passages Into Deformity and expand on the trademark DS sound.”

The album is set for a July 24 release by Willowtip Records.

Hot on the heels of the eye-popping Kinesis EP released in March, Portland’s Omnikinetic has returned with “The Drowning Of Edna Pontellier“, a single whose title seems to be a reference to the ambiguous finale of Kate Chopin‘s 1899 novel The Awakening, a landmark work of early feminism. It makes for a good follow-on to that Vassafor track.

Gargoyle vocal horrors echo above murky, mutant riffing and turbocharged drumming, with a kind of stomping, imperious mid-section (still interspersed with bursts of 1000 bpm percussion) that then leads into something unexpected. I’ll just let you discover what that is for yourselves — in my mind it does connect with what happens at the end of The Awakening. (If you’re not keeping a close eye on what Omnikinetic is up to, you ought to correct that oversight ASAP.)

To state the painfully obvious, one of the worst things about the current plague is that it has snuffed out live metal shows for the indefinite future. Some bands are trying to fill that gap by releasing footage of live shows from the glory days before we all got shut in. One of those bands is the tremendous Greek death metal group Abyssus, who have unveiled a film of their entire performance at the Piraeus 117 Academy in Athens on January 26 of this year.

I’ve hailed this band plenty of times in the past at NCS — and will be doing it again soon, because they’ve got a new EP coming out via Death In Pieces Records. But in the meantime, if you want to get yourselves fired up with top-shelf live death metal of the old school performed in a big packed venue, look no further — this new film will fix you up. Here’s the set list:

Warsaw quartet Clairvoyance released their debut demo on May 3rd, and it’s a big eye-opener. Clairvoyance favor old-school stylings and cavernous vocals, delivering music that alternates between chaotic savagery, rampaging gallops, and sickening, putrescent crawls. It has the aroma of festering disease and putrescent rot, with a stench that lingers, and does a fine job of elevating a listener’s pulse-rate too. Not breaking any molds, but they spin the ghastly old potter’s wheel with such impressive song-writing and performance skill that it doesn’t matter.

UPDATE: The Clairvoyance demo will now be released on tape by Caligari Records:

“Holocaust Winds” is fast and ferocious lunacy, loaded with fleet-fingered fretwork dementia, obliterating drum attacks, and mangling guitar tones, augmented by howling-wolf vocals and a spooky, horror-driven, off-speed interlude. “Circle of the Serpent” is in a similar vein, littered with feverishly wailing guitar solos and fanfares of devilish grandeur.

To cap the split, Sepulchral Frost keep things in the red zone with a vicious, blazing thrasher that’s a huge adrenaline rush, and also benefits from unhinged vocals and the infiltration of dark melody even when it’s going full-speed. But it also slows into a staggering lurch, and then the mood gets orders of magnitude more miserable.

The split will get vinyl release on July 14 but is available now as a digital download (via Helter Skelter Productions).

“Furiously fragmented”. That’s a phrase that appeared in the press materials for the new VoidCeremony album, and it kind of hits the nail on the head with respect to this next song, “Desiccated Whispers“. It doesn’t proceed in a straight line, quickening and slowing and quickening again without warning, and it includes a cornucopia of instrumental acrobatics — without diminishing the aura of diaboloical and carnivorous cruelty that saturates this wild escapade.

The track stands out for a bunch of reasons, but maybe the most signal one is the fretless bass performance of Damon Good (Mournful Congregation, Stargazer), who joins the two members of Ascended Dead who are the core of the band.

This San Diego trio of Trevor Van Hook (guitar, vocals), Zachary Sanders (bass, guitar, leads), and Marie McAuliffe (vocals, drum programming) have struck again. I briefly reviewed their debut EP (The One Reborn) last August, which drew obvious influence from Morbid Angel and Carcass, and especially for a first release it stood out from the pack.

This new EP, Devourer of Gods (released on May 1), solidifies all the favorable impressions of the debut. Top-notch song-writing, impressive instrumental execution (including deft drum programming), a riveting tandem of roars and screams in the vocal department, and a spirit that’s faithful to the old gods without sounding like just a rehash. And speaking of the old gods, the third track is a riveting cover of an At the Gates song (“Windows”).

Last December I concluded another one of these round-ups with a gruesome video for a single called “The Flayed Man“, which was digitally released by the British Columbia melodic death/thrash band Liberatia, who have been inspired by the likes of The Black Dahlia Murder, At The Gates, Dethklok, Havok, Archspire, and Beyond Creation. On May 1st Liberatia released a second single and video, so it just made sense to conclude this round-up with it too.

Lyrically, the new song (“Adaptive Biology“) is a tale of mutated horror. Musically, the song is a kick to hear and a quickly addictive number, combining gruff and gruesome vocals and a mix of fast-darting and fluidly swirling riffs, along with hard-charging, fast-changing drumwork. As for the video, let’s just say it’s a big switch from the band’s last one.

It appears that both “The Flayed Man” and “Adaptive Biology” will be included on an upcoming EP entitled Where the Wretched Lie Slain.