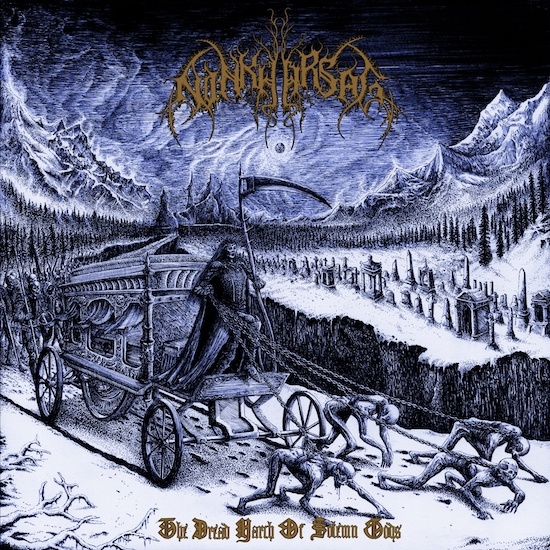 Every year brings debut releases from up-and-coming bands that put a jolt of electricity into hungry fans and fortify the conviction that heavy music is alive and well. That’s already happening in 2021, bolstering those of us who believe that, for whatever reason, metal is in the midst of another Renaissance.

Having said that, we all get just as big a jolt from the return of bands who’ve given us thrills and chills in previous years, and that’s definitely true of the UK group Ninkharsag.

Andy Synn reviewed their 2015 album Blood of Celestial Kings for us, acclaiming it as a proud standard-bearer in the lineage of such bands as Dissection and Absu: “They’re not afraid of a big, bold, brutally effective hook when they come across one, as the nine songs which make up their debut album are positively bursting at the seams with brash, full-throttle riffs and coldly intoxicating melodies… as well as a hefty helping of pure blackened spite and vitriol”. 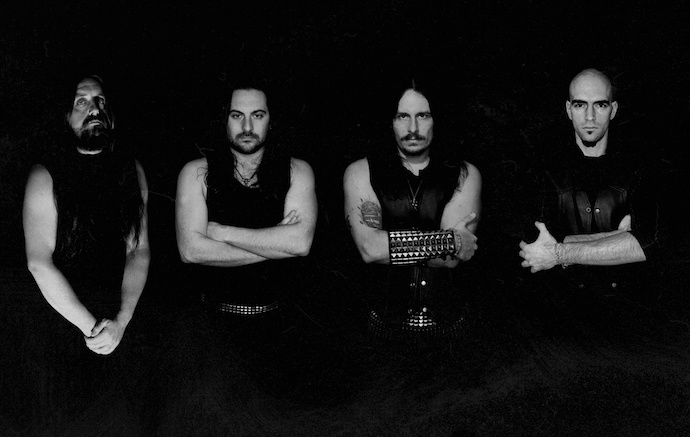 Ninkharsag followed that eye-opening first full-length with a 2020 EP named Discipline Through Black Sorcery, which I praised here for its “blazing, high-flying extravagance”, its mix of stylistic ingredients “including hints of power-metal sword-and-sorcery grandiosity”, its plethora of hooks, and its “bursts of derangement and flurries of beleaguered melody”.

And now the band are indeed returning, with a new album entitled The Dread March of Solemn Gods, which is set for an April 30 release by Vendetta Records. Not for naught does the advance publicity make reference to such precursors as Mercyful Fate, Bathory, and Metallica, as well as Emperor, Dissection, and Mayhem. It is an album that draws upon more than classic black metal for its strengths, and the result is indeed “a huge album full of wild, rousing anthems, massive, hook-laden riffs and a somber, nocturnal beauty”.

You’ll get a good preview of what the album will bring your way (or at least part of what it brings your way) through “Strigoi Diabolicum“, the song we’re premiering today. 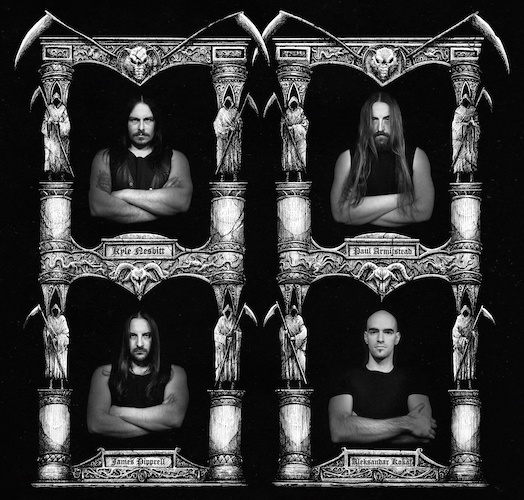 Ninkharsag introduce you to this new track with these words:

“The song ‘Strigoi Diabolicum‘ is a mighty anthem written to explore the animalistic nature of man; to overcome adversity with the ferocity of a unchained and hungry wolf at whatever cost. It is about casting off the shell of weak human flesh to become a being higher and with more purpose than the feeble sheep which inhabit the Earth. Although this transformation may lead to expulsion from the circles of men, it is better to live free than to die a slave to a vile, corrupt way of life.”

This particular song further cements the band’s reputation as an heir to Dissection. A sense of wintry bleakness and gloom shrouds its opening moments, but it catches fire and begins to blaze in a diabolical assault of scorching screams, frenzied riffing, and hammering drums. That feeling of unchained ferocity howls through the music like a freezing gale, yet as the energy of the onslaught ebbs and flows the band also create sensations of despondency and despair, as well as a kind of glorious, soaring defiance that will not be denied.

The Dread March of Solemn Gods was recorded and produced in 2019 at Foel Studios under the helm of Chris Fielding (Conan, Winterfylleth, Primordial). As mentioned, it will be released on April 30th by Vendetta Records, and it’s available for pre-order from the label and the band now.

And finally, we encourage you to listen to the album’s previously released track “Under the Dead of Night“, which is available to stream below the following links.