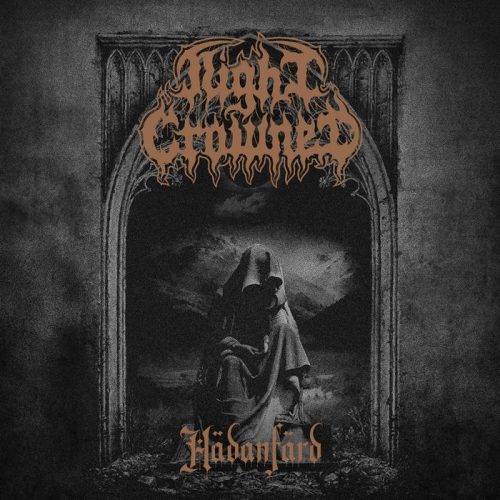 (This is DGR’s review of the new album by the Swedish band Night Crowned, which is out now on the Noble Demon label.)

It doesn’t seem like it was that long ago that we found ourselves checking in with Night Crowned and their first full-length release, Impius Viam. Granted; a large part of that feeling is attributable to us missing the boat on the late-February release and coming around to it eight months later. Yet even considering that,  you’d have to admit that returning to the stage a year and a half later with a follow-up release is a pretty quick turnaround time.

That prospect can be terrifying, since albums released year-over-year can be pretty hit-or-miss depending on how prolific the musician is, and on top of that last year was just generally a fucking mess.  When given such a massive amount of time to be trapped inside, what else is a musician likely to do other than create, and it seems like that is the path Night Crowned chose.

The group’s second full-length came out via Noble Demon in early July and plays fully into the moodier-sibling aspect that one expects from any growing family. Bearing album art now fully in black and white, lyrics and song titles mostly in Swedish, and a less-packed run time where the only peaceful bit is the title song, Hädanfärd is a ferocious follow-up. It leans much more on the extreme side of things, and save for a few surprising deviations with clean vocal lines, it is the sort of release that never lets up, playing fully into the apocalyptic blastfest one expects from a group veering further into their black-metal inspirations. 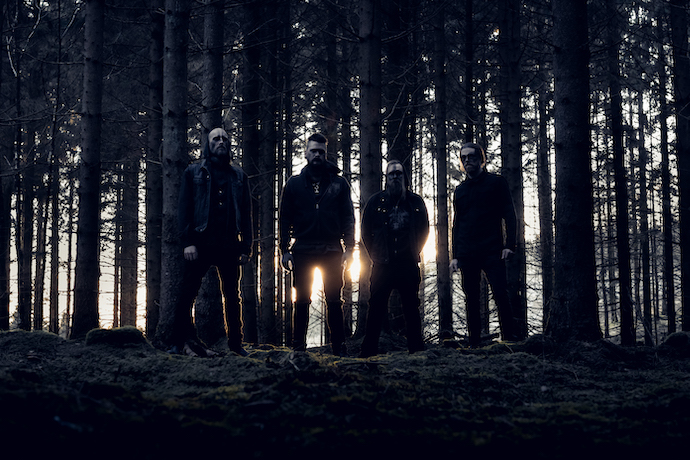 To say that Hädanfärd picks up where Impius Viam left off is an understatement. “Nattkrönt” starts the event off with a firm statement of the sort of blast-happy pyrotechnics that make up much of Night Crowned‘s sound. The vocal work is delivered at both high-snarl and high-speed equally, allowing frontman Ken Romlin to hammer out line after line at a ceaseless pace so that it keeps up with the guitar attack that’s sawing its way through the song as a whole. The group haven’t lost their ear for melodic lines in the transition between albums, it’s just that “Nattkrönt” has a little something more to prove on the black metal front this time around.

That is also a pretty good descriptor for Hädanfärd as a whole though. The group’s trademarks remain the same in the year-over-year churn – they even give the clean-sung vocals a bigger spotlight, though they appear less frequently – but it feels like the band really wanted to express their black metal influences this time, so it’s less chunky guitar riffs and more straightforward table saw. You’ll notice throughout much of Hädanfärd that the band break out quite a few from the booklet of black metal guitar riffs, so it  leans a little into the genre-comfort-zone while combining that with the group’s penchant for a massive rhythm-section chug every handful of minutes.

“Rex Tenebrae” also makes use of the group’s talent for clean vocals during the song’s bridge, but is otherwise just as relentless as the first handful of songs within Hädanfärd – the album as a whole very neatly divided by its middle instrumental track, with four blistering assaults on each side.

The sixth song in the running – “Gudars skymning” – showed itself to be a late album highlight. It most finely treads the line between Night Crowned‘s previous album and this one, combining the two differing styles almost perfectly while veering a little closer to the death-infused melodicism of Impius Viam. That opening guitar melody that worms its way through the initial assault to the gigantic closing back third is hard to deny – especially once the drums really start rolling and the band rest themselves on a wall of bombast before shifting back into one final bludgeoning to send the song out. As a sort of ‘welcome back’ after the brief halfway intermission, “Gudars skymning” is near-perfect for the position it holds. 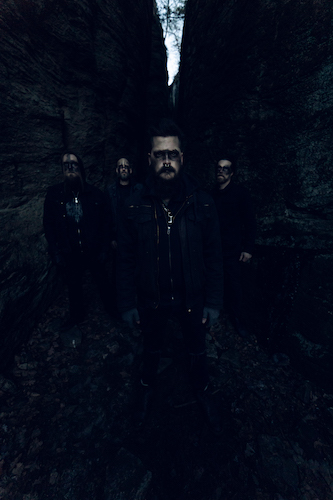 “Enslingen” closes Hädanfärd, but does so in the most cruel way possible by leaving you wanting more – which is hilarious, given one of the initial marks against Impius Viam was that it was a little long in the tooth. “Enslingen” is one of those massive songs that is a great way to send an album out. Although Hädanfärd doesn’t build up to it – although many albums seem to build up to their final song, Hädanfärd is pretty much always at an extremely heavy clip – “Enslingen” still plays out like the official closing event of the disc. It does the previous few songs in a microcosm, delivering big riffs, huge melodic lines, and plenty of blasting sections that could make a new quarry out of the side of a mountain.

Hädanfärd is the type of release that doesn’t feel like a traditional follow up. It is more of an expansion of ideas that were already present and gives them opportunity to truly come into their own. The previously mentioned sense that Hädanfärd is a moodier, younger sibling is in large part because it’s a scrappier disc. It’s written so that from moment one, the Night Crowned crew have effectively placed a cinder block on the accelerator and duct-taped you to the driver’s seat. It’s almost non-stop in its assault, the sort of album that comes from a world of ‘what if we just went even faster and louder than before?’. The group don’t lose their sense of dynamics, but instead it is all done in service of the blistering pace that Night Crowned maintain throughout the release.

At a much slimmer forty-five minutes, Hädanfärd still hammers a ton of music into its nine songs. It isn’t just an album that is of the “hey, here’s more music that you already liked” style. It’s more of a “Hey, here’s more music that you already liked…but much, much meaner”. If you thought Impius Viam spent too much time prettying itself up by daring to have a few prominent keyboard lines throughout, then after the first few songs on Hädanfärd,  you should be left a lot more interested.