To begin, we worship in the “Church of Horror“, the first song from the first album by Aeon in nine years. It’s a fast one, with a blazing blizzard of jittery riffing and skull-assaulting drums providing the accompaniment to guttural fury directed against pedophile priests and the church that’s sheltered them. Bits of dismal melody and jolting slamtastic groove play a role in this outraged musical tirade, along with a queasy and maniacally quivering solo. If your ass is dragging, this will fix that for you. 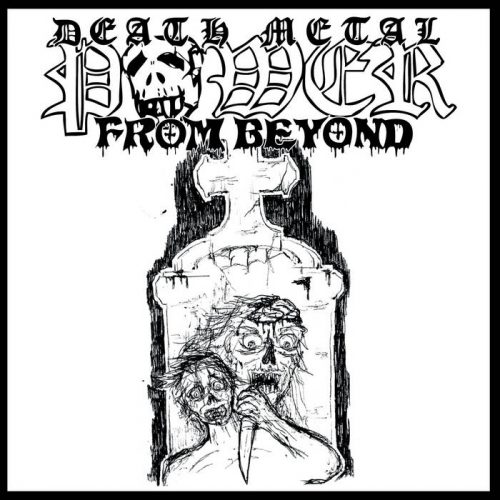 The next song, “Dødskunst“, by the ever-awesome, ever-foul Undergang, is the first one released from a 16-track, 67-minute compilation called Death Metal Power From Beyond, assembled by Horror Pain Gore Death Productions and MCDT Company. Slow, vaporous, and eerily gloomy at first, it quickly grows much heavier when the rhythm section join in, and then the guitars writhe and moan in piercing, soul-stricken fashion — with some pile-driving, spine-shaking punishment injected for good measure.

The music proceeds to maul, gauge, and jump about like cavorting demons, with all manner of croaking subterranean horrors coming out of David Torturdød‘s throat. The band also spend some time slowly dragging you by your hair through a pit of thick, congealing viscera.

In addition to Undergang’s song, the comp includes 15 other new and exclusive tracks, from this ravaging lineup of bands: 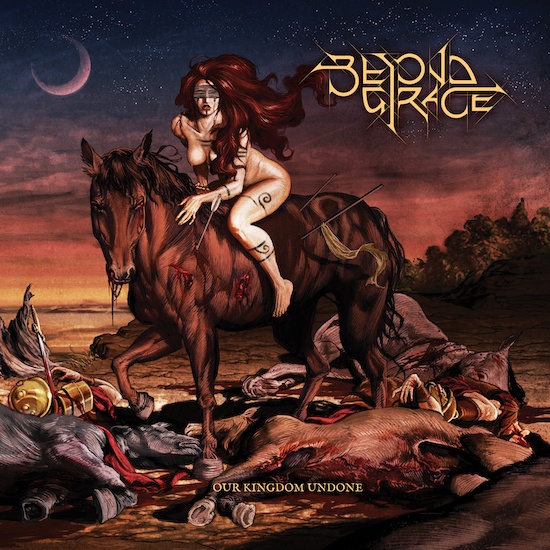 Yesterday Distorted Sound Magazine premiered an eye-catching lyric video for a track from the new Beyond Grace album named “Barmecide Feast“, featuring artwork by the ultra-talented Kim Holm, and words by our own Andy Synn, who you probably know by now is the band’s vocalist and lyricist (and who’s interviewed in that article at Distorted Sound).

This is a furious song that will mercilessly jackhammer you into the ground, though it’s also sprinkled with bits of eerie, desolate melody, a weird duet between jittery guitars and a burbling bass (where the normally bestial Andy sounds like he’s being garroted with razor wire), spasms of frenetic fretwork and tumultuous percussion, and a freakish but still spellbinding solo. It’s a hook-filled thriller of a song, but a disturbing one at the same time.

The album is Our Kingdom Undone, and it’s set for release on September 3rd by Prosthetic Records. 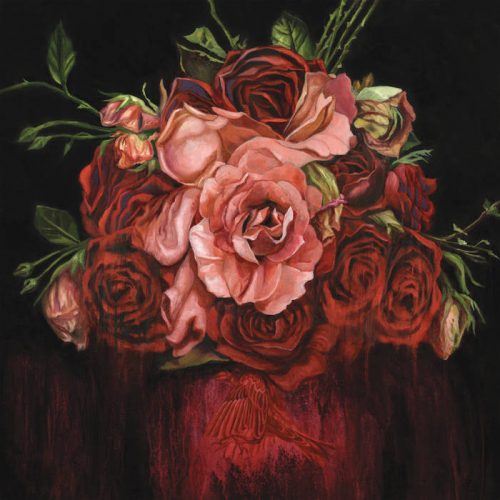 WAIT! Don’t skip this next song. I know there are roses on the cover, and you might have seen references to “romanticism” and “goth” in the label description of the record, but bear in mind that the band includes members of Horrendous and Crypt Sermon, and then lend your ears to “Fallow“.

It doesn’t sound romantic at first, unless perhaps you’re a necromantic. All the instrumental maneuvers are fascinating, but unnerving, and the disturbances within those combined sounds become more extreme as the drums begin blasting away and the guitars wail. The avant-garde (for want of a better word) escapades of the instrumentalists just get more and more interesting, though the hair-raising screams ensure that you’re not going to get too comfortable no matter how enthralled you may become by the madness and the magic that have been given free rein in the song, or by the singing and soloing, both of which are great. Man, what a wonderfully gripping and head-spinning song this is!

From the forthcoming debut, Ward of Roses, to be released on October 15th (CD and digital) by Gilead Media (with vinyl coming later). The floral cover art was made by Paul Romano. 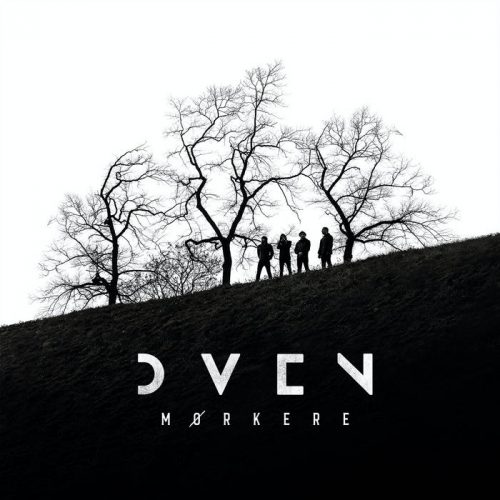 The line-up of Dold Vorde Ens Navn includes people who have been or are still members of Dødheimsgard, Ulver, Satyricon, Ved Buens Ende, and Strid. Are you not intrigued by that info? I sure was, especially since I overlooked the band’s 2019 debut EP Gjengangere i hjertets mørke. The next song, “Løgnenes abstinenser” (“Withdrawal Symptoms from the Objective of Lies”) adds to the intrigue.

The pop of the snare will get your head popping too, like a bursting bubble, while the riffing is like a sunrise — shining and gleaming, spreading its rays in splendid fashion. Yes, there’s a black vein of despair running through the melody, and the mind-clawing vocals are shattering to hear in all their ugliness and rage. But the song also includes clean vocal harmonies that in their own way are just as transfixing as the darting, rippling, and cascading shine of the melodies. It’s such an enthralling song, and one I’ve come back to repeatedly since first encountering it.

This song is from the album Mørkere (“Darker”), which Lupus Lounge will release on November 12th. 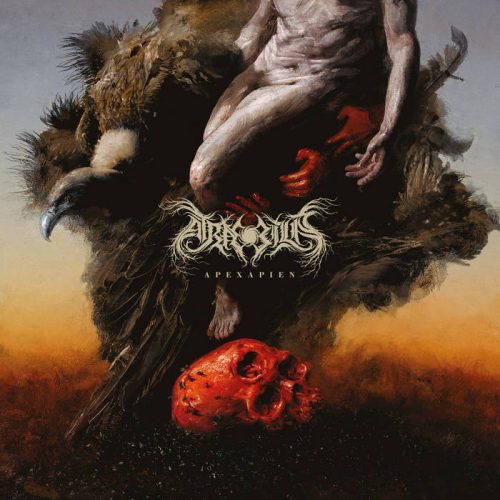 We’ve already exposed you to a lot of great cover art in today’s collection, and we’re obviously not finished. That astonishing painting up there is by Berlin-based Eliran Kantor. It graces the cover of Apexapien, the debut album by Vancouver-based Atræ Bilis.

The album’s first single, “Lore Beyond Bone“, is absolutely ferocious — decimating and crushing in the savagery of its assault, with roaring vocals that are just as vicious as the obliterating drums and frenzied, scathing riffage. The band lace the music with dissonant squirming and darting arpeggios, grim unearthly melodic cascades, and bursts of militaristic snare work. Without ever lessening the destructive intensity of the barrage, they turn it into an inventively technical, brain-twisting affair.

Apexapien is set for release on October 8th by 20 Buck Spin. 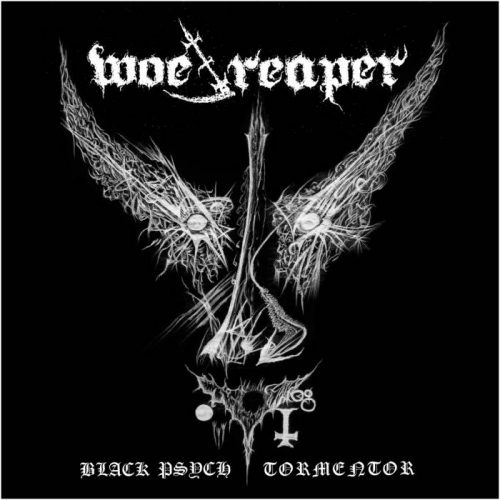 I miss Kaptain Carbon. I should stop missing him and just get off my ass and make contact. Way back in 2012 he wrote something for us here that included this comment about a then-recent Furze album, Psych Minus Space Control:

“Alright dude, stop being fucking weird. I first heard Furze on a treadmill for his 2010 release Reaper Subconscious Guide. Listen, do not ask me why I thought abstract black/doom would be a good tempo for running. Furze is out of his damn mind and takes the idea of black and doom metal and deconstructs it like it is an MFA thesis. Riffs become self-aware and everything turns out to be something Derrida wrote about ages ago. Or not. I never really understood anything I was reading about deconstruction. This is the strangest workout ever. I have always been open to the idea of psychedelic black metal as I feel the pursuit of emotional catharsis and psychological odysseys could form a great partnership. I said nothing about not being weird.”

We’re now in the lead-up to the third Furze album since 2012 (the eighth overall), and Furze is still weird, delightfully so. Woe J. Reaper does what he wants, and while I suspect he enjoys the idea of entertaining other people (or at least fucking with their heads), I also suspect he mainly enjoys entertaining himself. If you wonder where those suspicions come from, check out the next video and song.

“Black Psych Tormentor” is an infectious and increasingly sinister piece of music. The changing drum and bass rhythms aren’t complicated but they create primal drives that get your pulse jumping as Reaper spins out one diabolical guitar hook after another and vents the lyrics in drugged-out snarls and wails. Eventually the pace drags, and the feeling of menace and of ingesting hallucinogenic poison increases.

The new Furze album is also named Black Psych Tormentor, and it’s due for release on October 22nd via Apocalyptic Empire Records. 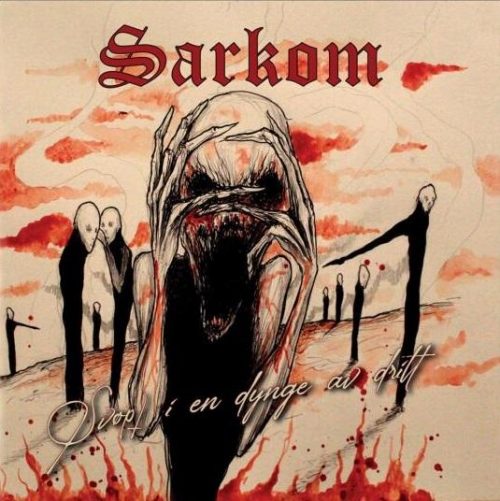 The official video for The Prodigy‘s “Breathe” has roughly 64,250,000 views on YouTube. The video for Sarkom’s cover of the song is probably going to fall short of that, just a narrow miss.

The cover has still got the mighty bass grooves of the original, but the song is 10x more vicious, and only part of the enhanced nastiness comes from Sarkom’s spike-wearing, corpse-painted, blood-drenched, tongue-wagging, pistol-licking appearances. The torrid screams and gruesome growls, coupled with guitars that brutally claw, eerily wail, and psychotically spasm, do the rest of the job.

If “Breathe” is one of your favorite songs ever, odds are you aren’t going to hear it the same way again. You’re welcome.

The cover appears on the 7″ Sarkom single Svøpt i en dynge av dritt, which was released on August 13th by Apocalyptic Empire Records.