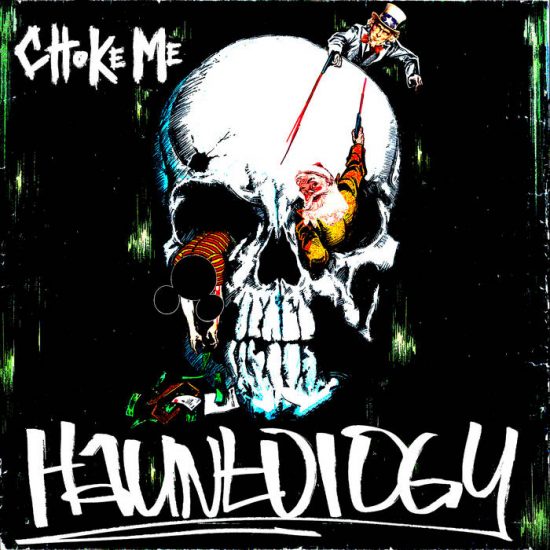 (A Los Angeles band whose 2020 release hit the No. 5 spot on DGR’s year-end list has already returned with a follow-up, and he gives it an enthusiastic review below.)

If you were one of the unfortunate victims to cross paths with my end of the year tome/list – which somehow still managed to happen in the face of 2020 as a whole – then you likely caught my sincerely held belief in the final issue of the list that people had fucked up by letting Choke Me‘s debut release The Cousin Of Death fly under their collective radars.

All joking aside, as a piece of punk-fueled grind, The Cousin of Death was a furious album that wrapped up as shockingly fast as it started. Even were it just a proof-of-concept style release, it showed that there was a lot of potential to whatever spark ignited the Choke Me sound. That is why – even with reservations about the year-over-year churn when it comes to music – it was exciting to learn that the group had issued a follow-up release. We even gave it a brief shout-out in one of our weekend round up posts which archives everything that manages to hit in the back half of the week.

Entitled Hauntology, it consists of six songs and is still very much in line with what worked for the Choke Me crew in their debut. With six new songs – most around two minutes plus – Hauntology only comes in a couple of minutes shorter than its predecessor yet still manages to strike with the same sort of righteousness that blazed through that initial twenty-minute outburst.

Even though Choke Me retain their ‘fastcore’ label with Hauntology, the band extend their song lengths out into the two and three minute range with only one being more in line with the traditional minute-plus surgical attack. The change is an interesting one for the band, because it means songs expand more than they did previously. They’re still as charged as they were before and still delivered with same amount of ferocity but listening to how the  group loop things around within each song makes for part of the fun.

Much of Hauntology plays out like an expansion of ideas that were present on The Cousin of Death, even to the point where “More Than This” feels like the spiritual followup to “Lost Time” from that previous release. Many of the songs on Hauntology follow in a similar vein, moving from one blast-heavy section to another like a righteous steamroller, so that when the album’s shortest song “One Less” opens up with something of a bouncing groove-metal riff for a brief moment it’s almost head-turning.

One of the things that initially grabbed me about The Cousin of Death was how most of the songs started by tearing your head off – also the reason for my initial attraction to Sectioned’s Annihilated a few years back – and Hauntology keeps that trend going. Since most of the songs feel like expansions upon ideas present on The Cousin of Death, Hauntology maintains much of what made its predecessor work so well while still trying a few new ideas as ways to launch the band into the next round of hammering drums and screamed vocals. The two songs that clear three-minutes – “More Than This” and “Sewer Socialism” – show that there’s more to than band than just launching round after round of artillery at the listener. Both remain consistently fast while still dishing out some deliciously grinding riffs to keep things moving. Yeah, you’ll likely recognize the handful of -core riffs that work their way into the mix as well, but if the band choose to move further into that route it could likely work for them. It’s not hard to imagine that part of Choke Me‘s whole philosphy is serving you a sneering middle finger anyway.

Hauntology does exactly what you want a follow-up to an impressive debut release to do. It chooses one of the more common paths by hewing close to its predecessor while still expanding upon some of the ideas initially presented. Yes, a year-over-year churn of music can scare sometimes, because it often works out that the songs on the second release wind up feeling like pale shadows of songs on the preceding disc, or extra ideas that just ‘didn’t quite make the cut’ on the first go-’round. Hauntology dodges that feeling, partially due to the fact that the band’s chosen style is known for quick expulsions of fury anyway and also because the band do some work to make these new songs worthy of their longer run time.

Hauntology is a worthy expansion and follow-up to its predecessor and still leaves Choke Me able to claim their ‘fastcore’ label as their total material now across two releases just manages to clear the half-hour mark.

2 Responses to “CHOKE ME: “HAUNTOLOGY””