My compatriot DGR wrote of Necronautical‘s latest album that it’s one “you’ll be buckling up for as wave after wave of black metal buttressed by a healthy dose of keyboard synth washes over you in an attempt to drag you under the tide”. He also wrote that “it’s also easy to understand how they band would make the title track one of the keystone songs of the disc”:

While the two before it do much of the grunt work of laying out the blueprint for the album’s sound, from the massive, rolling music with symphonics layered over top of it, the choir samples and female singing providing much of the melody, and the sort of criminally underrated guitar lead work that Necronautical have always been dangerously good at, they all fully come together within the song “Slain In The Spirit”…. There tends to be one song that is something of a showstopper in every Necronautical album, the sort of track that you can’t help but get stuck on for a while, and in the new album it’s the title track.

It’s a terrific song indeed, and an easy pick for this list. 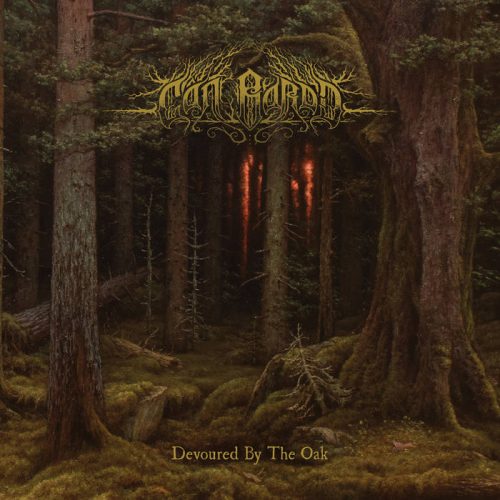 Here’s the surprise I mentioned was coming. Until a few days ago I had never heard this Swiss band’s 2021 album Devoured by the Oak, even though a couple of our readers put it on the year-end lists we received in response to our invitation. I’m pretty sure I had never heard any of their music, period. I paid attention to it at this late date only because I made my first visit to Black Metal Daily a couple of days ago and noticed that one of their writers had named it Album of the Year.

But man, I’m now befuddled about why I didn’t pay attention to this album. I was also so taken with the song “Une Couronne de Branches” that I impetuously felt compelled to add it to this list, even though it never would have made it if I’d ended the list on Monday as originally planned.

It’s yet another very long song, one of surprisingly many that I’ve included this year, but it’s so easy to lose track of time in it. Its grand and grievous symphonic layers make it fit well with others in today’s list-installment; piano, fiddle, and flute instrumentation enhance its old, pagan atmosphere; the convocation of absolutely unhinged bestial snarls and soaring singing work extremely well together. Its softer passages are mesmerizing; its fiery ferocity is electrifying; and its heroic crescendo swells the heart. 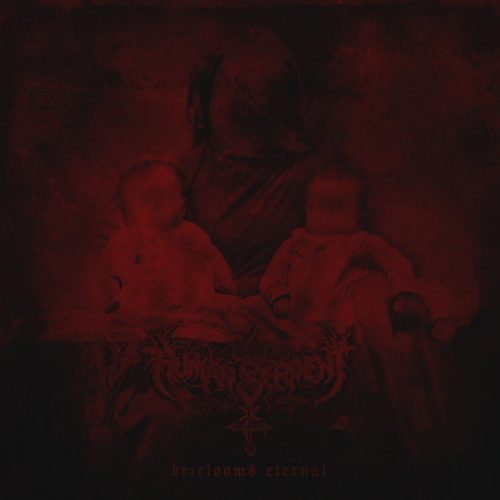 2021 brought us mountains of sadness in different forms, and one sorrowful piece of news was that Human Serpent had decided to disband following the death of one of its three members. Their 2021 album turned out to be their last one. DGR reviewed this one too, and summed it up this way:

Human Serpent have long mastered the art of sounding raw on a black metal release, but with a lethal mind for melodic lines that seem to emerge from the smoke within each song, and Heirlooms Eternal demonstrates just how much the crew have honed in on that art in the three-year gap since For I, The Misanthropist….

Nihilism floods out of Heirlooms Eternal in a fury, but DGR re-emphasized a critical point: [T]he group’s melodic ear means they constantly have their hooks in you and it helps elevate them above so many of these sorts of projects. It’s sheer, scorching hatred with a purpose, but one whose lethality can also be appreciated from a musicality standpoint on top of the ‘holy hell is this abrasive’ introductory stance”.

You’ll vividly understand this point when you hear “Vomiting the Herds“, the track I’ve chosen for this list. Its fury is electrifying; its melodies are memorable. We will miss this band.

Last year Night Crowned followed up their impressive full-length debut Impius Viam with Hädanfärd. The fact that the turn-around time was relatively brief might have induced some trepidation, but the new record turned out to be ferociously good as well.

DGR wrote about this one too, and observed: “It leans much more on the extreme side of things, and save for a few surprising deviations with clean vocal lines, it is the sort of release that never lets up, playing fully into the apocalyptic blastfest one expects from a group veering further into their black-metal inspirations”.

The song we picked for this list is the album’s final song, and I’ll let DGR explain why it’s here (again excerpting from his review):

“Enslingen” closes Hädanfärd, but does so in the most cruel way possible by leaving you wanting more…. “Enslingen” is one of those massive songs that is a great way to send an album out. Although Hädanfärd doesn’t build up to it… “Enslingen” still plays out like the official closing event of the disc. It does the previous few songs in a microcosm, delivering big riffs, huge melodic lines, and plenty of blasting sections that could make a new quarry out of the side of a mountain.

I did foretell that although all the tracks in this collection could be considered melodic black metal, they do not all sound alike. Sol Draconi Septem‘s “The Avatar” makes that point clear.

Our review referred to the sci-fi-inspired album (Hyperion) from whence it came as a “space-prog/black-metal hybrid”: “[T]he ‘black metal’ within Sol Draconi Septem‘s musical arsenal isn’t just a simple weapon but a binding agent for ambitiously joining together a multitude of disparate genres”.

It’s difficult to encapsulate Hyperion in any one fully representative track, but “The Avatar” probably comes as close as one could expect. About that song and the immediately following song “The Hyperion Cantos”, DGR wrote: “If you’re curious just how many tons of howling vocals can be packed into a disc alongside a wall of hammering drums and guitars drowned out by synth and sax then those two songs are perfect”. The song hooked us, and it doesn’t hurt that we love the books that inspired the music. 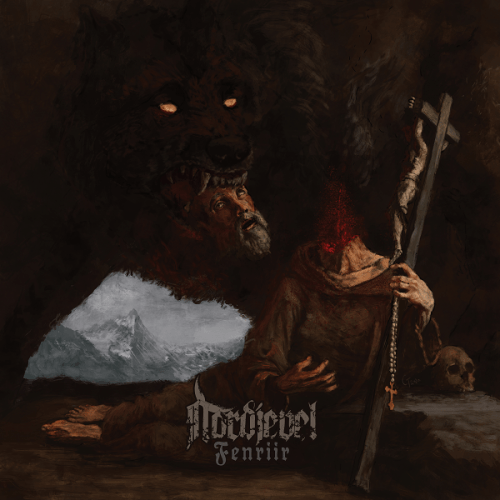 2021 brought us a new EP by these Norwegian violators. Entitled Fenriir, it included two new tracks that the band decided not to include on their upcoming album, while “Gnawing The Bones” was one they said would be included on the next full-length. (The EP also included a live version of “Det Ror Og Ror” and a cover of “Fallen Angel” by Possessed.) In a brief review I wrote:

The power of the riff has not deserted Nordjevel on the three new songs, nor has the jet fuel in drummer Dominator’s veins been replaced by real blood. But while “Fenriir” is searing and head-hooking, it’s also stately and gloom-cloaked. “Gnawing The Bones” is even faster, more feverishly berserk, and more brazenly (and breathlessly) glorious. While “Rovdyr” goes on the attack in frightening, preternatural fashion, it’s also an eerie, stalking beast; Dominator’s drumwork is also wonderfully dynamic.

Although I gave serious consideration to “Fenriir” for this list, the adrenaline factor in “Gnawing the Bones” propelled me in its direction. It’s a contagious song on multiple levels. 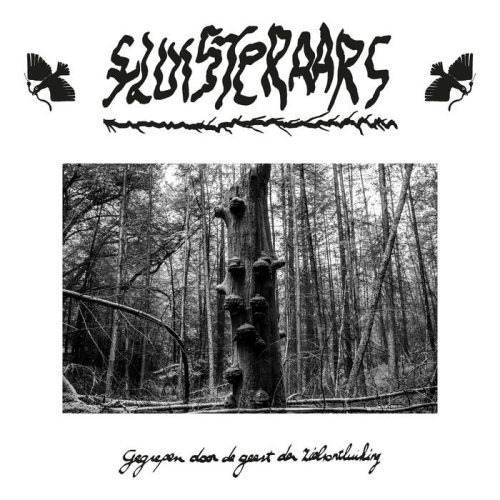 I’ve been on the bandwagon for this Dutch band since hearing their debut album Dromers in 2014, and their subsequent releases have only fortified the conviction that they really are something very special, in part because they explore different interests with each record. Not surprisingly, then, Andy Synn focused on their discography for his 137th Synn Report last August, a report that closed with his review of their 2021 full-length Gegrepen door de geest der zielsontluiking.

From that album I was torn between “Het overvleugelen der meute” and “Brand woedt in mijn graf” for recognition on this list, but I tend to agree with Andy that the latter is “both the strongest and most straightforward track on the album, both electrifying and illuminating in equal measure”. To parrot my own take on the song at NCS when it first surfaced:

Immediately the drums hurtle, a voice scathes the senses with torrid snarls and sky-high yells, and the music soars and scintillates. Those vibrating panoramic sounds are bursting with fiery energy, but a gleaming and enticing tonal spirit wails and beckons through the blazing tumult and then quivers in electrifying fashion above a murmuring bass and pounding tom drums. The glittering, celestial aura of the music is intoxicating, even though the vocals are shattering, but the song ends nightmarishly, in a way that will put your teeth on edge and leave a wet chill on your skin.

Not a song I’ve forgotten, and so here it goes on this list.