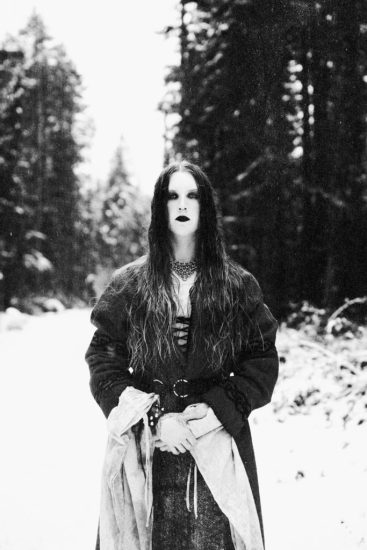 But Hulder‘s solo creator hasn’t been content to just let that wave carry her for as long as it might have. Instead, she has recorded a new EP named The Eternal Fanfare and moved from Iron Bonehead Productions to 20 Buck Spin, which will release it on July 1st. The new EP convincingly shows that Godslastering Hymns… wasn’t a flash in the pan. 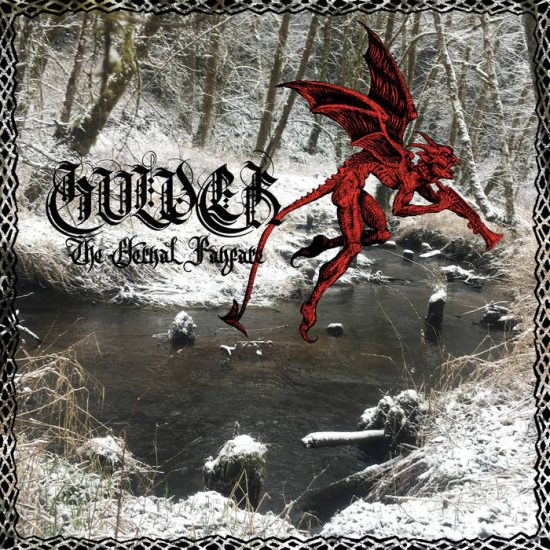 The new EP’s five tracks aren’t clones of each other, but provide a varied trip. The first single, “Sylvan Awakening“, is one that’s a blazing yet bleak experience. Undergirded by a very heavy bass thrust and maniacally hammering drums, and its relentless intensity magnified by the vocal savagery, it roils like a cauldron, but also becomes grim and grieving when the drums ease back on the throttle. 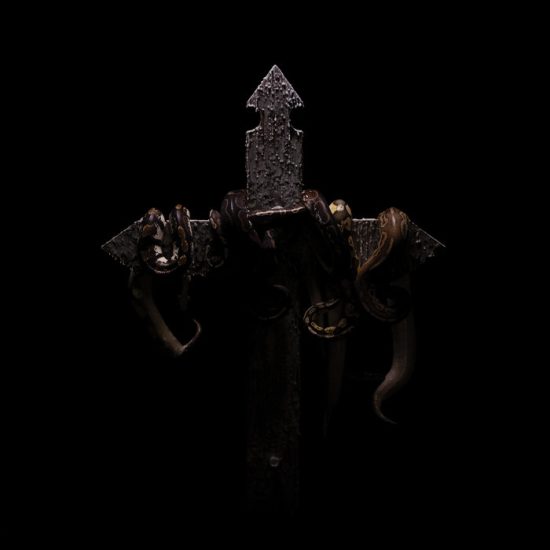 There are now three songs streaming from a new album by Hexis, a Danish band I’ve been enthusiastically writing about at NCS since 2012. They’ve now landed at Debemur Morti Productions, which gives me comfort that I haven’t been crazy all these years. Well, at least not crazy in my enthusiasm for Hexis.

Two of those songs — “Divinitas” and “Nunquam” — are short assaults. The third one, “Exhaurire“, comes close to the eight-minute mark. With its words expelled in raw, scalding yells, “Divinitas” rumbles and tumbles, deluges the senses with dense, vicious guitar gales, and slugs damned hard too. There’s a kind of violent ecstasy channeled by that first song, and it comes through again, albeit leavened with moods of bleakness, in the scything, grinding, and skull-busting cruelty of “Nunquam“.

“Exhaurire” ranges more widely, as you might expect from its length. It delivers bunker-busting power but also quickly creates and then magnifies an atmosphere of oppressive hopelessness, torment, and despair. Having done that, the band then briefly segue into a nightmarish interlude, before continuing to build their looming edifice of terrible calamity, wreathing it with glittering swirls of unearthly melody — which then become dominant near the end, creating vistas of haunting grandeur in which ethereal voices seem to sing.

Let the player run and you’ll hear all three songs. The album is named Aeternum, and DMP has scheduled it for release on August 26th. 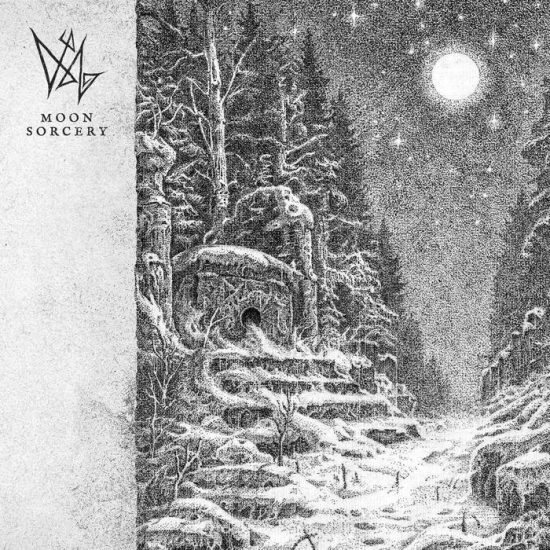 Here’s yet another band whose previous work made me a fan, and thus it was an easy call to check out the new song you can stream below.

The name of the song is “Волшба Луны” (Moon Sorcery). Despite its name, you ought to gulp some air before listening to it, because the bass-work delivers an organ-rupturing beating, the drums relentlessly kick the pulse, and the riffing is a grand, blistering sandstorm of sound. The music also spins and whirls in fearsome and freeing frenzies, topped with imperious, bestial vocal assaults.

This new track was released as a single late last week, but it appears on a forthcoming debut album named Muse of The Damned (Муза проклятых), which will be released by Osmose Productions on June 24th. 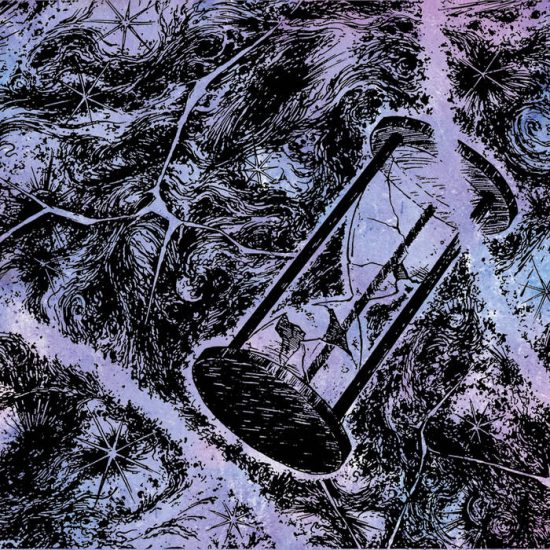 The next two songs, both of which are longer than average, are from the debut album (a concept album) of another Russian band, and this is my first exposure to their music — which turns out to be a fascinating experimental amalgam of modern and traditional ingredients, both within and far outside the realms of black metal.

Like some of the other preceding songs in today’s collection, “Aspiration a l’Absolu” becomes a wild, racing, sky-soaring assault, both frighteningly turbulent and brazenly magnificent. The song is layered with many instrumental accents, including symphonic synths, and includes fiery filaments of melody that swirl within the hurricane-strength storming, a surprising duet of piano and accordion that somehow doesn’t seem out of place, and a vivid violin performance that comes in above a spine-shaking jackhammer-fest. The vocals turn out to be just as tremendously varied as the far-flung pageantry of the music.

“Sleepingstatic” is perhaps less startling than that first song, but only because, by the time you reach it, you’ll have already experienced just how remarkably multi-faceted and surprising the band’s music is. Yet it goes places that “Aspiration a l’Absolu” didn’t go, and includes additional instrumental ingredients (including mesmerizing saxophone solos and burbling bass-like arpeggios to go along with the accordion and other elements that are harder to place). It’s equally worth the time to become immersed in it and swept away by its exhilarating extravagance. (It doesn’t skimp on the neck trauma either.)

The album’s name is Beyond Ratio. It’s coming out on June 17th via Hypnotic Dirge Records. 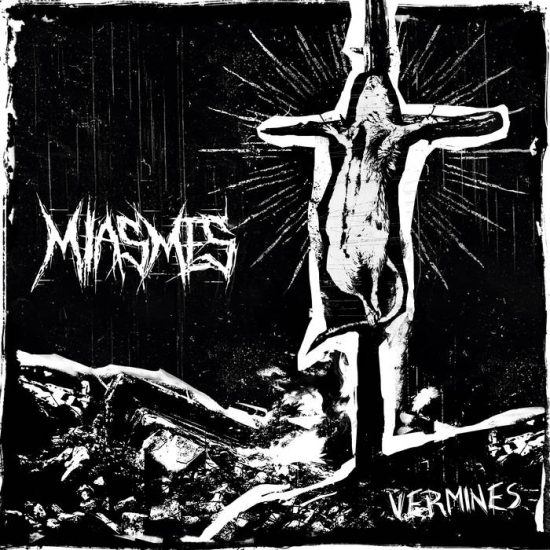 Now we come to the first of the two complete releases I mentioned in the introduction. The first of them is Vermines, a substantial debut EP by the French band Miasmes (the second band in today’s collection who were newcomers to me).

The first song you’ll encounter in the Bandcamp stream is the title track, which comes last in the track list. It provides a vivid first exposure to the band’s feral, swaggering, raucous, yet imperious attack. There’s a raw punk influence in the music, coupled with equally raw screams and variable percussive assaults that will leave you battered and bruised. The combined effect is electrifying.

The riffs in that song also turn out to be infectious, even as menacing and marauding as they are, and the band’s knack for sticking hooks in the songs plays out again and again in the other four tracks. Fire-breathing ferocity and gut-busting belligerence are the main through-lines, but Miasmes do an effective job cycling through a multitude of moods in those other rampages, ranging from bleak to maniacal. The bowel-churning and spine-shaking bass gets plenty of chances to shine and keeps the music heavy as hell, and the vocals are insane at all times. 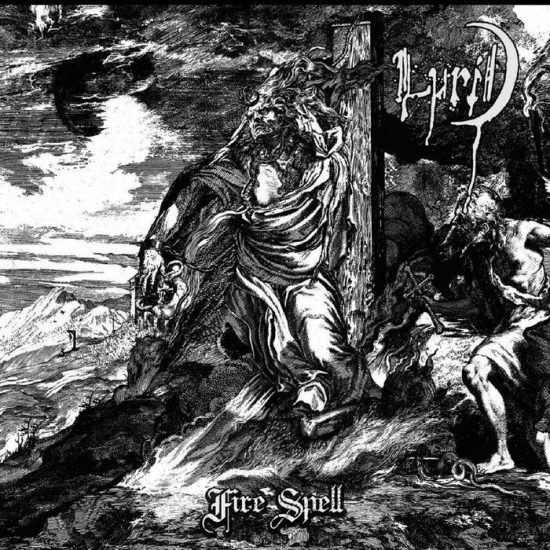 To close, I’m recommending the second complete release included in today’s selections. This one is Fire Spell, the debut album by Chicago-based Lurid. It follows a two-track demo released last year that I had some good things to say about here.

“Fear the Fire Spell” opens this perilous adventure by channeling heartbreak, but becomes an earth-quaking upheaval. The vocals range from abyssal roars to shattering screams; you can feel the bass and the kick drum in your bones; and while the music reaches heights of ferocity, the trilling melodies continue to tug at the heart-strings, creating moods of fear and pain, desperation and desolation.

It’s a stunning way to open the album, and a vivid demonstration of both sonic and emotional power, heavy and explosive enough to level tall buildings, and wrenching in its portrayal of anguish. All those ingredients are hallmarks of the other tracks, though the band also bring in new ones, including classic heavy metal chords, sweeping melodies that immerse the listener in sensations of tragic splendor, and moments of haunting and harrowing loneliness — but the rhythm section never let you forget for very long that you’re in a decimating war zone, even if the bombardments may briefly pause.

The last two songs are re-mastered versions of the two tracks from the demo mentioned above, but well worth experiencing again even if you’re familiar with the first version.

Fire Spell was released by Vendetta Records on June 3rd.