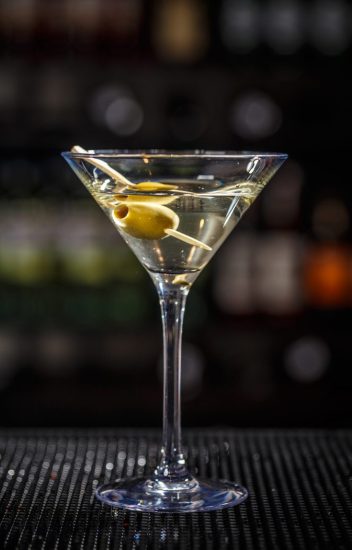 This was supposed to be “Seen And Heard On A Saturday (Part 3)“. Even when I mentioned the idea for it on this past Saturday I knew in my heart of hearts that the odds of getting it done were vanishingly small. Completing two parts was tough enough. At least this time I didn’t toss the idea in a mental dustbin, never to be recovered.

The idea for this one originated last Friday night, with most of it taking shape during a regular Zoom confab among metal writers that I sometimes drop in on when my spouse is out having fun without me. I can’t exactly reconstruct how all these songs popped into my head during that conversation. Free-flowing gin might have had something to do with that, both the surfacing of the songs and my inability to explain how it all happened.

I’m also not sure this assemblage of music is going to connect with anyone else (it begins with some new things but then tunnels far back in time), but fuck it, worth a try. 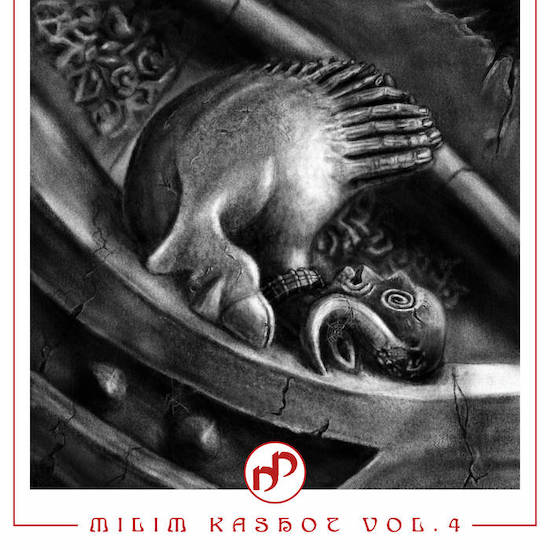 The musical head-trip last Friday night began with a few songs I listened to on my own before venturing into that Zoom confab with fellow metal nerds, so that’s how I’m beginning this collection.

My first choices here are three new demo tracks by the solo project Theophonos, a name you might recognize as the mysterious central figure behind the genuinely mind-blowing Serpent Column before he dissolved that band. These songs are among the 29 tracks assembled on MILIM KASHOT VOL. 4, yet another fantastic compilation by Israel-based Machine Music, and one that I quickly bought and am still making my way through.

How to pithily sum up those three songs? It’s not really possible, without doing them an injustice, but let’s try this: They’re gritty and gouging, clanging and clawing, jolting and convulsive, discordant and dazzling, menacing and mind-warping.

Each one is packed with ideas and startling twists and turns, but ingeniously structured in ways that still get their hooks in your head, whether it’s a result of the battering-ram grooves or the dissonant, fast-changing yet still addictive, riffs and motifs. Like the work of Serpent Column, these are densely layered, with lots of moving parts, and the vocals are insane, but there’s just as much attention given to structure as there is to chaos.

The three songs run back-to-back on the compilation, so if you let the player below continue to run after “Go on to Your Gallows” ends, you’ll be able to hear the other two without lifting a finger. 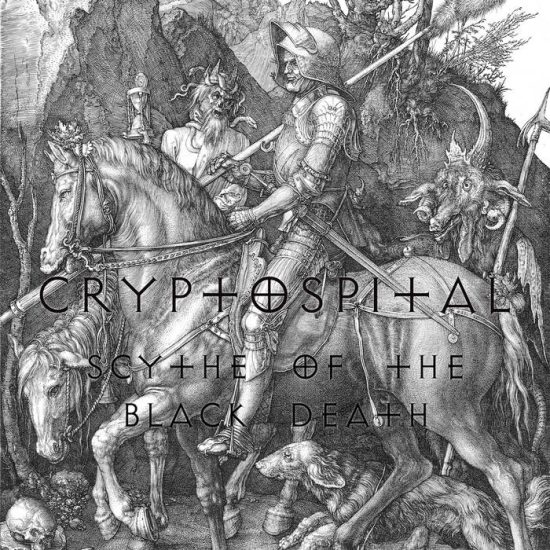 Having heard the foregoing three tracks, with my brain still thoroughly addled, I jumped into the afore-mentioned Zoom chat. Somewhere early on, one of the other writers in the get-together mentioned the next song you’re about to hear from an album (Scythe of the Black Death) that came out in April 2021. He raved about this track, “Death’s Hourglass“, while telling us that although the other songs on the album are mostly solid, none of them rises to this level.

The song has a beautifully languid and seductive opening segment, which makes for a sharp contract to those three Theophonos songs. Over the span of a minute and a half, it creates a wistful spell, but you can begin to hear the approaching frenzy of barbarians at the gates, and then cannons start going off in the music.

With that prelude, the riffing becomes a heavy, dense paroxysm, a voice screams in violent tirades, the drums go full-throttle, and a whirring lead guitar spins into the battlements like a desperate and demented wraith. Sorry to use the overworked word “epic” for this vast hurricane of sound, but that’s what this is, and those swiftly spiraling lead guitar melodies are as glorious as they are bordering on madness.

The song does soften again in a reprise of the opening segment, but immense abrasive chords and punishing drum blows continue to return as well, crushing the life from those fragile sounds. The epic storm swells again, with the fiery wail of those crystalline melodies burning brilliantly bright, until the typhoon of sound spends itself and fades away into an ambient ether.

Are the other songs not as striking as this one? Well, truth be told, I haven’t made my way through the rest of the album. But it’s hard now to resist the determination to proceed when time allows. 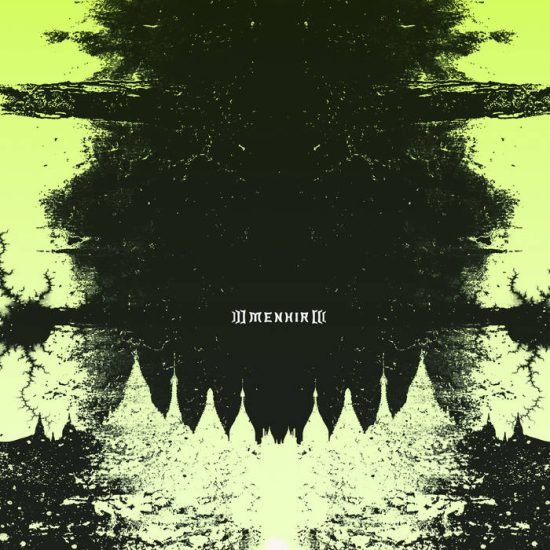 Last Friday was the birthday of two Swedish brothers whom I’m proud to call friends. Both of them have been members of various metal bands. One of them was involved in the Zoom get-together. The other was not, but it was the music of the absent brother’s band that popped into my head.

Well, not just for “some reason”, but because the next song has hung around my head for a solid 12 years since I first heard it. Just glimpsing the cover art in a collage of things listened-to in the previous week by the present brother brought it straight back.

Twelve years… yes indeed it’s been that long since Canopy released their album Menhir. Listening to parts of it again over the weekend solidify my conviction that it’s one of those albums that’s ageless. It still sounds very good, rather than something that was a creature of its time and now seems dated. And although it’s a tough call, I think the title track is the best of a very strong bunch.

I put “Menhir” on our list of 2010’s Most Infectious Extreme Metal Songs, and time has proved what an astute choice that was. Mario Santos Ramos (frontman of Feared), who contributed vocal arrangements to a different track on the album, wrote of this one: “This song is the perfect start to a stellar album. It has everything. The build up and power this song evokes is nothing short of genius”. 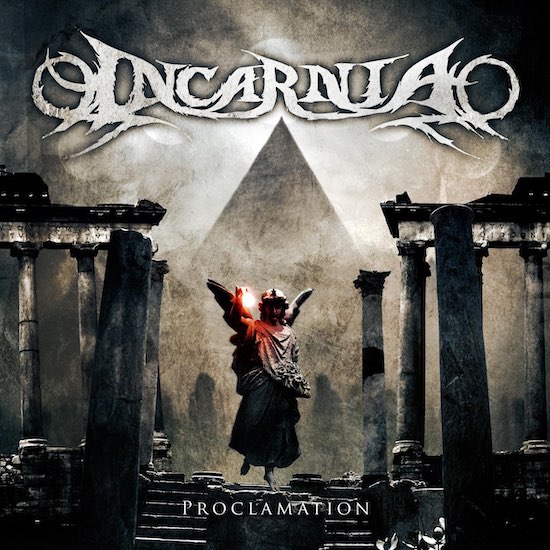 By this point in the Zoom conversation my brain was still unearthing songs from memory, but the leap from one to the next is getting harder for me to explain. My best guess about why I jumped into Incarnia‘s “Yersinia Pestis” is that I discovered it in the same month (August 2010) when I discovered “Menhir” — and because it has also remained stuck in my head for a dozen years.

I actually associate this song with another fantastic and highly addictive Canopy track off of Menhir, “The Entire City“, even more so than the album’s title song, but it again is more a coincidence of timing rather than a true musical resemblance. Regardless, 12 years ago I got so excited about “Yersinia Pestis” and the rest of Incarnia‘s debut album Proclamation that I launched a sweepstakes in which I offered to buy CDs of Proclamation for anyone and everyone who could fill in missing words from the lyrics of “Yersinia Pestis” (at that time the lyrics weren’t published and I wasn’t able to completely decipher the words from listening repeatedly).

I still think this is a fantastic song, and Proclamation as a whole (reviewed here) was so promising that it was both perplexing and saddening to understand that this Montréal band split up after releasing the album. And as far as Metal-Archive discloses, none of the band’s six members have been involved with any other metal bands on any other releases since then. 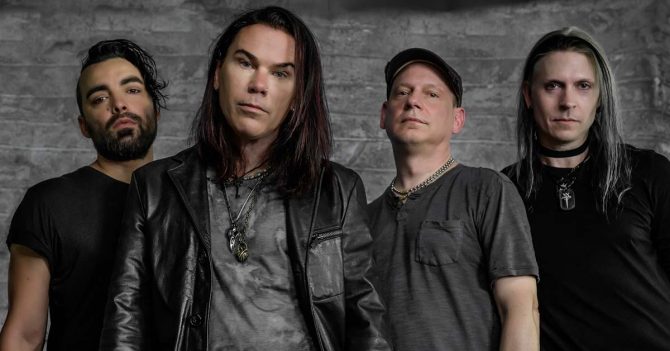 OK, now I’ve completely lost any idea about how my mind jumped from Incarnia to Stabbing Westward last Friday night, but it did. Like the last two songs in this collection, “Save Yourself” has never left my head, and it’s been there for an even longer stretch of years. It appeared on the band’s 1998 album, Darkest Days, and that’s when I first heard it.

Man, I wore that song out in 1998, feeding off of it for months and months, and going back to it off and on for years. I thought by now it would be more of a nostalgia trip than anything else, but when I watched the video for it (which is a hell of a video) last Friday, it fired me up all over again. The song is still really catchy, and the intensity of Christopher Hall’s vocals (and the lyrics) still raise goosebumps. Or at least they do for me.

Having gone this far down a musical rabbit hole on Friday, I kept spinning down it after my spouse came home and I left the Zoom chat, but it’s probably best for me to call a halt to this round-up now. Other chores are calling, and I may have exhausted your patience anyway, but I do hope you found something here that caught your interest, or provided a good memory.