If you’ve been a regular reader of NCS since August, then you’ll know there was no way we would finish this list of “most infectious” songs without including today’s two additions to the list. It seemed like the whole month of August at NCS was devoted to these two bands — and with good reason: The music just grabbed us by the throat, the back of the neck, and other body parts that will go unmentioned, and wouldn’t let go.

Neither band has yet achieved the level of global visibility captured by most of the other bands whose songs are on this list, but that’s simply a sign of how much good metal is being created that, for one reason or another, hasn’t yet made the kind of big cannonball splash that the music deserves. We count ourselves lucky that we found these bands. We hope we’ve done our picayune part to expand their audience. Selfishly, we hope they continue to create the kind of music we’re featuring here today.

If you happen to be tuning into this series for the first time and wonder what we mean by “most infectious”, read this. To see the 18 songs we named to the list before today, click the Category link over on the right called MOST INFECTIOUS SONGS-2010. And to read more about the next two songs — and hear them, if you haven’t already — follow us after the jump for todays’s songs from Canopy and Incarnia. 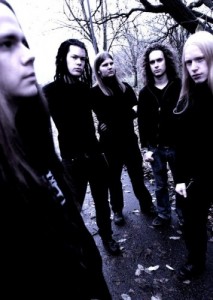 In the middle of August we stumbled across a song called “Decipher” by this Swedish band from their 2009 album, Will and Perception, and were mighty impressed. With some help and encouragement from regular NCS commenter and occasional contributor ElvisShotJFK, we explored further and found a lot more to like — including the band’s 2010 release, Menhir — which had just become available. (The whole story about how these discoveries occurred is here.)

In our subsequent review of Menhir, we went on at excruciating length about the title track.  (Actually, as a reflection of our enthusiasm over the whole album, the whole fucking review was excruciatingly long). Coming back to the song again for purposes of this post vividly reminded us how much we liked it — it’s not only one of the year’s most infectious songs, it’s also one of the best, period.

“Menhir” has a lengthy instrumental build-up — about 3 minutes of beautiful, somber melody, slowly escalating to the eruption of immediately infectious riffing and deep, dark, howling vocals. And the song just gets better and better as it moves along, all the way to the groaning bass injections near the end. Like all the songs on the album, it features an inventive combination of rapid-fire, intricate picking and technically attention-grabbing solos, dissonant hammering rhythms and catchy melodies — and awesome vocals. In a nutshell, it’s a beautiful example of melodic death metal done right.

You can stream the entirety of Menhir at Canopy’s Bandcamp page, and buy a digital copy of the album there for a reasonable price. Or you can order a digipack here. 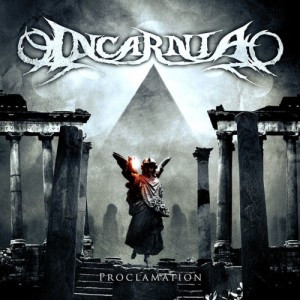 Montreal’s Incarnia was another band that grabbed our attention in August and wouldn’t let go. In our review of Incarnia’s 2010 album, we wrote: “For a young band’s debut release, Proclamation is a remarkably assured, remarkably sophisticated offering of melody-drenched melodeath that also triggers the headbang reflex quite nicely. The more we’ve listened, the more massively hooked we’ve become . . . . These 7 songs beckon you to return again and again. Their melodies catch in your head, and their movement from the bestial to the sublime resonate: They feed that yearning some of us sometimes have for both aggressive extremity and memorable melody.”

We got obsessed over one song in particular — so much so that we ran a contest, offering copies of Proclamation to anyone who could help us correctly decipher the song’s lyrics. The song is called “Yersinia Pestis”, which is the scientific name of the bacterium that causes the black plague. In addition to being a great song, the lyrics (which are pretty intelligible in the vocals) are awesome.  You can see the correct lyrics in our post announcing the contest winners (here), and it might help to know that Incarnia’s bassist, Todd Douglas, is studying microbiology and immunology at university, which may explain the subject matter and title of this song.

As we said in our original review, “Yersinia Pestis” isn’t the best example on Proclamation of what Incarnia is capable of doing (“Carrion” is probably the album’s best offering), but it’s damned infectious. With a name like that, it should be, shouldn’t it?

If you missed all the hub-bub in August, check out the song now, which we’re proud to add to our list of the year’s most infectious: