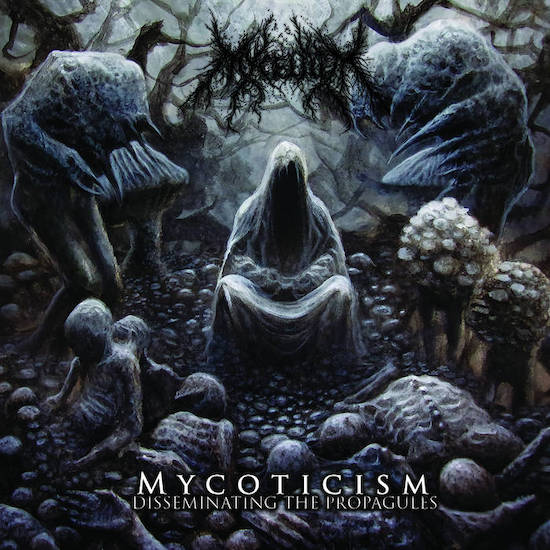 The first time we heard the music of Mycelium, 17 months ago, we were inspired to introduce the music this way:

The cleverly titled album, Scream Bloody Spore, is out at the end of June on Coyote Records and is described as ‘a raging journey through a hidden world of decay, parasites and deadly toxic organisms’ — which pretty much sums up the global death metal scene, don’t you think?

So yes, we had some fun with Mycelium‘s thematic focus and clever word-play, but the music on that debut album was damned good too. Mycelium‘s alter ego Greg Edwards must have had some fun making it too, because he’s already back with another Mycelium album, which is due for release on November 25th via Blood Harvest Records. The name of this sophomore full-length is Mycoticism (Disseminating the Propagules). What, you may ask, is a “propagule”? 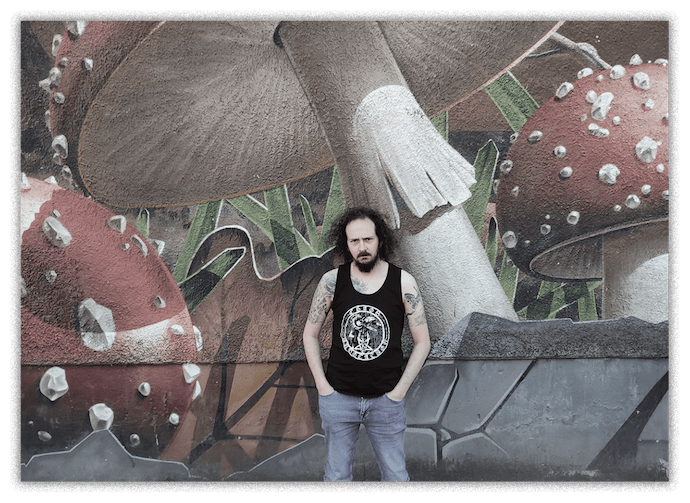 The Font of All Human Knowledge tells us this:

“In biology, a propagule is any material that functions in propagating an organism to the next stage in its life cycle, such as by dispersal. The propagule is usually distinct in form from the parent organism. Propagules are produced by organisms such as plants (in the form of seeds or spores), fungi (in the form of spores), and bacteria (for example endospores or microbial cysts).”

And because we live in a pandemic age, this is also worth quoting:

“In disease biology, pathogens are said to generate infectious propagules, the units that transmit a disease. These can refer to bacteria, viruses, fungi, or protists, and can be contained within host material. For instance, for influenza, the infectious propagules are carried in droplets of host saliva or mucus that are expelled during coughing or sneezing.”

In the case of Mycelium‘s album title, both of these statements appear relevant. It’s likely that the new album’s title refers to the dissemination of spores by fungi, but even more specifically, to the propagation of fungal disease — because mycotic diseases are those which infect humans from fungal sources. (Did you know that in the U.S. the government Centers for Disease Control and Prevention includes a Mycotic Diseases Branch?)

Which brings us to the name of the song we’re premiering today, “Rosecomb Marauder“.

Stupidly, we didn’t ask for specific information about this track but again did our own investigation, and first learned that the Rosecomb is an old bantam breed of chicken that’s been popular as an ornamental breed since at least the 14th century, one kept for competitive poultry showing because of its striking appearance (yes, there is such a thing).

But wait, surely Mycelium didn’t write a song about ornamental roosters! Digging a bit deeper revealed the song’s more probable theme. As discussed in this source, mushrooms can become subject to a disorder that produces “distortions, lumps and gross malformations” in the mushroom. “Often gills are present on the top leading to the name rosecomb“. It’s a phemomenon that’s actually kind of nasty to imagine, and to look at.

The song is nasty too, but it’s an ingenious and technically impressive kind of death metal nastiness. On the one hand, it throws at your eardrums a dense mass of abrasive roiling riffage and gargantuan growling madness. But there’s also a creepy quivering and wailing sensation that emerges within that frenzied mass of sound — the song sounds authentically ill as well as crazed. And the manically jittering guitar spasms that erupt within the music create a feeling of uncontained, remorseless viciousness.

Meanwhile, the drumming is a brutalizing experience all its own, though the patterns change rapidly, contributing to the feeling of being caught in the midst of an electrifying vortex of infection, or perhaps a furnace of consumption.

What else lies in wait within the album? Let’s turn to Mr. Edward‘s own commentary:

“The new album is a continuation thematically from Scream Bloody Spore, taking you on a new journey through the mycological undergrowth. Mycoticism examines deadly fungi such as amanita phalloides (the ‘death cap’) and inosperma erubescens (the ‘deadly fibrecap’), coprophilic fungi, parasites, fungi that eat away the fabric of buildings, and not to mention toxic fungi which will leave you shitting and puking like there’s no tomorrow”.

Blood Harvest will release Mycoticism (Disseminating the Propagules) on CD, vinyl LP, and cassette tape formats. The CD and tape versions will be released on November 25th while the vinyl version will follow next year.

You can check out the options via the links below, and you can also check out the album’s opening track, “(Intro: Mazegill of Torment) – Emerging from Rotting Faeces“. We’ll let you do your own research about the title of that one, though Mr. Edward‘s quotation provides a clue.

P.S. The fantastic cover art was created by Jon Zig.