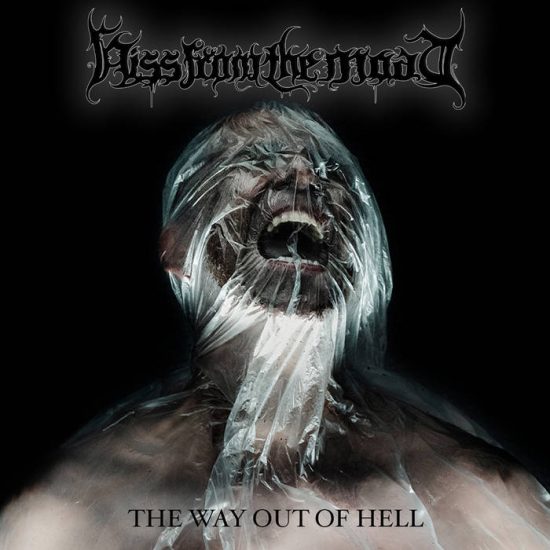 (Distortion Music Group released a new album by the Italian marauders Hiss from the Moat in late October, and DGR now gives it an extensive review.)

The Hiss From The Moat story as it has developed over the years is an interesting one. The group started out straddling the line of -core and full-blown brutal death metal, before leaning heavily on the brutal death metal side on their debut album Misanthropy. On top of that, it was a disc that was also pretty indulgent in its own subject matter, packing a tremendous amount of skull-shattering into a little over a half hour]s worth of music.

It seemed for a bit that Hiss From The Moat were more than happy to hop into the wave of drum-kit destruction that was hailing from Italy during the mid-2010s, and drummer James Payne especially proved to be a machine when it came to answering the call. Layering over-top a heap of Satan and general anti-christianity and you’ve got the general recipe for Hiss From The Moat at the time.

In the almost ten years hence, the group has changed a little bit, becoming a tighter-knit and more compact-sounding group. Misanthropy was a humongous sounding album that was written to overwhelm, but follower The Harrier was more purpose-driven. It was quicker moving, and a light dash of quick-moving guitar work had found its way into the band’s overall collective. Somehow, The Harrier was a grander sounding album – heavy on the war-drum hits to punctuate movements within songs – a longer album and one that was a little more blackened than its skull-crushing predecessor. It had peaks and valleys, which helped to somehow make a thirteen-minute longer album seem somehow shorter than its older sibling. We wrote about it here.

The group’s newest release The Way Out Of Hell hit in late October and yanks the baton out of The Harrier‘s hand.

The group’s lineup has remained largely the same in between releases – though drummer James Payne has found himself behind the kit for Kataklysm currently –  and it seems that with The Way Out Of Hell Hiss From The Moat felt it was time to start trimming around the edges. Playing the numbers game between the current incarnation of the group’s releases, The Harrier weighe in at just a little under forty-four minutes of time… and The Way Out Hell? About thirty-nine and a half minutes.

What has changed then? Well, The Way Out Of Hell is only nine songs vs The Harrier‘s eleven, and it becomes immediate that the first thing which got left by the wayside between the two releases: about four minutes of instrumental scene-setting music. That’s right, this time around The Way Out Of Hell has done away with that, instead launching into its assault from the very beginning. There’s no scene-setting, no slow roll into the album, you just launch right into it from the first press of the play button.

Which says a lot about The Way Out Of Hell as a whole. It is an album that starts at one hundred miles an hour and effectively stays there for its entire run time. Peaks, valleys, dynamics and the like are left behind. The Way Out Of Hell is meant to be nice songs of ‘attack’ for the next forty-minutes, with the only real breathing-point coming when the group shifts into chugging guitar riffs and percussive movements instead of the unrelenting blastbeat assault that has long been a defining feature of the band.

The opening assault is pretty descriptive of how little the band will cease moving throughout those thirty-nine minutes. The opening four songs whip past like a blur, just one claws-out attack via-battlecat after another. “The Way Out Of Hell”, “I Am The Deceived” and “Staring At The Abyss” are a triplet of tracks that are like snapping necks done in a sequence. If you thought we were joking about how it seems like The Way Out Of Hell picks up the relay from The Harrier with little effort despite a three-year gap, those three songs will lay to rest any sense that Hiss From The Moat have made massive changes to their sound.

The real dynamic shift within the album happens at its midpoint with “Generation of Cowardice” and “The Killing Of Innocence”, where Hiss From The Moat are more than happy to show off that chugging guitar and -core influence that have long been part of the group’s brutal death lineage. “The Killing Of Innocence” is basically one rock-stupid chug after another – as if possessed by Hour Of Penance‘s own tendencies to just lay a big boulder destroyer of a song in the middle of the blast wall – that arrives after one big spiral into death metal in “Generation Of Cowardice”.

Hiss From The Moat‘s songwriting knows where its bread is buttered in a lot of ways. The band are very aware that they should give their drummer any chance to annihilate his kit as often as they can. If you have a weapon like that then why not use it? Sometimes it can feel like Hiss From The Moat songs are written just so the drums can get the dirt can get beat out of it with massive rhythm sections like the ones that take place in the song “A Gallows Of Mirrors” – which is well within the part of the album where the band have long since settled back into the rapid-fire guitar and drum attack that you’d expect from this sort of hyper-fast death metal group. It’s a tightly controlled chaos-and-brutality mix; when the song shifts into the album’s final song “The Magnificent Vision” it just seems like a quick vocal break and then right back into the next musical tornado to mow down a row of houses.

If you’re a music fan who likes their music unrelentingly fast, then this is an album that should be right in your wheelhouse. Really, it’s the two songs highlighted in the middle where it seems like Hiss From The Moat slow down a bit. The rest of the album is the band knives-out and ready to commit violence.

The Way Out Of Hell is a ride of an album to think about, because it seems like the overall course of action for the band was just to trim the edges off its predecessor and try to compact things even tighter than before. There’s a lot less hammering war drums within the record’s confines, and instead Hiss From The Moat focus on the fire-from-the-heavens approach of songwriting. You’ll often note how hard the band lean on quickly-picked guitar riffing to reinforce their overall wall of sound, letting much of the lead work remain well within the ‘blackened’ sphere of metal, yet everything behind it is just a rhythm section ready for a fight.

The Way Out Of Hell is like a companion piece to The Harrier before it, with the band’s earlier releases seeming more like outliers as they tried to find their way within the world of heavy metal. This album is what the band are good at; which is non-stop high-speed hammering from beginning to end. It’s ultra-precise and about as gloriously death metal ‘dumb’ as you’d imagine. It has a singular focus on high-speed brutality, and if you’re a fan of that then The Way Out Of Hell makes for a good addition to the music collection.