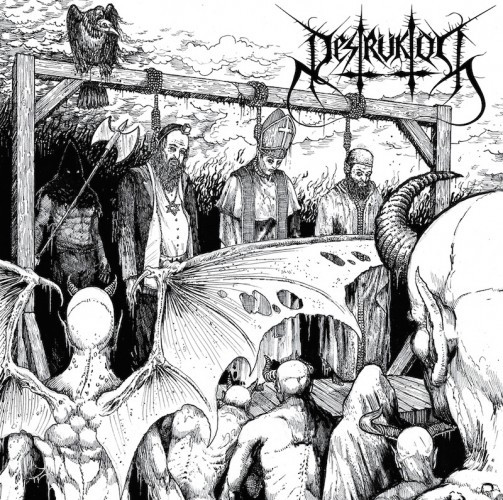 Today is the day, the day when Hells Headbangers opens the cage door and allows Destruktor’s new album Opprobrium to run rampant across the world. It’s the band’s first full-length since Nailed emerged in 2009, and it’s one hell of an album.

The first minute and a half of “Priestiality” might seem at first blush to function as a statement of intent, its slow, dismal chords and funereal drum rhythm casting an aura of gloom right from the start. But slow and dismal isn’t really what Opprobrium is about. It’s about ripping big bleeding holes in your body while giving your head the kind of enthusiastic whipping it deserves.

With the exception of a few astutely placed breaks in the onslaught, Destruktor deliver one furious, fast-paced blast of energy after another, mixing together elements of black metal, thrash, and death metal into music that’s vicious but tremendously infectious (in both senses of the word). END_OF_DOCUMENT_TOKEN_TO_BE_REPLACED

This morning Patrick unveiled his remix of the title track to Napalm Death’s 2005 album The Code Is Red… Long Live the Code. The original song is fucking outstanding — but Patrick has made it five times more amazing, converting it into a 15-minute non-stop circle pit. END_OF_DOCUMENT_TOKEN_TO_BE_REPLACED