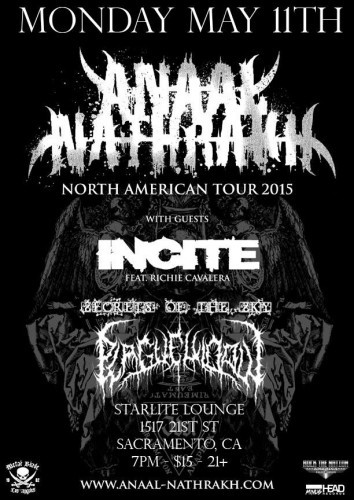 I’ve often joked about my living in Sacramento as being an unfortunate situation and something of a curse. Sacramento, which could easily be described as a pretend big city and the world’s largest cow town, often within the same breath, is a city that up until the past three years or so would rarely get many touring acts rolling through town. Most of the time, those tours would hit the big cities (you know, the ones they actually care enough to include on a map of California because stuff happens there, unlike us, who get preferential treatment because we are the capitol) and then quickly jet away from the desolate wastelands of this state.

The local scene has always been vibrant but even now, with a whole bunch of venues in town and multiple concerts that likely would have NEVER rolled through before those venues came to Sacramento, I still find myself surprised. Sometimes, the stars align and we even manage to pull off something incredibly insane — like Anaal Nathrakh coming to podunk-ass Sacramento and playing in a venue the size of a large kitchen. END_OF_DOCUMENT_TOKEN_TO_BE_REPLACED

I’ve written about these guys from Germany before; in fact it was on my best of 2012 list here on NCS. What probably separates them from the old guard is their knack for using grooves that are more reminiscent of modern metal. One could say that they’ve got one foot each in the past and the present. This German trio’s got a new LP out titled Kingdom of Worms via FDA Rekotz. Stream their first single below. END_OF_DOCUMENT_TOKEN_TO_BE_REPLACED