You might think that having posted 23 very recent song and video premieres over the weekend (here and here), I’d be fresh out of new material to toss your way. But you would be wrong.  Here are four more that surfaced over the last 48 hours that I’ve been enjoying, and the music is so varied — including two exceptions to our Rule — that I’m betting you’ll find something to like as well.

As I previously reported, on May 27 in NorthAm (and May 23 in Euope) Season of Mist plans to release a special 2-disc compilation entitled One And All, Together, For Home. The project was initiated by Drudkh’s  Roman Sayenko and it will consist of 17 songs by eight excellent bands performing traditional song interpretations from their native countries, cover versions of folk songs, or the use of themes and melodies from their musical heritages in original compositions. All of the songs will appear exclusively on this release.

I’ve already streamed the track by Primodial (here) and today I bring you the song contributed by Norway’s Kampfar.

The song is called “En Hymne Til Urd” (A Hymn for Earth)”. Here’s the band’s explanation about the song: END_OF_DOCUMENT_TOKEN_TO_BE_REPLACED 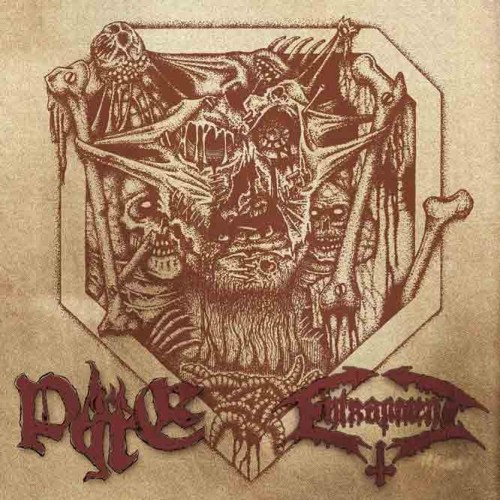 Last month the Dutch label/distro Soulseller Records released a 45 rpm black vinyl split featuring two songs each from Pyre (Russia) and Entrapment (The Netherlands). I don’t have the vinyl — yet — but I did discover all four of the songs on Bandcamp, and what a discovery that proved to be. I admit that I have a real weak spot for the style of metal both bands play; more accurately, it’s a G-spot (or at least the male equivalent thereof). But even making allowances for my predisposition toward this kind of music, what both bands have done here is impressive.

The genre to which I’m referring is old school, Swedish-style, metal of fucking death. I hasten to add that Pyre and Entrapment do not sound like clones of each other. Although both bands have obviously plunged their hands up to the elbows in the river of gore that spread out from late-80’s/early 90’s Stockholm, they have very distinctive takes on the tradition, and there are some nods to Autopsy and NYDM in the music, too.

Pyre are based in St. Petersburg, and this is only their second release (the first was a 2012 EP, Ravenous Decease), but man, they already sound like they’ve been at this for a long time. “Destined To Die” is a hard-rocking, punk-fueled rampage that gets the neck snapping immediately. The guitars and bass are stuffed full of HM-2 distortion, the gut-punch drumming is pitch-perfect for this kind of music, and the vocalist sounds a helluva lot like LG Petrov. Very nice screaming guitar solo in this one, too. END_OF_DOCUMENT_TOKEN_TO_BE_REPLACED