Here are a trio of discoveries I made last night and early this morning that I believe will be worth your time.

The next album by Britain’s Winterfylleth, The Divination of Antiquity, will be coming our way via Candlelight on October 7 (October 6 in the UK). I’ve been very eager to hear the new music. The first single from the album, “Whisper of the Elements”, was released on August 5, and this morning a lyric video for the song got its premiere.

The music is beautiful, intensely melodic and atmospheric, more so than anything the band have done before, and the nature-cenric lyrics well suit the dramatic emotional power of the sounds. Listen next… END_OF_DOCUMENT_TOKEN_TO_BE_REPLACED 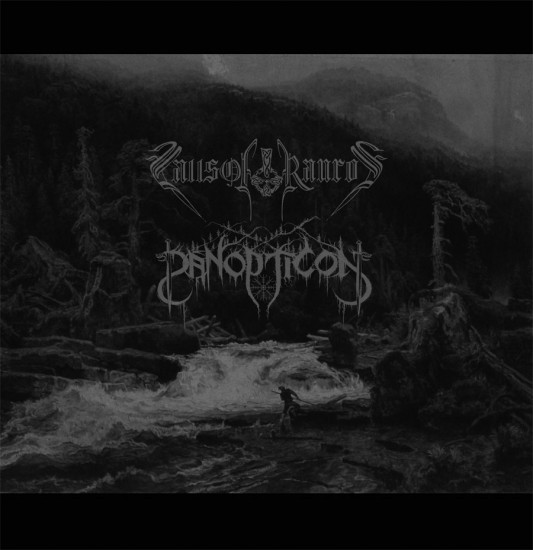 I first learned that Falls of Rauros and Panopticon would be joining forces for a split release back in December 2013, when Panopticon’s Austin Lunn accepted our invitation to write an article about his favorite releases from 2013. It’s a natural pairing. There is, for example, a deep mutual respect between the two bands. Austin Lunn wrote in that same article that Falls of Rauros are his “favorite current American band” and that their forthcoming 2014 full-length (Believe In No Coming Shore) “may be my favorite record ever”, and Falls of Rauros have called Panopticon’s forthcoming album “absolutely massive and stunning on all levels”.

Beyond the respect they have for each other, both bands have earned the respect of both critics and a dedicated following of fans: they are both quintessential American black metal bands, and not just because they happen to be based in Maine and (at least temporarily) Minnesota, respectively. They have successfully incorporated American folk traditions into their powerful and emotionally resonant music, so much so that you could call them American folk metal bands instead of black metal bands and I wouldn’t argue with you.

Yet you may be surprised by what you hear on the new split, as compared the sounds captured on each of the bands’ last albums and on the albums to come. Panopticon’s tracks are unquestionably an homage to Norwegian black metal traditions, while Falls of Rauros have, if anything, brought even more vibrant life and light into their songs. You’ll get a chance to hear both styles of music on display as we premiere one song by each band from this excellent split. END_OF_DOCUMENT_TOKEN_TO_BE_REPLACED

Among the names on my mental list of highly anticipated 2014 releases, Falls of Rauros and Panopticon were in the upper reaches. This spring, Bindrune Recordings will be releasing a 12″ split by the two bands. Falls of Rauros contributed two songs — “Unavailing” (at nearly 12 minutes in length) and “The Purity of Isolation” (nearly 7 minutes).  Panopticon contributed four songs, totaling nearly 25 minutes. Having heard the split, I can say that it has more than met my very high expectations.

I had hoped to scribble a review by now, even recognizing that I wouldn’t be able to do it justice. But alas, I’m way behind. What I do have, with thanks to DECIBEL magazine, are two of the songs from the split, one from each band. Since I still harbor a feeble hope of writing my own thoughts about the music later, I’ll not say more about the songs now — but simply provide the streams for your listening pleasure. END_OF_DOCUMENT_TOKEN_TO_BE_REPLACED

2014 has barely begun and it has already delivered a slew of mouthwatering new releases. But few have caused your humble editor to salivate in anticipation quite like the forthcoming 12″ split by Maine’s Falls of Rauros and Kentucky’s Panopticon. Finally, it is has been sent to the pressing plant and is now ready for pre-order. I am here (having wiped the slobber from my face) to deliver many enticing details that were just disclosed this morning — including a nearly 17-minute trailer of music.

Detail No. 1:  That fantastic cover art you see above. Click the image to view a larger version.

Detail No. 3:  Bindrune Recordings, which is releasing the split, describes the Panopticon music (in part) as follows: “The mountains, landscapes, and memories of living and studying in Norway have crept into Austin/Panopticon’s ever evolving and vital sound to embody more of a stripped down and dark Norwegian BM influenced atmosphere for this release which harkens back to Panopticon’s more aggressive and raw S/T album…. The 4 songs on this split embrace the pure essence and influence of the 90′s Norwegian black metal movement in all of its driving, chilling and endlessly atmospheric grimness.” END_OF_DOCUMENT_TOKEN_TO_BE_REPLACED