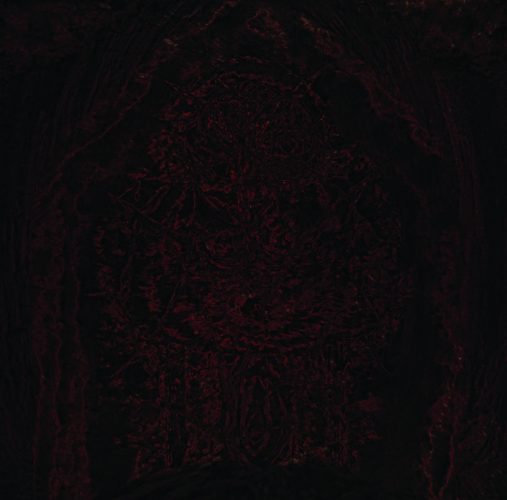 (Norway-based writer Karina Noctum, who usually brings us interviews, brings us another enthusiastic review, this time focusing on the 2017 album by Australia’s Impetuous Ritual.)

Even though it is coming out a bit late (sorry for this), I decided to write this review anyway. But before I attempt to describe this beauty of an album, I would like to tell you that Impetuous Ritual have nothing to do with Portal. If you thought they did, they deny this, even though it seems that pretty much everyone says so. Their mystical Roman-numeraled personas are to remain unknown, and that’s fine. Now we have lots of musicians called I, II, III, IV, and so on in BM. Someone should start using binary codes just to make a difference.

Back to the music. I think this is absolutely one of the best albums this year. It is very Australian! I adore the sound. True madness, darkness, and old-school feeling. The band show their cumulative experience in a piece that may seem raw, but is technical and well-produced. The album shows that it is absolutely possible to combine those qualities. This is the kind of album that leaves others with no excuses. Bad production and poor musical skills are by no means what makes something raw. END_OF_DOCUMENT_TOKEN_TO_BE_REPLACED

I might be able to do the same thing tomorrow, but probably not more than that. Hope you find some things to like in the following eclectic collection. END_OF_DOCUMENT_TOKEN_TO_BE_REPLACED 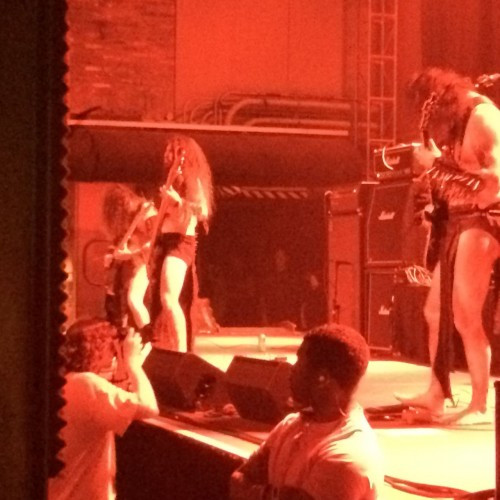 My friends and I shambled out of the Edison Lot along with hundreds of other people and found cabs that would take us to Ram’s Head (which was not difficult). Yes, we could have walked, but after three-and-a-half long days and nights of standing on hard surfaces, my feet had swollen up like rotten fruit — plus, every minute lost was one less minute of music to hear on the final night of MDF. When we arrived at Ram’s Head, that photo up there shows you what greeted my eyes. END_OF_DOCUMENT_TOKEN_TO_BE_REPLACED

I’m working on my alliteration skills this week. I have my fun where I can find it. Speaking of fun, I have three new songs and one new video to share. If you think there might be no connection between the music and my alliterative word play, think again…

Earlier this month I reported about that dark piece of artwork embedded above. It’s the cover for Unholy Congregation Of Hypocritical Ambivalence, which is the name of an album by Australia’s Impetuous Ritual that’s due for release by Profound Lore on April 15. The band’s first album, Relentless Execution Of Ceremonial Excrescence, was released back in 2009. Their ranks include members of Portal and Grave Upheaval.

Yesterday an advance track was released for streaming. It’s a good thing “Venality In Worship” is only three and a half minutes long, because otherwise the structural integrity of the planet might be threatened. It’s a thoroughly obliterating blast of blackened death metal, roaring with massive, grinding guitars, militaristic percussion, and bestial vocal vituperation. The piercing guitar solos are utterly demented, too. END_OF_DOCUMENT_TOKEN_TO_BE_REPLACED

I mentioned in my last post that I didn’t spend much time with new music debuts over the last day or two. I’ve learned the hard way that if I snooze for even 24 hours, I miss a lot of worthwhile stuff. And so I’m hoping to get a couple of round-up posts written for today, because I found a metric fuck ton of worthwhile goodies while catching up this morning. Let’s start with some perty pitchers, shall we?

I saw that dark piece of artwork this morning, the one at the top of this post. Profound Lore Records says it’s the cover for Unholy Congregation Of Hypocritical Ambivalence, which is the name of an album due out sometime in April by Impetuous Ritual. The band’s first album, Relentless Execution Of Ceremonial Excrescence, was released back in 2009. This is clearly a band with a pronounced fondness for multisyllabic utterances. I can get behind that.

Impetuous Ritual are from Brisbane, Australia, and their ranks include members of Portal and Grave Upheaval. That makes me interested. This music from their last album also makes me interested: END_OF_DOCUMENT_TOKEN_TO_BE_REPLACED

Well, just in case the well runs dry for bands like these (or they lose their thesaurus), we’ve found a gold mine of source material. (see what we’ve discovered after the jump . . .) END_OF_DOCUMENT_TOKEN_TO_BE_REPLACED