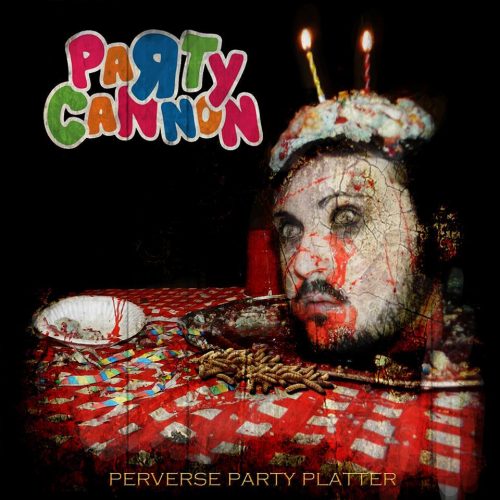 Perhaps you remember the Scottish band Party Cannon from our premiere of a song exactly one month ago. They sometimes spell their name PaRtY-CaNnOn. Their logo looks like something you might find on a child’s lunch box. They refer to their music as “Party Slam”. And the name of their new EP is Perverse Party Platter (it will be released tomorrow — July 7th — by Gore House Productions).

If you listened to our premiere of “Keg Crusher“, you know that all of this is a bit of a misdirection. As I wrote then, that song is a “seriously ruinous piece of mayhem, a blast of death/grind and slam that’s hard and heavy enough to cause blunt force trauma and viciously destructive enough to leave the rooms in your mind lying in a smoking rubble.” “I mean, sure, it’s a lot of fun, too, but the kind of fun cats have playing with mice before biting down on their skulls and devouring their brains.” END_OF_DOCUMENT_TOKEN_TO_BE_REPLACED

You would be forgiven if you’ve already got the wrong idea in your head about this song we’re about to premiere. I’ve already forgiven myself after I got faked out. I mean, look at the evidence:

The band is named Party Cannon, sometimes spelled PaRtY-CaNnOn. Their logo looks like something you might find on a child’s lunch box. The name of the song we’re premiering is “Keg Crusher“. And it comes from an EP named Perverse Party Platter (which will be released on July 7th by Gore House Productions). Also, the band refer to their music as “Party Slam“. Plus, there’s this comment by the band’s bassist Chris Ryan:

“While some bands in our genre take a more ‘mature’ route in later releases, we have definitely not.”

On the strength of such evidence, one might deduce that these Scots are a big joke, even before seeing this photo: END_OF_DOCUMENT_TOKEN_TO_BE_REPLACED