Well sir, yesterday’s post about the new song premiere from those brutal-death-slam carnivores in San Diego’s Condemned, attracted more interest than anticipated, so here we go again — because San Diego is home to more than one brutal death band with a fondness for slams.

We’ve got more than a passing interest in Pathology, (i) because their current vocalist is a Seattle-area dude named Jonathan Huber, who used to gutturalize for local-band-made-good, I Declare War, and (ii) because the awesome Pär Olofsson is responsible for the cover art on the new album, Awaken To the Suffering. So, when I got an e-mail from NCS reader Utmu last week about a new Pathology song that had premiered on Lambgoat, I perked right up.

I listened to the new song, vowed to post about it at NCS, and then something distracted me. I think it was a passing fly; it doesn’t take much. Fortunately, I was reminded about the song from a mention of Pathology in a comment by Homelessviking (cool name, that one) on yesterday’s post about Condemned. So, finally, we have the new song for you.

It’s called “Media Consumption” and it includes: Big, concrete-hard, slamming riffs; full-auto drumming; gruesome gutturals; and the squealing of a gutted pig. This sounds fairly standard, no? Well, the song also has an unexpected guitar solo that almost sounds jazzy, except it also sounds diseased. (more after the jump . . .) 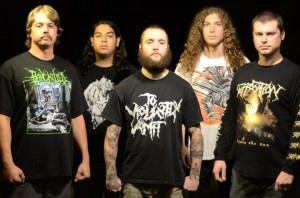 And while I was pulling up an embed for “Media Consumption”, I also found an excerpt from a second Pathology song called “Opposing Globalization”. It may have simply been lifted from a Victory Records YouTube sampler of both songs (here), but I’m using that stand-alone excerpt clip instead, since we’ve got the entirety of “Media Consumption”.

Awaken To the Suffering will be released by Victory records on September 13th and can be pre-ordered here. Pathology is now touring the US with Grave, Blood Red Throne, and Gigan. Shit, there will be some blood on the floor at those shows.

Both the full new song and the fragment of the second one are below.  So, go ahead and brutalize yourselves. When you’ve finished doing that, please write and remind me of my name. I’ve unfortunately suffered additional brain damage listening to these Pathology tracks.

Oh yeah, can you tell me where I live?