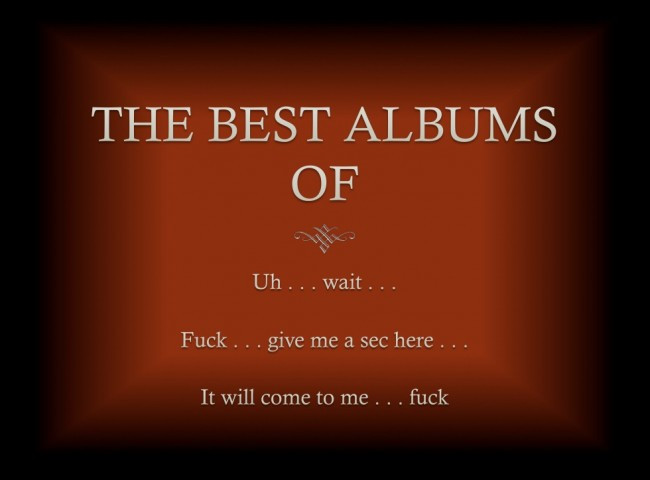 (The time has come.  What time is that?  Why, it’s the time when we begin publishing our own series on the best metal of 2011 — lists created by our writers, guest contributors, and members of metal bands who we’ve specially invited to share with us their lists.  And what better way to start than by turning to Phro for the kick-off?)

What a year it has been!  I think.  I don’t really remember it.  I think there was something to do with tentacles and a few zombie girls.  Seriously, someone please make the whole zombie/vampire/werewolf thing stop happening.  Please.  I’m begging you.  I can only take so much pithy teen angst foisted upon poor hapless creatures of the night.  GIVE THEM BACK THEIR BALLS, DAMNIT!!!

Seriously.  And wizards, too.  Enough of that shit.

What were we talking about?

So, I guess it`s customary for Internetters to make lists.  (I’m guessing this has something to do with cracked.com and their list-based economy.)  Well, who am I to buck custom?  To the listerator!

In no particular order, the best albums of the last year are/were/will later be regarded as having been: 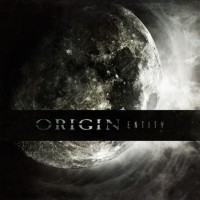 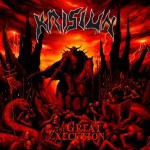 I also reviewed this album.  I’m also still terrified that if I say anything inappropriate, the band will suddenly materialize behind me and kill me to death by skinning me alive and rolling me in salt and chili powder.  They’d probably set me on fire and then put the flames out with their demonic demon pee, just to do it all over again.  Oh, please don’t kill me, Krisiun….

This album made my face, the head (of my penis), and my brain explode.  I also wish they’d chosen an easier name to spell. “Apocalypse” always fucks me up.  How about  something easier—like:

I could probably spell that correctly every fucking day with my arms tied behind my back while typing with my (depressingly tiny) cock.

Seriously though.  The name of the site is NoCleanSinging.  (I think it is anyway…holy shit balls, am I on the wrong site again???  NOCLEANSINGLES???  GET AWAY FROM YOU DIRTY ZOMBIE WHORES!!! NOOOOO…NOT AIRBORNE SYPHILIS!!! AAAAAAAAHHH….gga…uha…….)

Anyway, Fleshgod DESTROYEVERYTHINGANDMAKEITALLBURNTOTHEGROUND decided to spit in the face of the Boss and everything I hold holy by including clean singing.  It rocks my socks and impregnates my prostate.  Deal with it.  Not everything has to be dirty, growly, hate-screaming.  (Though anything less than about 75.5% is grounds for the Spanish Inquisition.) [Editor’s intrusion: Phro sorta reviewed this album here.]

Clinging to the Trees of a Forest Fire – Visceral 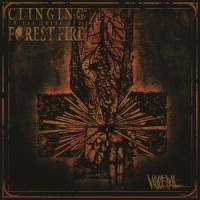 Deicide – To Hell With God 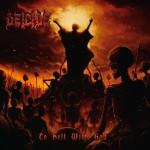 I don’t think I reviewed this album.  I don’t know why I didn’t, though.  Its fucking fuck-shit-piss-donkey-raping awesome.  It’s like you bought a bag of carrots, took them to the donkey farm, and then the donkeys practically just shoved their puckered assholes right in your face.

Actually, I lied.  This album is more like watching robot demons kill robot angels with giant swords made of the souls of sobbing, aborted robot babies.  It’s metal as fuck is what I’m saying.

(I really loved the guitar tone on this album.  I have no idea why, in particular, I loved it so much, but it was just…delectable.  Like the taste of blood splatter after a strawberry shortcake.)

I actually think this album was so beautiful and invigorating that the only thing I want to say is that it made me want to tap dance.

Insomnium – One for Sorrow

I’m not gonna lie, I had no fucking clue who these guys were until about a week before this album was released.  Yes, I know.  I turned in my metal license a while ago.  I’m actually not licensed to listen to metal right now, and I have to go to a couple of years of classes to get it back.  But whatever, I’m not licensed to have a tentacle dick or throw poop at monkeys or butt-fuck your mom with my Fist of Fisty Doom.  I still do all those things, so fuck you.

This album is…okay, so Animals As Leaders was beautiful and invigorating.  One for Sorrow is goddamn gorgeous and PCP for people who think PCP wasn’t really giving them enough of a kick.  Every time I put this album on, I black out and wake up sobbing in a pool of centaur blood.  You know why centaurs aren’t real anymore?  Because fucking One for Sorrow is so motherfucking powerful it created ripples in the time stream that went all the way back to centaur-time and all the humans then blacked out and tore them apart.  With their teeth.

This album makes me feel like a pissed-off 16-year old again…but in a good way.

Powerwolf – Blood of the Saints 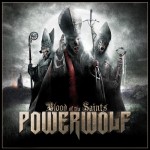 Okay, this album is just pure fucking clean singing.  There’s so much clean singing Hillary Duff ran out of the ability to sing cleanly because Powerwolf used up all the clean singing in the universe.  So, really, you should be thanking these guys for both making awesome music and shutting Hillary Duff the fuck up.  (I have no idea if Hillary Duff is even still alive.  Didn’t she O.D. on pain killers in her hotel room while fucking Charlie Sheen?  Who the hell am I thinking of??)

Anyway, I only know about this album because Shakespeare came back from the dead to review it.  I thought I was delusional, but it’s all right there on the Internet, so I guess it must be true.  So, this is my informal, two-sentence review.

This album would cure a heroin addict, because it’s so addictive it overrules all other addictions.  And then it bites your face, rapes your god(s), doffs a bishop’s hat, and then shits all over your bloody face.

This wasn’t really an “album”…in fact, I think it lasts about 5 minutes.  But that’s all it took your parents to make you, and if they had been listening to Noise when doing so then: a) you wouldn’t be born yet, and b) you’d be imbued with the powers of pure ferocious hatred.

I’m really including this for three reasons.  The first is that I love Wormrot.  I wish I were a high school girl, because I’d totally take Wormrot to the prom, get drunk, and have their bastard children.  The second is that I want to promote free music!  If you think they sold out by releasing music for free through Scion, I have a Fucktopus who’d like to use your anus as a puppet.  The third is, simply, that the music is fucking AMAZING.

Ummm…so…when I originally wrote this, I was convinced that Dirge had been released in 2010.  Apparently not.  So, fuck it, both Dirge and Noise are on this list.  If you have a problem with that, I think Wormrot will gladly cut your arms off and beat you to death with them.

Don’t worry, I`ll be there to film it to show to your now-orphaned children.

Not really an album or even an EP, it was just one song.  One song of the most horrific, vicious, unrelenting, soul-burning hatred ever put in music video form.  “Ima nanji?”  Kill-and-fuck-everything-ji. [Editor’s Intrusion: Phro sorta reviewed this, too.] 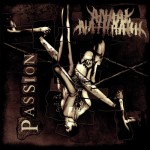 Why do people call these guys black metal?  They’re as black metal as Rage Against the Machine.  Anaal Nathrakh is grindcore that accidentally slipped and fell into to a pit of frozen hell.  This album rips and fucks everything to death.  This is like getting attacked by zombie lions who aren’t even hungry—they just want to see you scream and bleed.  This album is like doing speed and waking up inside of a cathedral, covered in the blood of a thousand nuns.  This album straps you into a chair and injects pure horror directly into your brain stem.  This album smashes your genitals with a sledgehammer and then replaces your mangled man/lady bits with medieval torture devices.  This album is open-heart surgery without anesthetics.

And, goddamn, this album is art.  (Most serious sentence in this piece.)

NOT METAL BUT YOU SHOULD STILL LISTEN TO THIS SHIT

If you’ve heard of the Comedians of Comedy (and probably you have), this is the guy who I consider the king of that particular group of social rejects.  He’s tiny, he’s geeky, and he played a rat in a Disney movie.  His comedy is a mixture of madness, social commentary, and poop jokes.  If you can laugh, you should probably own everything Patton Oswalt has done.  (Brian Posehn would also be on here if his album hadn’t been released last year.)

(This is the only video I can find on YouTube.  I don’t think it’s the best track on the album, but it’s still pants-shittingly awesome.)

I initially left this off the list, thinking it was released in 2009. But it turns out the only thing greater than Louis’s hilariousness is my stupidity. It was filmed in 2009 and released this year.

And holy fuck, is it goddamn funny. I literally had to pause it the first time I listened to it, because I was laughing so hard I could neither breathe nor stop the agony in my stomach. This album is to comedy what Lovecraft is to lonely nerds playing D&D by themselves on a Friday night. Godly.

(Louis also JUST released a new live video on his website. For $5. No DRM at all. I haven’t had a chance to watch it yet, but consider supporting his independent release. https://buy.louisck.net/)

Hank 3 – Ghost to a Ghost/Gutter Town 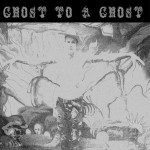 So, this is a country album.  There’s no two ways around it.  This is a true-blue country album.  And I’m telling you that, if you have even .0000001% interest in country, you need this album.  Now, in my opinion, it isn’t Hank III’s best album.  (That’d probably be Straight to Hell.)  But this album sets out to do something different and it succeeds, generally.  There are a few too many “concept album interludes”, and some of the “good ol’ Southern culture” is…well, just this side of being as smart as a stillborn fetus.  But the music is solid and as fun as passing gay marriage bills in Alabama.  (Look at ’em froth at the mouth!)

The first 10 tracks are the Ghost to a Ghost part, which is mostly more traditional Hank III country, while the second half is more a New Orleans style cajun/country blend (though not exclusively).  He even sings in fucking Creole on some tracks.  (Or maybe it’s French?)

The whole thing is very experimental, but it’s worth your time between bouts of head-banging and trying to fit into a school girl uniform to cosplay Sakura Gakuin.