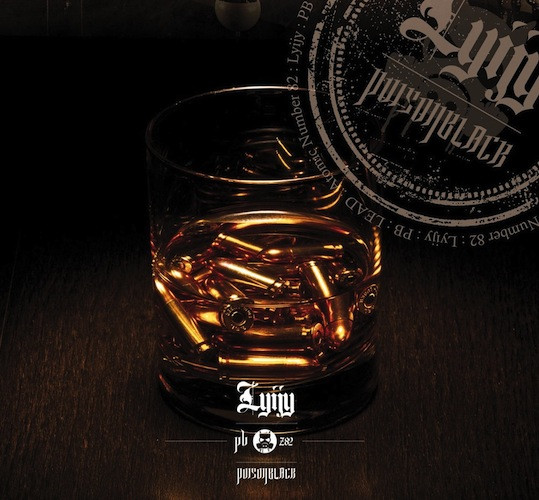 (DGR reviews the new album by Finland’s Poisonblack, which is out now on the Warner Music Finland label.)

We’re in a weird back half of the year as releases taper off in preparation for the mighty internet explosion of Top Ten lists. At the moment, it’s been a quiet lull with the occasional thunderclap of strong releases (see, for example, recent reviews for Glorior Belli, Otargos, and Skeletonwitch), and on this end, it’s afforded me time to really look at stuff outside of the general sphere of metal that we usually cover. I’ve been a longtime fan of the Finnish band Poisonblack, ever since 2006, so when the group put out a new CD this year I couldn’t help but check it out.

The band are not the heaviest thing we’ve covered, but for some reason a review of their new disc Lyijy (according to Google Translate: finnish for “Lead”) has been half-forming in the back of my head for some time. The group have, as of their last few releases, become something of a heavy rock band with a large blues influence in their riffs, drinking music for depressed bikers with a heavy layer of sleaze on top of it. Even though they’ve been around for a decade now, the name may not be overwhelmingly familiar to this side of the net since they aren’t our usual niche. However, Poisonblack are really good at what they do, and I have enjoyed everything they have put out. They’re one of my go-to bands when I want something more rock-feeling and less of the crushing heavy metal to which we willingly submit ourselves on a day-to-day basis.

Previously, I’ve rotated between the group’s latest three releases — A Dead Heavy Day, Of Rust and Bones, and Drive — but with Lyijy out now, does it qualify to join those discs for that rock mood? 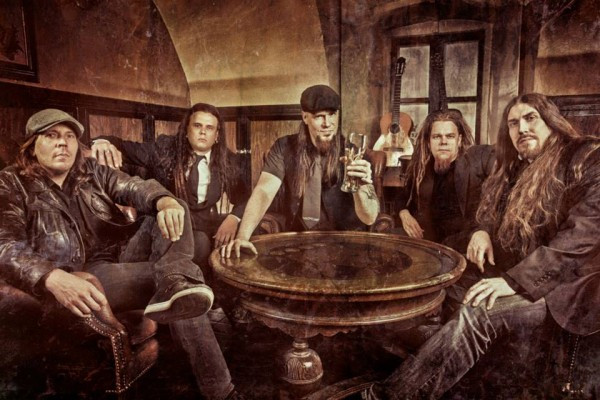 First, a history lesson to help explain to folks who the band are, why I got into them, and why you’re staring at a Poisonblack review on this site.

Poisonblack began life as a side project of Sentenced vocalist Ville Laihiala (Sentenced would eventually call it quits in 2005), combining his own songwriting strengths with Charon vocalist Juha-Pekka Leppäluoto, who would only be around for one disc, 2003’s Escapexstacy. Escapexstacy is very different from what Poisonblack’s music would become, something more of a standard keyboard-heavy, European goth-rock dirge-tempo disc — always feeling more like a slightly bluesier extension of Charon. Looking back it, the disc is pretty good for what it was aiming to do, but not great; but it did help get the Poisonblack project off the ground and grant Ville a space in which to be creative.

However, the group’s lineup would shift and three years would pass before anything else came out of the project. Ville would eventually adopt the vocalist and guitar-playing positions, and in 2006 the group would release Lust Stained Despair and a video for the single “Rush” — which is where yours truly came in on the Poisonblack discography. The band’s sound is much more energetic on Lust Stained Despair, but the album that really made me a fan was the follow-up album A Dead Heavy Day.

A Dead Heavy Day eschewed a lot of the goth-rock banners that Poisonblack had been flying, instead taking on a more aggressive, metallic, and heavier-leaning blues-flavored approach to the band’s sound. A Dead Heavy Day is the disc that I feel still defines a lot of Poisonblack’s sound. It’s a great album that came out of nowhere, and since then it has felt like the band have wanted to stay within that disc’s sphere of influence, while trying to iterate it in different directions. Of Rust And Bones was a slower album, with longer songs written specifically for smoke-filled rooms and depression. Though it’s not very fast, it did give me one of my favorite songs by the band in the form of “Casket Case”.

Drive would take the A Dead Heavy Day formula in the opposite direction, speeding things up and making it more macho — giving it a heavy air of sleaze at which previous songs had only hinted. At times it leaned a little too heavily on the cars, women, and beer formula, almost verging on caricature, but Drive came really soon after Of Rust And Bones (only a year between the two!), so in a way it felt like the band had written so many songs during one session that they just divided them between the two discs. Still, because A Dead Heavy Day was so good it was okay that Of Rust And Bones rode its coattails for a little while.

Hopefully, the long, rambling history lesson now explains why you’re staring at this record’s album art on the NO CLEAN SINGING page. Now, with Lyijy (still holding strong on typing it!) out and the band pushing the blues-rock formula a little further, it feels like the group have finally started to get away from A Dead Heavy Day’s shadow and have put out some of their best material. 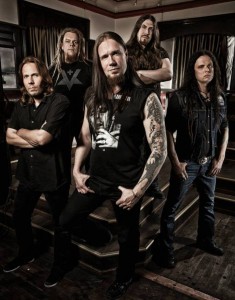 When it comes to a groups such as Poisonblack, we often write reviews that focus on the artists moving forward and progressing, thereby substantially making their material ‘better’, but with Poisonblack the idea of an artist progressing doesn’t really work. We write about a group moving forward and “maturing” in their careers as if there were a metric by which to measure progress other than an increase of skill. The guys in Poisonblack are already good musicians, however, so it’s not like they are suddenly going to shift genres, nor have they ever been inclined to explore outside the realm of what they do already. So using the metric of “the band progressing forward” feels silly — although the idea of Poisonblack becoming a brutal death band for a disc is one so absurd I might welcome it with open arms.

I personally consider A Dead Heavy Day a high mark for the band, and in a way perhaps the band think so too, because they haven’t really changed their songwriting methods since then — they’ve just played with different ways to achieve the same result. Because of this, Poisonblack are one of those bands where we ask, “Is this new batch of songs as good as the last set?” And in that sense Lyijy is absolutely as good, and sometimes even better. Lyijy is probably the grimiest, most aggressive-feeling disc that Poisonblack have put out since A Dead Heavy Day; the fact that it reflects much of that earlier album, but as an almost darker twin of it, without falling into caricature as Drive did, is great.

There are certain lines that Ville utters throughout Lyijy that fit in perfectly with the depressing mood that the disc radiates, lines that were he a character in each song you should become absolutely disgusted with him. Much of “Home Is Where The Sty Is” is like that. It’s a strong-as-hell opening song, filled with hard-driving guitars and an upbeat tempo, combined with lyrics verging on the sort of inebriated misogyny that a drunk in a bar (like the protagonist of the song is) might utter. When the more depressing tunes toward the end come — songs about suicide, people leaving, and even songs about characters like the one in “Sty” at their worst — you can’t help but feel that it is their own fault they wound up that way. Lyijy is a disc that conveys a very heavy sense of self-loathing; the cover art of a liquor glass filled with bullets makes perfect sense at that point.

Poisonblack are at their absolute best when it comes to the faster, hard-driving songs though — and Lyijy has a bunch of them. The aforementioned “Home Is Where The Sty Is”, with its disgusting overarching story, is filled with crunchy riffs, and “Down The Ashes Rain” and “The Flavor Of The Month” feel like extensions of it. “The Flavor Of The Month” verges on “Casket Case” as one of my personal favorite Poisonblack bluesy stomps, and if it doesn’t make it on its own, it’ll certainly be standing there with its fraternal twin “Death By The Blues”. Either way, the first half of Lyijy is just filled with the guitar crunch of nihilistic songwriting — packaged together with catchy choruses and head-nodding riffs.

Even on the back half of the disc the band still manage to pack in two or three more fast songs, so that those speedier numbers make up the majority of Lyijy, amongst the wrist-cutting slower songs. Lyijy bounces between two moods, one of full-on aggression and another of full-on depression — one often the result of the other. It is an album dedicated to self-destructive habits, a theme that Poisonblack have often played with. They’re not a very subtle about it either, especially when you have a song entitled “Maybe Life Is Not For Everyone” laying there on the track list, that tune being one of the only slower songs on the front part of Lyijy, one suitable to prepare you for songs such as “Them Walls”.

Lyijy represents a new high mark for the band, ranking right up there with Dead Heavy Day, which is great given the slight sense of fatigue that was slowly encroaching after Drive. Maybe the group have realized that they are at their best when they’re doing the fast and self-destructive songwriting. It’s not a metal disc by any means, but it rocks super-hard and is capable of triggering some serious headbanging anyway. It’s hard not to sing along with each song even though some of them make you feel absolutely disgusting afterwords; the lyrics are voiced so earnestly that you can’t help but feel that the protagonist of each song is deadly serious about what he’s saying. You might fault the band for essentially writing what feels like the darker, evil shadow of A Dead Heavy Day, but this sort of aggression and songwriting style is where Poisonblack excel. It’s as if  they finally found the even middle ground between Drive and Of Rust And Bones and then went, “Yeah, but what if it drank a lot by itself and constantly held a gun to its head” – and that is what Lyijy is.

Here at NO CLEAN SINGING we normally cover crushingly heavy stuff while occasionally reaching outside of that spectrum, with the idea that “If the music is really good, people will appreciate it,” and Lyijy is one of those cases. It’s not super-heavy metal, but it is a really good blues-rock album with a really heavy, self-loathing stomp and it is one worth looking into if you’re fatigued from the endless array of blast beats and shrieks with which we normally supply you.