Although I never managed to write a complete review of this Bergen band’s 2013 album The Tower, I did write about every one of the three songs that premiered before the album’s release, so that counts for something I guess. The album is a strange and wondrous creation that sounds like nothing else I heard last year. The first song to premiere remains my favorite — and it’s the one I’m now adding to this list.

“The Tower” is sort of like a blend of melodic death metal, post-rock, and Broadway show-stopper, spun in an avant-garde centrifuge — and Bjørnar Erevik Nilsen’s mainly clean vocals will take you into the clouds. He sings, “It Soars!”, and his voice soars like you won’t believe. He also assumes a variety of other vocal personae in this allegorical song about the materialism of modern life in the Western world.

The lyric video for the song is also a visual feast, which features the wonderful artwork of Costin Chioreanu. Watch and listen next…

As in the case of the Vulture Industries album, it’s this very eclecticism that’s a big part of Revelatio’s appeal. Take, for example, the song I’m now adding to our list. “Le Serment des Hypocrites” is heavily groove-oriented and infectious as hell, but it also includes an eerie, atmospheric guitar melody, a spooky solo, and a finish that moves from blast-beat drumming and tremolo thrashing to a swarming guitar melody over jackhammer rhythms. Listen below. 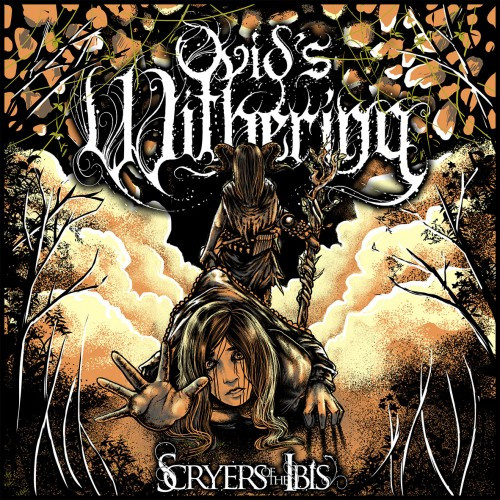 DGR reviewed the 2013 debut album by this Tampa-based band, Scryers of the Ibis. In that release, they successfully combined elements of death core, death metal, symphonic metal, and black metal. To quote DGR:

“Scryers Of The Ibis is a fucking super-impressive debut by Ovid’s Withering. There’s no other way to put it. The band took older material and made it sound brand new, and the newer songs are just the sheer embodiment of violence throughout. The group have a gargantuan melting plot of influences, and you can recognize so many different elements and strains of them in all of the songs, yet the band still succeed in using them to create a sound that is (almost) entirely their own.”

I think DGR’s favorite song (and certainly mine) is “Murder To Dissect”. It hits very hard — repeatedly, and right in the sternum — and yet the guitar and keyboard performances give it an “epic” aura as well. There may be deathcore scaffolding in here, but the band have built an ornate edifice on that framework which transcends the genre.