ACxDC are from SoCal. The last time I wrote about them was almost two years ago, soon after one of vocalist Sergio’s newborn twins (Savina) had to have surgery to repair a hole in her heart. After many short releases, they finally have recorded a debut album named Antichrist Demoncore. Yesterday an advance track from the album premiered. Its name is “Destroy Create”. It’s a powerviolence assault, both searing and crushing, and maybe more complicated than you might be expecting.

Antichrist Demoncore will be released by Melotov Records on June 24. Invisible Oranges has the exclusive song stream, so check it out here:

In late April we reported details about the impending release of The Demon King, the new album by India’s Demonic Resurrection. To recap briefly, it will be released by Candlelight Records worldwide, with the US release coming on July 15 and on July 14 in Europe and the UK. Universal Music will release the album in India on July 13.

Yesterday the band finally unveiled the full cover art for the album, which I think is quite cool. It was created by Michal ‘Xaay’ Loranc, who also designed the band’s last album cover and has also worked with the likes of Behemoth, Vader, Necrophagist, and many others. Click the image to make bigger.

The album is available for pre-order from Candlelight in the UK here. Pre-orders in the US and India are coming soon. Below you can check out a track from the album named “Death, Desolation and Despair”, which was included on a Candlelight Records sampler that I wrote about at the end of April. 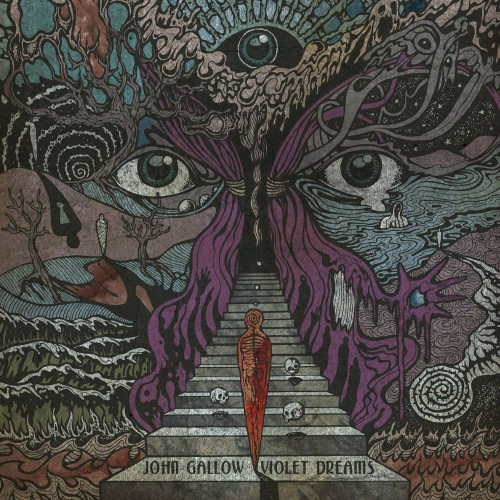 John Gallow appears to be the solo project of John Gallo, who is a member of Blizaro from Rochester, NY, and a band named Orodruin. John Gallow’s solo album is entitled Violet Dreams, and it’s being released in July on the I, Voidhanger label. News of the album caught my eye because of the cover art by Costin Chioreanu that was disclosed yesterday. We’ve featured his art many times here at NCS. As usual for him, it’s wonderful.

Having seen the cover, I then quickly discovered a stream of an advance song named “Wall of Doom”. John Gallow claims inspiration from Paul Chain, Candlemass, and Black Sabbath, and “Wall of Doom” does indeed begin like a 70s-inspired slice of “classic” psychedelic doom. But it then morphs into something unexpected and definitely off the beaten path. It’s an Exception to our Rule, and a really interesting one. 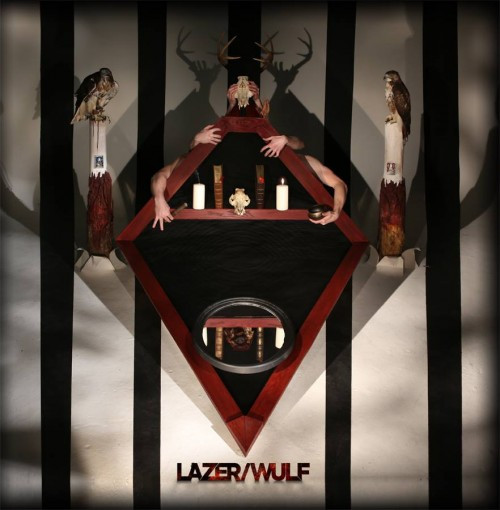 The three-piece band named Lazer/Wulf is yet another new name for me. A label named Retro Futurist plans to release a Lazer/Wulf album named The Beast of Left and Right on July 15. What initially grabbed my attention was the report that the album was created as a palindrome, “with songs mirroring each other as backwards versions”. That should be interesting.

In the center of the album is a song named “Beast Reality (Center Piece)”, which debuted yesterday. It’s mainly an instrumental piece, but trust me, it’s worth your time. Your head will move, and what’s inside it will spin around as if in a blender. You may also experience some spinal compression from the bass work. It’s an exclusive stream elsewhere, so go here to listen (and check out Lazer/Wolf on Facebook):

As you know if you follow us, Origin’s new album Omnipresent is due out on July 4 (Europe) via Agonia Records and July 8 (North America) via Nuclear Blast USA. Yesterday the band premiered a lyric video for the second song from the album to get airplay so far. This one is named “All Things Dead”. I like it even more than the first song. You’d better be sitting down before you hear it; otherwise, it may throw you down.

Andy Synn pointed me to this last item. The Swedish duo Vintersorg (which includes Borknagar’s vocalist) released a new video yesterday. It’s for a song named “Lågornas Rov” (‘The Flames Prey”), which appears on their next album, Naturbål (“Nature’s Bonfire”). It’s due on June 27 from Napalm Records.

Vintersorg has such a great voice, both harsh and clean, and it shines on this song. And the music is also really good — a combination of black metal and folk elements along with both progressive and classical flourishes. Naturbål should be worth searching out.

Check out Vintersorg’s Facebook page here. The album can be pre-ordered at this location.