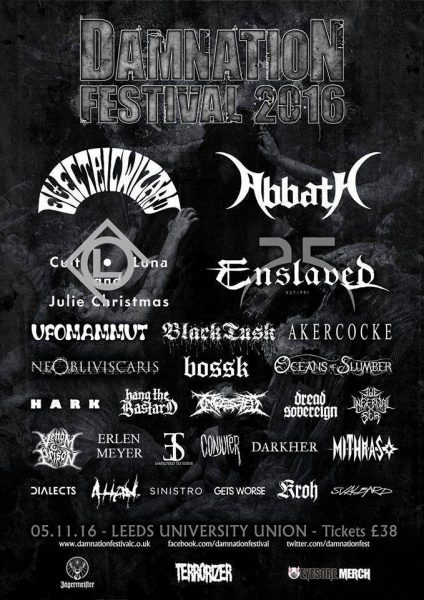 (Our fortunate friend Andy Synn will be attending Damnation Festival 2016 next week in Leeds, UK, and in this post shares a preview of how he’ll be spending his time. Oddly, there is no mention of beer.)

Not all of you might be aware of this, but it’s not uncommon for PR agents and festivals to only issue press passes on the contingency that the writer/blog/magazine makes sure to produce some preview coverage in advance of the show/event in question.

Now although I don’t often ask for accreditation myself (something about the whole process just doesn’t feel right to me), on those rare occasions when I do I have absolutely no problem agreeing to the sort of quid pro quo set out above. After all it makes sense for the organisers to try to get as much coverage as they can, and as long as no-one is trying specifically dictate or mandate exactly what I can (and cannot) write, I don’t see any issues.

After all, I wouldn’t want to go if I didn’t think the music would be worth it, would I?

So, without further ado, I hereby present you with a little preview of next week’s Damnation Festival, complete with music and random ramblings about each band I hope to get to see.

First on my itinerary are those lovely reprobrates from Conjurer, who will be playing the EyeSore Merch Stage at 14:00.

Now, as big a fan as I was of their EP, live is where these boys really shine, and I’m really looking forward to hearing them get the party started with their distinctive brand of gloomy groove and Doomongous riffery.

Up next I plan on getting to the Terrorizer stage well in advance of the mighty Mithras… who, it turns out, I’ll actually be seeing for the second time that week, since we (Beyond Grace) are set to support them (and Rannoch) at The Black Heart on Monday.

There’s probably not much more I need to say about Mithras overall that I haven’t already said here, and here of course, but mark my words, and mark them well… I cannot wait to see them.

If I’m quick I should be able to skip on over (though perhaps not literally, then again…) to the Jägermeister Stage in order to bang my head and shake my sludgy stuff to the last ever show by lairy London riffmongers Hang The Bastard, who I fully expect to bring their signature swagger and deliver the goods despite the solemn nature of the occasion. After all, if it has to be a funeral, why can’t it also be a wake?

This will be followed in quick succession by a rapid dash back to the Terrorizer stage to get my ear drums pummelled by the gut-wrenching Death-Grind of Venom Prison, whose new album I’ll be reviewing next week.

Here’s a little preview for you though – it’s one nasty motherfucker, perfect for fans of Dying Fetus, Suffocation, Cryptopsy, etc

After another quick scramble (can you tell I’m not going to be doing much in the way of sitting down, or eating, or talking to other people during the course of the day?) I should then be able to catch the proggy delights of Oceans of Slumber back over on the Jäger stage, and I’m really intrigued as to what they’re going to sound like live.

I don’t for one second imagine that Cammie Gilbert’s voice is going to be anything less than perfect, but a lot of the material that made up the band’s new album (which I reviewed here) relies on complex dynamic shifts and bold, yet subtle, alterations and delivery, and I’m really hoping they come across as good live as they do on record.

I haven’t yet decided who I’m going to see after Oceans of Slumber. It’s currently a toss-up between Aussie sensations Ne Obliviscaris and resurgent Brit Metallers Bossk, although I am leaning slightly more towards the latter right at this moment because, as much as I do really enjoy NeO both live and on record, I’m not as much of a raving fanboy as some people I could name, and I have seen them before. Whereas I unfortunately never got the chance to see the Bossk boys first time around, and their new album has been in steady rotation on my mp3 player this year. So we’ll just have to see what happens on the day in this case.

Whichever of the two bands I choose however, I’m going to be leaving their set early, because there is no chance… no chance in hell… that I’m not going to be there to see Cult of Luna & Julie Christmas perform Mariner in its entirety, since their announcement was one of the big reasons I knew I HAD to go to Damnation this year.

Now I know some people for whom Mariner is firmly set in stone not only as their album of the year, but as their favourite Cult of Luna album full-stop. And although I wouldn’t quite go that far (I’m still FAR more in love with Vertikal myself), the opportunity to see this collaboration live and in the flesh is one that I simply cannot miss.

I would however like to apologise to The Infernal Sea, who clash with CoL’s performance, and whom I’m afraid I’m going to have to miss out on this time around! You should all still check out The Great Mortality asap if you haven’t already though.

After Cult of Luna I’m again of two minds… do I go for the Faustian Blackened Death of Akercocke or the sludge-soaked Swamp Metal of Black Tusk? Decisions, decisions. Again, I’m a bigger fan of the former than I am of the latter, but I also don’t worship the ground they walk on like some do, and I have seen them before. Whereas Black Tusk would be an entirely new experience for me.

Once again, we’ll have to just see where the evening takes me.

Similarly, I’m not entirely certain whether to go with Abbath or Dread Sovereign for my next metallic fix, but I’m about 75% sure that DS are going to get my vote on the night… since I don’t actually think the Abbath album is all that great. I know, shocking, right?

Seriously though, some classic doomery from Dread Sovereign sounds much more appealing to me right now than watching some Kiss-does-Immortal pseudo-rock-star shenanigans.

If there’s one thing that I definitely AM certain about however, is that when 09:30 rolls around I am going to be at the Terrorizer stage watching Enslaved celebrate their 25th anniversary. And just you try and stop me. See what happens…

So there we have it. My provisional itinerary, and a few rambling thoughts, ahead of next week’s edition of Damnation Festival.

Feel free to comment below and tell me what I’m missing out on (I haven’t decided yet whether I’m going to stick around to catch Electric Wizard, for example), or to let me know if you’re also going to be attending (and what bands you’re most looking forward to), and maybe even help me decide which bands I should see in those cases where I simply haven’t made up my mind yet!

Damnation Festival will take place on November 5, 2016, at the Leeds University Union. in merry old England. Tickets are available HERE, HERE, and HERE.

One Response to “DAMNATION FESTIVAL 2016: PREVIEWS AND PONTIFICATIONS”