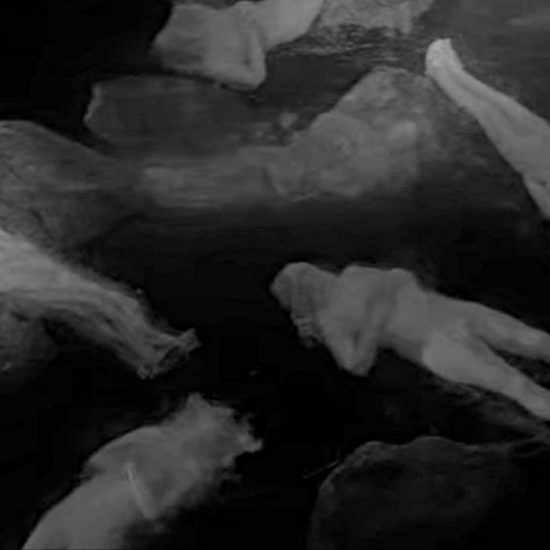 I think it’s fair to say that I’ve gone off the deep end. Between the new-music round-ups I prepared on Friday and Saturday and the column you’re now staring at, I’ve thrown out 28 advance tracks, EPs, or albums, almost all of which surfaced just within the last week or two. I don’t expect any normal person to pay attention to all of it, and I don’t really know how any normal person would pick and choose among all those tracks. So why have I done this? Don’t know… still waiting on the psychiatric evaluations….

I decided to begin with one of the two complete albums in today’s collection. It landed, fully formed and without warning, on the most recent Bandcamp Friday, two days ago. As you can see, I didn’t defer paying attention to it, because the man behind it is Mick Barr (of Krallice and Encenathrakh).

I didn’t realize until visiting Metal-Archives that Beastlor’s first demo (The Forest For Which We Have Killed) was a 1998 release. According to the same source there wasn’t another one until 2015’s Unholy Hemisphere. And now this album, Galaxies of Death.

It would take a stone cold listener not to be caught up and immediately entranced by the urgent, gripping riff that opens “Ignorant Sin”. Even though it grows increasingly beleaguered in its mood as it evolves, it’s the kind of thing you don’t want to end — until you get another variation on the theme that’s defiantly pulse-pounding, and then another one that flies like the wind and darts like a kestrel on the hunt — and then another that just seems deranged. Underneath all of that is a sequence of rhythms that’s just as variable; it often seems like an enormous avalanche in progress, but will also pop your neck like a whip. And man, when the opening riff returns, it’s a glorious thing. The whole fucking song is glorious.

And that’s just the opener. But don’t expect a let-down. All of the remaining five tracks are also cornucopias of piercing, immediately magnetic riffs (and multiple variations on them) with a molten emotional core. As they range across you, expect passages of tension and torment, flailing confusion and dreamlike musing, raging defiance and dervish-like exultation. The underlying rhythms also remain continually variable and interesting, with just as much care and attention given to the composition of the bass lines and drum patterns as everything else.

The album also includes a variety of tonal accent marks (all of them just as emotionally evocative as the riffing), from the cracked chiming tones redolent of misery in “Light Will Disrespect” to the glittering but increasingly ominous and downcast sorcery that occupies the first 3 1/2 minutes of “Canaan” and the funereal instrumental array that ends it, as well as the entrancing, trilling chords that start the absolutely electrifying “Become the Planet” (one of the songs, the other being the title track, that made me think of a whirling dervish — engulfed in flames).

Having only listened to the album twice so far, is it too soon for me to call it a tour de force? I don’t think so!

For now, Galaxies of Death is a digital download, but a physical release is expected later this year (there’s an October 13th date on the Bandcamp page). 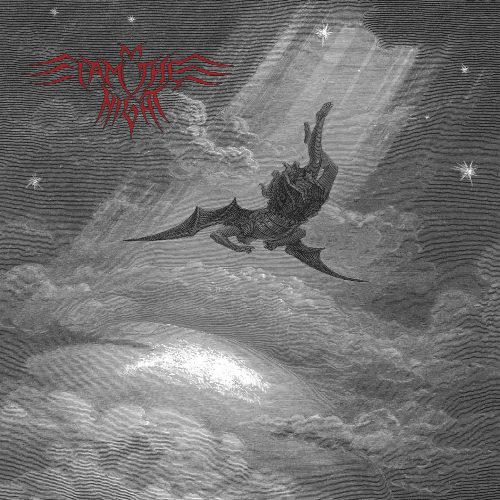 I AM THE NIGHT (Finland)

Curiosity got the better of me, the intrigue having been spawned when I saw that I Am the Night was a new black metal band formed by Markus Vanhala (Insomnium, Omnium Gatherum) and Janne Markkanen (ex-Omnium Gatherum), who then recruited drummer Walteri Väyrynen (Paradise Lost, Bodom After Midnight) and vocalist Solanterä (Horizon Ignited) to fill out the line-up. Undoubtedly lured by the presence of these names, it didn’t take long for Svart Records to latch onto them.

Rather than a passing dalliance, Vanhala says this is a real band with a future, and a way of expressing a long-standing love for In The Nightside Eclipse, Storm Of The Light’s Bane, De Mysteriis Dom Sathanas, and other classics from the halcyon days of ’90s black metal.

The band’s first single, presented through a video, is “Hear Me O’ Unmaker“. It doesn’t reinvent the wheel, nor even add any ornaments to it, but as homages to a by-gone era go, it’s still a thrill to hear. With the riffing timbre of raw black metal, it’s an almost unrelenting firestorm of hurtling drums, high, scathing chords, and furious, caustic vocals. As that dense wall of guitar-and-synth sound evolves and the drum rhythms and vocals shift, the mood changes from viciously insane to oppressively anguished, from plague-stricken to exultant.

Svart Records is releasing “Hear Me O’ Unmaker” as a vinyl single, with a cover of Emperor’s “Acclamation of Bonds” on the flipside. The band’s debut album, While The Gods Are Sleeping, will be released in the late autumn.

I AM THE NIGHT:
https://www.facebook.com/iamthenightofficial/ 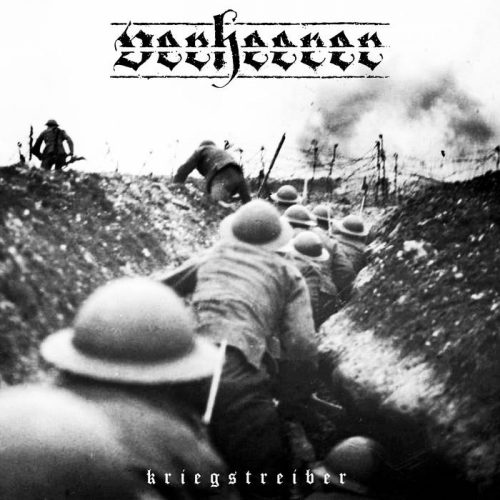 In April the German band Verheerer embarked on a project of trying to release a new single every month until they are able to resume playing gigs. The one they released that month, “Totenvolk“, was really good (you can find it here), and so is the one they released yesterday as the May offering.

I overlooked the fact that yesterday (May 8th) was V.E. Day, the commemoration of Germany’s unconditional surrender to the Allied forces in World War II. Verheerer didn’t forget. This new single, “Kriegstriber“, is itself a commemoration. Its poetic lyrics (which you can and should read at Bandcamp) are a moving remembrance of the millions who died in that war and presumably others, and in particular of the soldiers who have been sacrificed at the altars of tyrants.

At nine minutes in length the track gives Verheerer room to maneuver, and they make effective use of the time. Despite the presence of a vibrant, prominent bass and neck-snapping drum rhythms, the changing music channels misery and hopelessness, fever and fear, thrusting belligerence and poignant loss. And the multi-faceted vocals are really remarkable (ravaging in every expression). In the final minutes an arresting vocal sample unfolds over a slow, doleful acoustic melody, and it proves to be just as shattering as everything else. 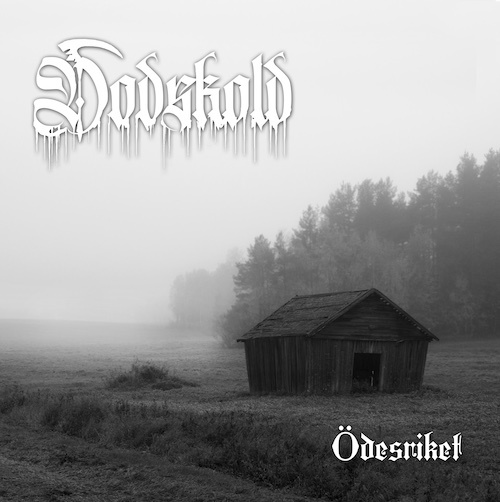 Dodskold is a new band formed by three unnamed members of the Scandinavian black metal underground, and two compelling tracks have surfaced so far from their debut album Ödesriket.

In its opening moments before the rhythm section and vocalist come in, “Misärens Triumf” is even more saturated in a feeling of abandonment and grief, and even when they do arrive it still feels like we’re drowning beneath black waves of death and desolation. The song includes a riveting duet of jagged growls and strident clean vocals that make the beleaguered resonance of the music even more pronounced. As soul-suffocating as the music is, it’s also spellbinding.

Ödesriket is being released on vinyl through Pesttanz Klangschmiede, and on cassette through War Records. It will be available digitally on May 28th. 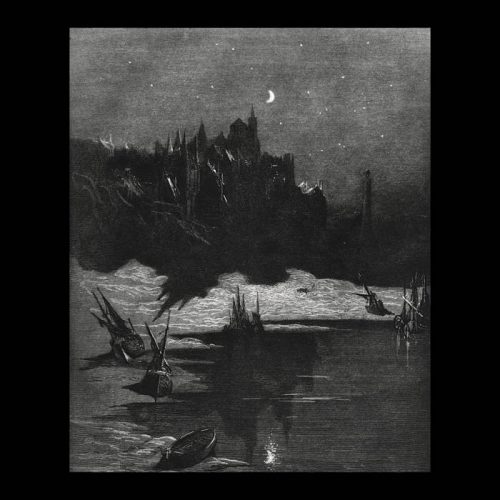 ASCEND TOWARDS THE MOON

Following hot on the heels of a 2020 debut album named At the Heart of All Beauty Lies Something Inhuman (reviewed here), this mysterious band released another one two days ago, accompanied by quotations from Camus and Sartre.

Though perhaps most naturally pigeon-holed as “depressive black metal”, the debut album was a multi-faceted experience, and so is this new one. Launched by a sublime overture that really does feel like ascending toward the moon, Ilmestys then explodes in an effusion of tumultuous drums, heaving bass, and waves of magisterial but bereft synths, coupled with piercing guitar vibrations and tormented screams.

That second song, “Blood and Wrath” sets the stage for some of what is to come, but not all, as the wide-ranging “Cosmic Ruin” soon reveals through its exotic, wistful, and astral melodies and restrained (but still potent) rhythms. Trying to map the course of the remaining songs and all their tonal gradients (of which there are many) would risk tedium. Suffice to say that during many moments they are spellbinding and mystical (especially the electronic instrumental “0 (Abyss)”, as well as introspective and sad, but they also reach levsls of intensity that are emotionally ruinous — and usually all that happens in the same song. 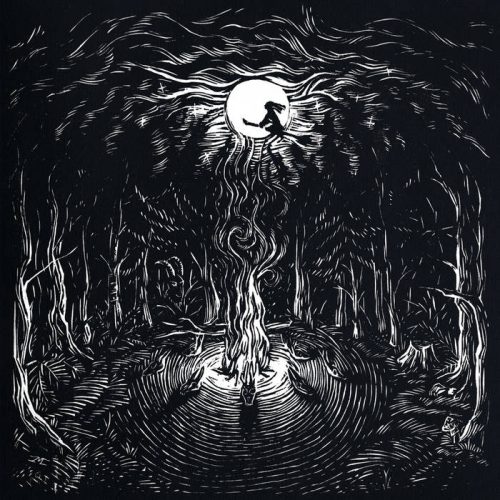 The next song, “Nieś Biesie nieś!“, is quite a captivating diversion from the music that precedes it in today’s collection. Among other things, the instruments used by by this Polish group (whose name means “strong wind”) include flute, saz, bouzuki, jaw harp, mandolin, and other unidentified string instruments. In other words, this is folk music — but not just any garden-variety folk music.

A witch flies across the moon on the cover art, and for good reason, because this is most definitely a witchy (and bewitching) song. The feverishly rippling arpeggios, vigorously thumping percussion, and wild, wailing voices make it so, but so does the sinister and menacing atmosphere created by the big slow drumbeats and dismal bowing tones. The images in the companion video of bodies writhing about a midnight bonfire are beautifully conceived too.

The album that includes this song, Czary i Czarty (“Witchcraft and Devils”), will be released on May 21st by Godz Ov War Productions. 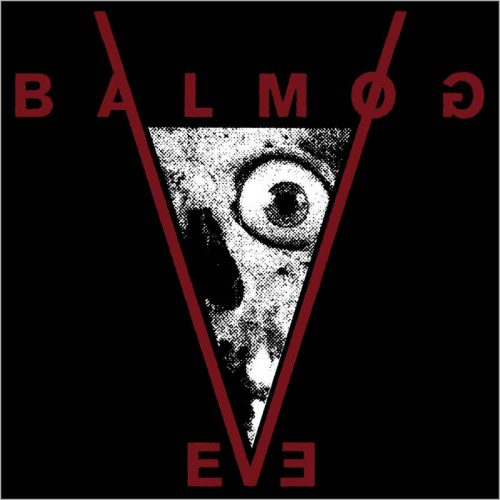 And to conclude I’ve chosen another song that’s a twist on most of the other music in today’s collection, courtesy of the Spanish band Balmog, whom I’ve written about on other occasions over the last 3+ years, most recently focusing on their spectacular 18-minute single “Pillars of Salt” from the spring of 2020 (if you haven’t heard that, go here without delay).

This new song, “Desacougo“, is a five-minute collage of styles. Balmog don’t have pretensions of being “avant-garde”, they just go where their muse takes them, and here it takes them from scathing, hammering, tension-building black/death to bouts of unnerving dissonance… to glittering synthwave coupled with eerie guitars and gravel-throated spoken words… and onward to mysterious cascades of crashing, shining, and shimmering chords over  transfixing drum-and-bass patterns. It all holds together beautifully well, and is further proof that Balmog are one of the more interesting groups out there practicing our dark arts.

“Desacougo” is the first track to be released from a new Balmog album named Eve. It was produced by Javi Félez of Graveyard — who is now also an official member of Balmog — at his Moontower Studios. It was mastered by Jaime Gómez Arellano at Orgone Studios. It will be released by BlackSeed Productions on May 28th.

P.S. Despite my admiration for Balmog, I managed to overlook — until just now — an EP released in March of the year which includes “Desacougo” and two other songs that I’ve now got to hear (it can be found at this location). By the way, those other two song don’t appear to be included on the forthcoming album.

One Response to “SHADES OF BLACK: BEASTLOR, I AM THE NIGHT, VERHEERER, DODSKOLD, ASCEND TOWARDS THE MOON, WICHER, BALMOG”