Last week we presented photos from the first day of the festival and the second, and today the focus is on the performances that took place on the third and final day, with sets by nine bands at Austin’s Lost Well. And without further ado, here’s our selection from the many great images that Teddie captured during these performances: END_OF_DOCUMENT_TOKEN_TO_BE_REPLACED 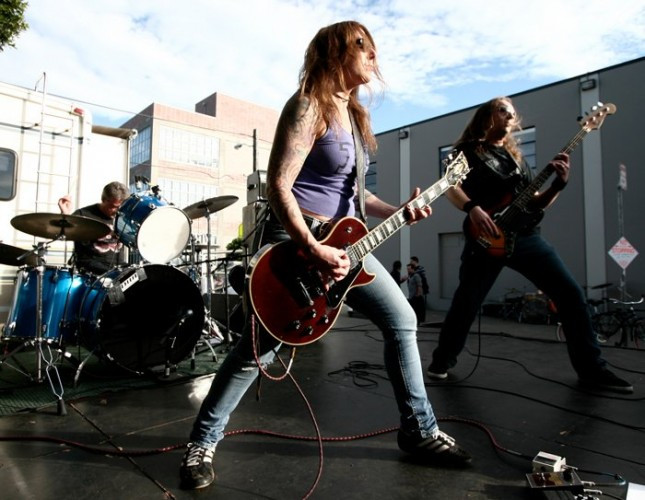 (Comrade Aleks returns to our site with an interview of Lori S. of Acid King.)

Acid King (San Francisco, California) are one of the most inspiring and influential bands on the American psychedelic doom scene. They’ve rocked since 1993 and it seems that they’ve found a source of really great doom tunes somewhere in the Klamath Mountains! Acid King have released their new LP Middle of Nowhere, Center of Everywhere on Svart Records after nearly a decade of silence, and I have to admit that it’s one of the best records of 2015 for me. I was lucky enough to have this brief discussion with Lori herself, eternal mastermind of this hypnotic band.

Hi Lori! Thanks for finding the time for this interview. The road from Acid King’s previous record III to Middle of Nowhere, Center of Everywhere took almost 10 years. What kind of obstacles did you meet on your way?

Life! Marriage, Divorce, Layoffs, being together for over 20 years, are just a few! We also started to tour Europe on a regular basis and spent more time doing that than trying to write a record. END_OF_DOCUMENT_TOKEN_TO_BE_REPLACED