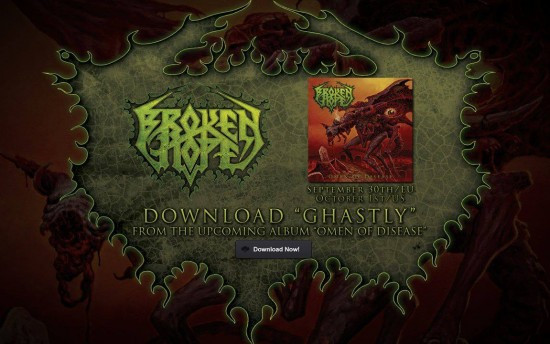 Well, I made it back home from Idaho last night. Thanks to the wind gods, the smoke that had shrouded the valley where I was working cleared long enough for the plane to take off. I took a few pics from outside the airport to show what was going on back in the direction I’d just come from. I’ll put those at the end of this post. But first things first: here are three kickass new songs (one of which comes with an eye-popping video) that I came across late last night after I got home.

You want an old-school band who make death metal sound fresh? I give you Broken Hope. I’m getting more and more pumped up about their new album Omen of Disease (their first in 14 years). One week ago we streamed the first advance track from the album (“The Flesh Mechanic”). And then yesterday the band’s label started giving away a second track (you’ve got to surrender your e-mail address to get it). This one is called “Ghastly”, and it’s just as striking as “The Flesh Mechanic”. Much of the song is simply . . . ghastly: the horrific guttural growls, the jagged riffs, the weaponlike drumming, the overarching atmosphere of menace.

But that is definitely not all this song delivers. The pulsating, harmonized guitar lead will grab your attention almost immediately. The choir will surprise you later. Or it would have if I hadn’t mentioned it (sue me). Hell of a song. Go HERE to download it.

And how about the band’s new promo photos by Stephen Jensen? Handsome motherfuckers, aren’t they? There are two more after the jump, plus a YouTube upload of the song. END_OF_DOCUMENT_TOKEN_TO_BE_REPLACED

Although I’ve been temporarily distracted by such things as Tim Lambesis getting arrested for soliciting murder, Frank Palmeri getting his shit zapped in Russia, and this guy (who used to play some licks for Obituary and Six Feet Under) getting arrested for running a meth lab — after calling the cops himself — I finally remembered that metal is about the music. So here’s some actual music and music news that I came across this morning.

Unless you’ve been living in a cave, you know that NYDM legends Immolation have a new album (Kingdom of Conspiracy) coming out on May 13. Although I’m the sort of fan who would buy the album without hearing any of it (because it’s fuckin’ Immolation, and they seem to just get stronger with age), others may wish to hear it first. And you can now do that because today the full album went up for streaming exclusively at Terrorizer. Go HERE to listen.

Sweden’s Arckanum also have a new album coming. Entitled Fenris Kindir, it’s due for North American release by Season of Mist on May 14. Explaining the album’s name and concept, Arckanum main man Shamaatae is quoted as saying this: “The sounds and music on this album are my auditory vision of the march of Fenrir convoyed with his hordes of giant wolves from the depths of the underworld to face Ragna Rök with warlike glory – deformed giant-wolves swarming in thousands. This is my tribute to the wrathful, harsh and untamed anti-nature of Fenrir’s mighty essence! The anti-cosmic enemy of the worlds! Heill Tungls Tjúgari! Heilir Fenris Synir!” END_OF_DOCUMENT_TOKEN_TO_BE_REPLACED