The song is mid-paced and majestic in its atmosphere, with a soaring chorus to match whispers of black metal darkness in its jagged verse. For most of the song’s duration, the vocals are near-clean, though ragged and anguished in their passion. The song has gotten stuck in my head, too. Check it out next. END_OF_DOCUMENT_TOKEN_TO_BE_REPLACED

So there we go, after the jump there’s a tiny entry on each band from each edition of The Synn Report, with a short genre description and a re-iteration of the “Recommended for fans of:” section. Which ones did you miss? Which ones should you give another shot to? Click each one to be linked to the appropriate article, where you’ll find the full write-ups and sample songs from each release! END_OF_DOCUMENT_TOKEN_TO_BE_REPLACED 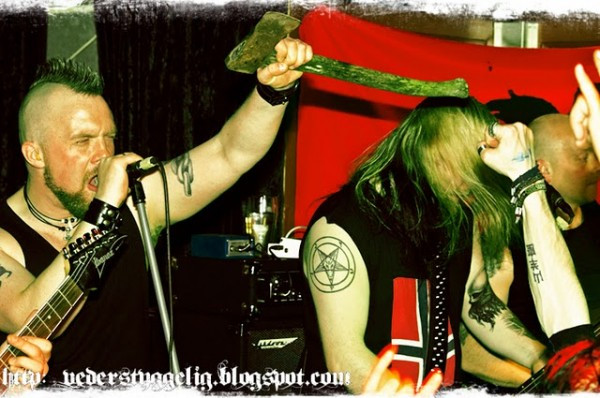 (Andy Synn is back with his lucky 13th SYNN REPORT.)

Norway’s Elite have a lot to live up to. With their chosen moniker, they have set themselves up to be seen either as foolish pretenders to black metal’s mystic might or as battle-hardened warriors whose very skill with their chosen muse makes them truly worthy of the title they have chosen.

Just as challenging, no matter their own prowess, is the fact that their sound treads ground already bloodied by the storms and sacrifices of some of their country’s greatest warriors. This battlefield was once walked by giants such as Immortal, Enslaved and Emperor, each of whom left blood and chaos in their wake, before moving on to new worlds to sow their seeds yet further.

For Elite, however, there is no thought of following Immortal into the halls of myth and legend, no desire to lose themselves in eldritch contemplation and progression like their forebears Enslaved, no sense of legacy and majesty that might make them challenge the rule of the Emperor. No, Elite are happy only on the battlefield itself, running rampant over their opponents and challenging the mightiest of warriors to single combat, for death or for glory.

Where their forebears have abandoned the battle, moving further away from the bleakness and blackness of occult warfare, Elite remain yet upon the field, collecting the weapons and the bones of the fallen, paying tribute to the lost and the damned, honing their skills over and over to perfection. Their ambition is not to carve out a kingdom for themselves as their ancestors did, but to prove themselves in combat, to face all challengers and crush them with metallic power and primal ferocity. This is not a lack of ambition, merely a different form of it, a form where bloodshed and brotherhood remain more important than majesty and acclaim. (more after the jump . . .) END_OF_DOCUMENT_TOKEN_TO_BE_REPLACED