Oh, did I spoil that Author & Punisher is making an appearance here? Whoops. Well too bad, Beastland is fucking killer but if you want to know why you’ll have to read on and see just where the San Diego noise-engineer found himself. There’s still a lot of list left to go, and knowing me, at least two-thousand more words of intro paragraph left to be written somewhere so let’s get the third chunk of this motherfucker going. END_OF_DOCUMENT_TOKEN_TO_BE_REPLACED

(This is DGR’s review of the comeback album by the Bay Area’s Light This City, which is out now via Creator-Destructor Records.)

We’ve been having a lot of fun with it lately but there seems to be a legitimate concerted effort to resurrect the mid-aughts musically, with a handful of groups that gained prominence during the early metalcore and deathcore explosions coming back after multi-year hiatuses and breakups, deciding that 2018 was going to be the time they all returned. They’re obviously not the only bands to do so this year, but it sure does seem like 2018 has been designated the year of the comeback.

We have to be on something of a ten-year cycle for groups breaking up and re-uniting, because that is one of the few ways I can explain how so many bands who were content to hang it up about seven-to-ten years ago all came back at once. If you’ll allow us to pull the curtains back a bit, it seems like my recent review work slate consists entirely of groups returning from my first few years of community college – – particularly the three-pack of Bleeding Through, The Agony Scene, and Light This City, although Into Eternity coming back and local Sacramento groups Journal and Jack Ketch both also joining the fray are part of the phenomenon, with the last two admittedly a likely the reason I’m pounding away at this theme.

As mentioned, Light This City are one of these groups, calling it quits after the release of their 2008 album Stormchaser and from then on reuniting sporadically only for a small handful of live dates (coincidentally the only times I had seen them up until July 1st of this year) — until this year, which saw the late-May release of the group’s newest album through Creator-Destructor Records, Terminal Bloom. END_OF_DOCUMENT_TOKEN_TO_BE_REPLACED

I suppose you’d have to be living under a rock not to know that At the Gates have a new album headed our way. For you under-rock dwellers, To Drink From the Night Itself will be released by Century Media on May 18th. Yesterday brought another single from the album, packaged with a wonderful video created by Costin Chioreanu of Twilight 13 Media. END_OF_DOCUMENT_TOKEN_TO_BE_REPLACED

Well, as successful as that endeavour was, now it’s my turn to talk up some of my most anticipated album scheduled for release in 2018. END_OF_DOCUMENT_TOKEN_TO_BE_REPLACED

So there we go, after the jump there’s a tiny entry on each band from each edition of The Synn Report, with a short genre description and a re-iteration of the “Recommended for fans of:” section. Which ones did you miss? Which ones should you give another shot to? Click each one to be linked to the appropriate article, where you’ll find the full write-ups and sample songs from each release! END_OF_DOCUMENT_TOKEN_TO_BE_REPLACED 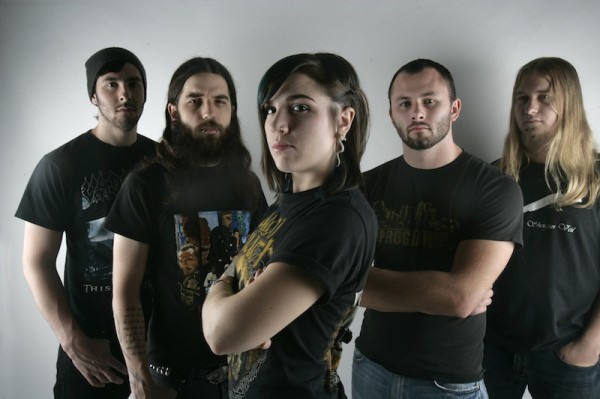 (Andy Synn returns with his 17th edition of THE SYNN REPORT and a look-back at the discography of the late, lamented Light This City. Of course, we’re streaming songs from the albums, too.)

Now sadly deceased, Light This City were shaping up to be prime movers and shakers in America’s metal scene before their unfortunate dissolution. With a back-catalogue of four albums of thrashing, raging, melodic death metal, the 5-piece, fronted by human whirlwind Laura Nichol, took the Gothenburg sound and moulded it into something distinctively American, without falling into the rut of metalcore imitation, becoming darlings of the underground scene in their short time together.

One of the strongest comparisons that can be made of the Californian quintet, in the most positive sense, is of a less dark, more thrashy variant of The Black Dahlia Murder’s specifically American brand of melodic death metal, with the latter’s scalpel-sharp Dissection influence replaced with a stronger focus on flowing At The Gates melodicism and chunky Bay Area guitar rhythms, accented by forays into explosive blast beats, soaring Maiden-esque leads and heroic displays of guitar pyrotechnics.

Frontwoman Laura Nichol possesses a powerful voice that shifts organically from a blackened, wounded screech to a rumbling, guttural growl redolent with primal ferocity and sheer, overwhelming presence. The guitars, primarily stemming from the mind and fingers of band co-founder (and drummer) Ben Murray – who switched purely to drums after the band’s second album, allowing new-found guitar wunderkind Brian Forbes to step forward – thrash out a hurricane of molten, distorted riffs and blazing guitar leads, matching their soaring melodies and shredding solos with a crushing delivery of down-tuned devastation.

Although the band are unfortunately no more, they left behind them an enviable legacy of instrumental talent and impressive compositional skill. With a laser sharp focus and a tightly co-ordinated line-up, the group were able to take their influences, many of which have since become standard fare for today’s less-inspired metal groups, and meld them into something wholly individual, using their influences to achieve something greater for themselves; re-interpretation, rather than rote imitation.  (more after the jump . . .) END_OF_DOCUMENT_TOKEN_TO_BE_REPLACED

So you all have probably read some things by the author islander, but there’s a new girl in town! I’ll be writing about the music I love and things I’m passionate about. Here is the music I love END_OF_DOCUMENT_TOKEN_TO_BE_REPLACED