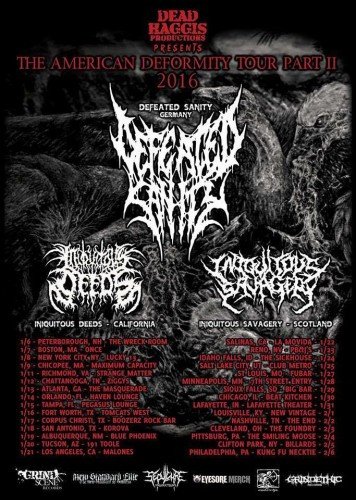 I had to pick up a friend on the way, so we ended up missing Abominant and most of Cryptic Hymn. I know NCS contributor Grant Skelton is really into Cryptic Hymn, and I thought they sounded pretty good live! But I didn’t get a picture of them either. So the review will sort of start with the third band to go on, Iniquitous Deeds. END_OF_DOCUMENT_TOKEN_TO_BE_REPLACED 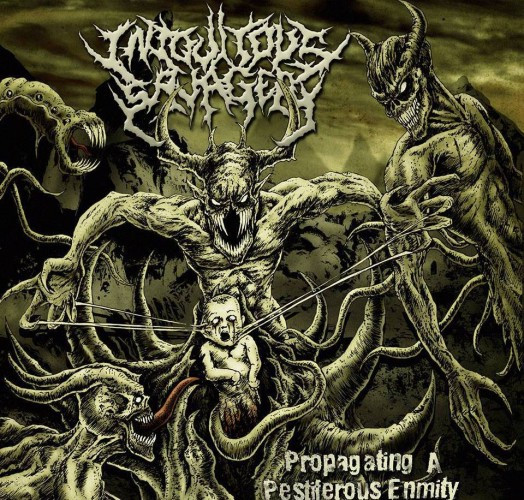 I hope everyone had a good weekend. I spent a large part of my Sunday listening to Ulver’s just-released new album more than once (featured here). I think it’s very, very good, but just as it suited a Sunday extremely well, I felt the need for something else with which to face this Monday. Something with teeth and claws, and maybe some bleeding flesh dripping from its jaws. You know, something that would help me get my game face on for the new week.

Mission accomplished. In my searches last night, I came across music from five bands and I’m dividing up what I found between two posts, in the order in which I found the music. All the bands are new to me, except the last one in the second post.

This Scottish group produced an EP in 2012 named Compelled By Perverse Immorality. I haven’t heard that one, but last night I did hear a new promo single entitled “Propagating A Pestiferous Enmity”, which comes with cover art by Mike Majewski of Devourment (“touched up” by Tom Bradfield, who also mixed and mastered the thing).

This is a mighty fine offering of brutal slamming death metal. It has all the basic ingredients down pat — the hammering riffs, the prominent snare drumming, the brutish rhythms, the grotesque guttural vocals. On top of that, it really turns on the after-burners just as often as it delivers the big, methodical, sledgehammer blows. And it’s not completely atonal either. I certainly won’t use the word “finesse” to describe the music, but I will use the word “flair”.  END_OF_DOCUMENT_TOKEN_TO_BE_REPLACED