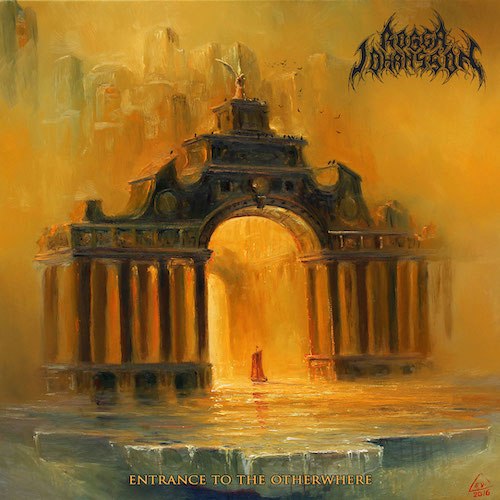 If the (often fractious) community of metal were a nation, Rogga Johansson would be rightly regarded as a national treasure. The Bard of Gamleby has left his mark through a host of bands and personal projects extending back into the golden ’90s, too numerous to count even if you used all your fingers and toes. Attempting to group all of them under the unitary banner of “Swedish death metal” is tempting (because he is Swedish and does mainly indulge in death metal), but the permutations in sound and style can evade the genre characterizations that usually spring to mind when seeing that label.

Of all the many endeavors to which his name has been attached, only one actually bears his name, and now Rogga Johansson (the band) has a new album on the horizon. Entitled Entrance to the Otherwhere, it will be released on July 19th by Transcending Obscurity Records. We had the pleasure of premiering a song from the first Rogga Johnasson album, 2017’s Garpedans (which was conceptually connected to the last Demiurg album), and now we have the opportunity to premiere a song from the new one. But before we get to it, how ’bout that fucking cover art?!? END_OF_DOCUMENT_TOKEN_TO_BE_REPLACED 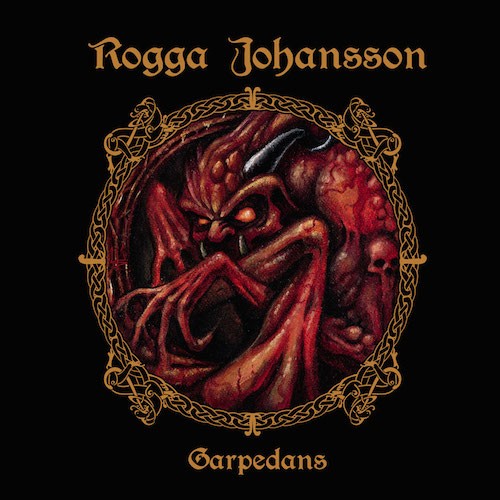 As always, no one will stop you if you decide to scroll down to the bottom of this page immediately and start playing the song by Rogga Johansson that we’re premiering, but if you do that I hope you’ll still come back up here to the top and continue reading. If you don’t, you’ll miss an interesting story, and as a further inducement, I’ll tease you with the name Demiurg.

That band was an honest-to-god death metal super-group (and by using the past tense I don’t mean to suggest they are defunct, because that would be unduly pessimistic). The line-up included Rogga Johansson as guitarist and vocalist, Dan Swanö as lead guitarist and keyboardist, Ed Warby on drums and vocals, Johan Berglund on bass, and vocalist Marjan Welman from the Dutch goth metal band Autumn.

They released three conceptually related albums beginning with 2007’s Breath of the Demiurg. The last one was 2010’s Slakthus Gamleby. As I learned when I devoted one of our Rearview Mirror posts to a stupendous song from that album earlier this year, Gamleby is the second largest locality situated in Västervik Municipality, Kalmar County, Sweden, and is Rogga Johansson’s home, and “Slakthus” is Swedish for “slaughterhouse”. END_OF_DOCUMENT_TOKEN_TO_BE_REPLACED 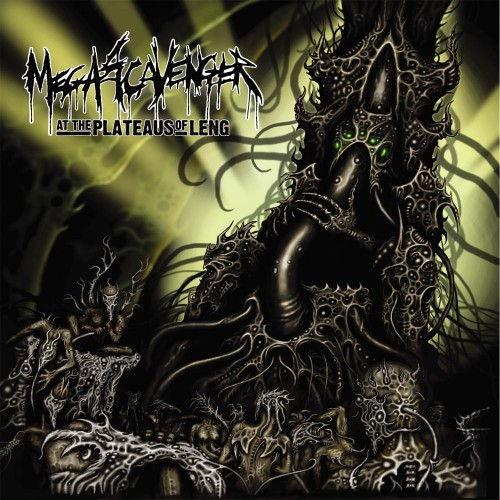 Rogga Johansson is a one man army. He has been a fixture or a session musician in so many bands that it’s easier to just send you to the list at Metal Archives rather than try to name them all here (even though that list is probably incomplete). One of his more recent projects is named Megascavenger, and today we’re high as kites over the chance to premiere the title track from the new Megascavenger album, At the Plateaus of Leng.

Rogga Johansson is also a death metal riff machine. Riffs roll out of his mind and fingers like weapons from an assembly line — black, oiled, loaded, and ready to spew destruction. At the Plateaus of Leng is packed with them. Although Johansson is also one of death metal’s most distinctive (and horrifying) vocalists, he has lined up a ridiculous collective of guests to vomit hate on this new album. This is a “who’s who” list so eye-popping that we will provide it in full:

1. “At The Plateaus Of Leng” (Vocals by DAVE INGRAM of Bolt Thrower/Benediction)

2. “The Festered Earth” (Vocals by KAM LEE of Massacre)

3. “And Then The Death Sets In” (Vocals by AAD KLOOSTERWAARD of Sinister)

4. “The Mucus Man” (Vocals by MARTIN VAN DRUNEN of Asphyx/Hail of Bullets)

5. “Like Comets Burn The Ether “(Vocals by DAVE ROTTEN of Avulsed) END_OF_DOCUMENT_TOKEN_TO_BE_REPLACED

But while researching Sr. Castellano’s artwork, I discovered — and fuck me sideways for not knowing this before — that a new Ribspreader album was released earlier this year by Vic Records. END_OF_DOCUMENT_TOKEN_TO_BE_REPLACED