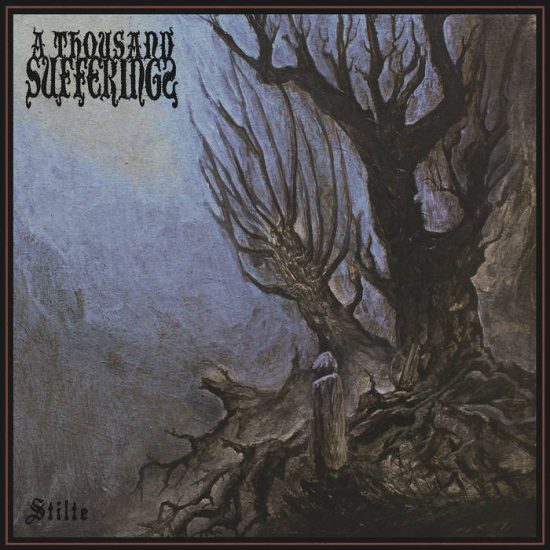 In this first song the dark, folksy, acoustic opening grabbed me, and then I felt both swept aloft and heart-stricken by the ensuing waves of bleak but grand melody and the shattering screams. The sounds are immense, stately, and emotionally crushing, even with the softer, haunting interstitials that arrive. The music boils over into sounds of torment and fury, and becomes almost hallucinatory in its agony, which makes this rendering of black/doom even more powerful. END_OF_DOCUMENT_TOKEN_TO_BE_REPLACED 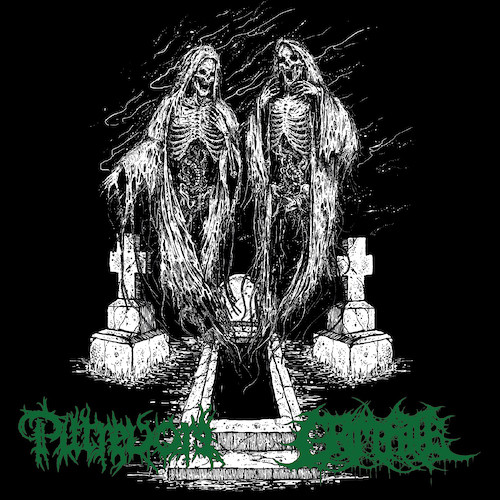 The first of those names has been reverberating in the dank caverns of the underground for more than a decade, combining the talents of people whose fame is older still, while the second name is new but destined to spread quickly by word of mouth. They have joined forces in a new 7″ split release that Dawnbreed Records and Seed of Doom Records will discharge on March 15th, and it would be hard to think of a better gift on the Ides of March for addicts of monstrous death metal. You’ll discover that for yourselves right now, because we have a stream of both tracks below. END_OF_DOCUMENT_TOKEN_TO_BE_REPLACED 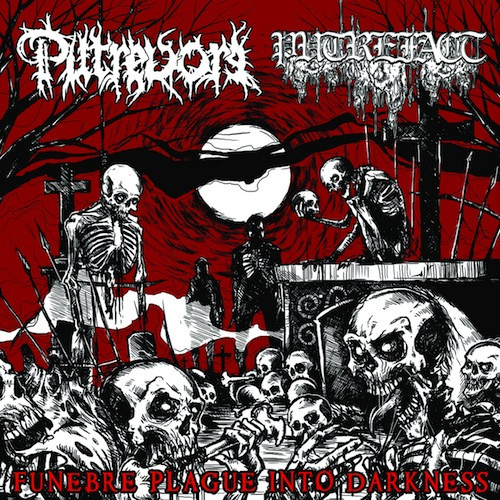 Putrevore’s track on the new split is “A Cold Grasp In the Night”, and it’s utterly obliterating. The riffs come fast and furious, like an over-heated pile-driver fueled by an accelerant that puts gasoline to shame. The drumming is superb, and superbly merciless. And Dave Rotten’s vocals sound like they’re welling up from a deep sewer that hasn’t been flushed clean in decades. And before the song ends, it dives into an off-speed crush-fest that’s just as compelling as the full-bore adrenaline surge that precedes it. A thoroughly energizing song that will zap you right in the brainstem. Check it out: END_OF_DOCUMENT_TOKEN_TO_BE_REPLACED

Welcome to the lucky 13th part of our list of the year’s most infectious extreme metal songs. Each day (almost) until the list is finished, I’m posting at least two songs that made the cut. For more details about what this list is all about and how it was compiled, read the introductory post via this link. To see the selections that preceded the two I’m announcing today, click here.

We’re getting deeper into death metal territory today. There will be plentiful bludgeoning. Internal organs may be damaged. Massive head trauma may result. But cretinous smiles will be left at the end. Or maybe I should just speak for myself.

If you were looking for pure, unadulterated, unforgiving, horrific death metal in 2012, you couldn’t go wrong with this multinational band’s album, Macabre Kingdom. This second full-length collaboration between Dave Rotten of Avulsed and Rogga Johansson of Sweden was, for me, the 2012 counterpart to the previous year’s debut by Disma, Towards the Megalith: an unstoppable battle tank of metal that  was both catastrophic in its atmospherics and also strangely addictive.

I wrote a notice about the album last April after seeing Juanjo Castellano’s stunning cover art, but I failed to review the album. I was too scared. END_OF_DOCUMENT_TOKEN_TO_BE_REPLACED

But while researching Sr. Castellano’s artwork, I discovered — and fuck me sideways for not knowing this before — that a new Ribspreader album was released earlier this year by Vic Records. END_OF_DOCUMENT_TOKEN_TO_BE_REPLACED