I’ve been making my way through the album as a whole (with thanks to Loimann for the opportunity), and I’m really enthralled by what they’ve accomplished. I’m unable to write as many album reviews as I would like, so I at least want to encourage you to listen to the two songs from the album that are now publicly available — “Haeresis” and “Tantras… Drowned”. END_OF_DOCUMENT_TOKEN_TO_BE_REPLACED

The best comment on the YouTube clip was this one: “New video from Saruman and his band directly from Isengard!” Visual resemblances aside, there’s something about the music that inspires such thoughts as well. It’s catchy-as-hell melodic death metal that bears resemblances to Amon Amarth, but with flavors of folk and power metal in the mix. Here’s the video: END_OF_DOCUMENT_TOKEN_TO_BE_REPLACED 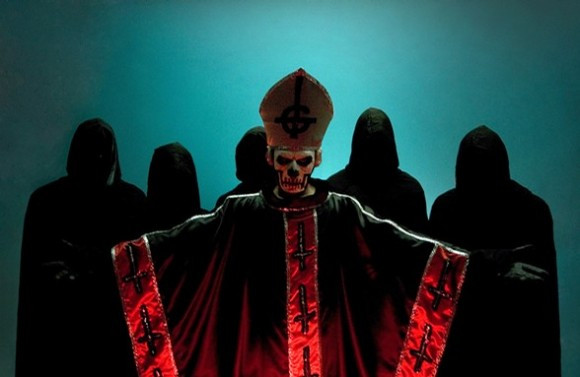 I know that I’ve already posted one round-up today, but I found more things I wanted to share. So, here goes:

I have an extremely powerful attraction to Ghost’s music, even though I listen to almost nothing else that comes within ICBM range of it. So, I was drawn like a fly to honey when I saw that a new Ghost video had premiered yesterday at Rolling Stone. It’s a professionally filmed clip of the band performing the infernal carnival of “Secular Haze” at a sold-out Webster Hall in New York. It reminds me of how damned much I’ve enjoyed the multiple live Ghost performances I’ve seen.

So, of course, I’m embedding the video here. Watch it next. END_OF_DOCUMENT_TOKEN_TO_BE_REPLACED