The band have a new Facebook page here, which will allow me and you to sniff around for more info as it emerges. At the moment, although I’m hungry for some music by this group, I have none to share, nor do I have a release date yet.

Khonsu are from Norway and they’re another recent Season of Mist signing. They’ve completed work on a debut album called Anomalia, and the cover art was unveiled yesterday, along with release dates — August 24 in Europe and August 28 in the US — and a SOM pre-order page (here).

I like that album cover. Apart from the nice cover art, the band have some other intriguing features. It was started by S. Grønbech and now includes his brother Arnt (aka Obsidian Claw, guitarist/keyboardist for Keep of Kalessin) as well as Keep of Kalessin’s vocalist, Thebon. S. Grønbech co-wrote some of the songs on KoK’s 2003 EP, Reclaim, and the KoK connection obviously persisted — though, as you’ll see, the music is quite different from KoK’s.

None of the tracks on Anomalia has yet been released for streaming, but on the strength of their demo work alone, the band was invited to perform at this year’s Inferno Festival in Oslo, and there’s a fan-filmed video of that performance on YouTube. The video jumps from song to song, and so you get to hear snippets of a lot of different Khonsu music — and it really is diverse. There’s a black metal vibe running through almost all of it, but it includes elements of industrial, ambient/shoe-gaze, avant garde, and flat-out gut-ripping explosiveness. Insane light show going on during this performance, especially when the band really cuts loose.

I’ve written about this titanic husband-and-wife duo multiple times since I saw them perform live for the first time last year and became permanently hooked. Yesterday, Jucifer finally established a Bandcamp page, making it possible to easily stream and download two of their albums — Throned In Blood (2010) and Nadir (1994). Here’s hoping that more of their discography will be added over time. If you’re unfamiliar with the band, here’s a track from Throned In Blood (and thank you Daniel for tipping me to the new Bandcamp page).

In the first part of this post I included a video recommended by fireangel at the Finland-centric Night Elves blog, and here’s a second one she recommended. This one is a recent official video from Finland’s Profane Omen, who I’ve written about in the past when they debuted their official video for “Wastehead” (here). This latest one is for a song called “Bound To Strive”, and the director is Pete Voutilainen, who also co-created the “Wastehead” video. Apparently (per fireangel), he also has another career as a tattoo-artist.

Profane Omen have been growing on me. There’s a lot of old-school, “classic” heavy metal in their music as well as clean singing (mixed in seamlessly with some aggro-harshness), neither of which is high on my list of likes, but on the other hand they create some galvanizing riffs and very catchy melodies, and vocalist Jules Näveri really does have a good set of pipes. I thoroughly enjoyed this song and the video.

This Tennessee band have been moving from the frontlines of the deathcore scene into more a more sophisticated kind of death metal. Despite the fact that I still enjoy their earlier stuff, I think their best album is their most recent — which Andy Synn reviewed for us here, concluding with these words: “This is an album that has the fingerprints of Pantera, Decapitated, Chimaira, and Vader all over it, all grinding groove and sharp, abrasive edges, topped off with a hint of Meshuggah’s brooding menace. However, it manages to weave these influences together into a sound that is recognisably Whitechapel; everything from the brutal roars and blood-stained guitar tone, to the combustive drum work, speaks of a band that has found a sound to truly call its own.”

Yesterday, The PRP premiered a David Brodsky-directed video for a song from the new album called “I, Dementia”. It’s really cool to watch, and it’s a very good song, too. 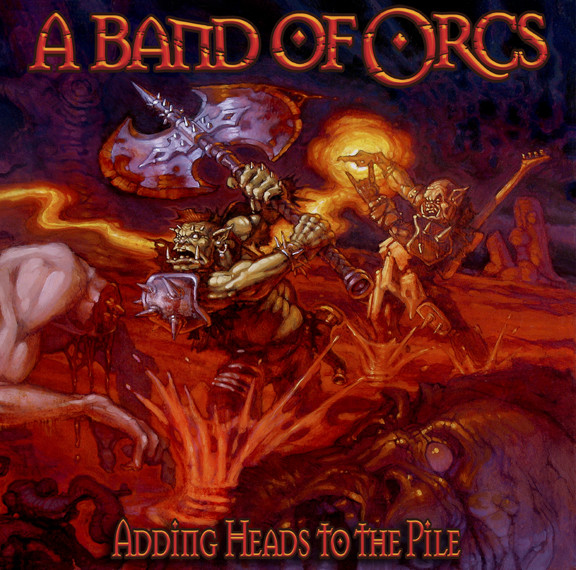 A Band of Orcs is a band of orcs we discovered in October 2010 and included in a piece on “goblin metal”. They’re from that well-known congregating place for goblins, orcs, and assorted other vicious creatures bent on the subjugation of humankind — Santa Cruz, California. Recently, I reported on the cover art for their new album, Adding Heads to the Pile, a concept album due out August 30, 2012 through Itchy Metal Entertainment.

Yesterday, Hails and Horns debuted a new single from the album called “In the Keepers Chamber”. It’s blistering and vicious and groovy and bestial. It includes a sick little melody and a flashy, skittering guitar solo. I’m diggin’ the shit out of it. Here it is:

Check out A Band of Orcs on Facebook via this link.

In May, I reported on this new cover art for the next album by Dysrhythmia, Test of Submission, which Profound Lore says they will be releasing on August 28. I didn’t think any test was necessary . . . I was and am ready to submit. But now, the band have released the first single from the album — the title track — which premiered yesterday on Metal Sucks. This is a one-of-a-kind band whose music is mind-bending. Literally, I think their new song bent my mind. I strongly recommend you GO HERE and check it out. 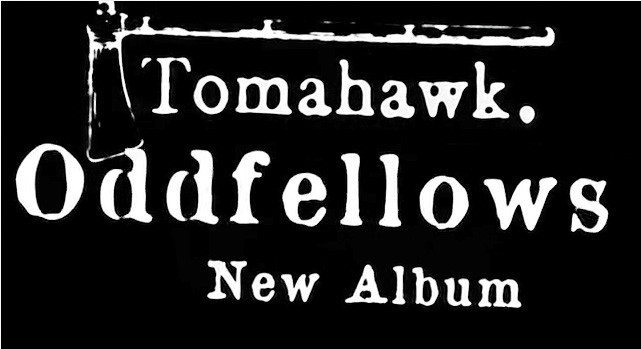 Okay, to conclude this long post, we’re going into “That’s Music, But It’s Not Metal” territory. I’m including this item mainly because I’m a fan of Mike Patton (Faith No More) and I’m pretty sure there are many others out there in our audience.

Tomahawk are a band consisting of Patton plus a bunch of other interesting musicians: Duane Denison (The Jesus Lizard, Unsemble), Trevor Dunn (Fantomas, Melvins Lite), and John Stanier (Battles, Helmet). Five years have passed since their last release, but yesterday I saw the news that they will be releasing a new album in January called Oddfellows and will be giving their first live performance in nearly a decade at the New Orlean’s Voodoo Music and Arts Experience in late October.

I also saw this teaser video for the new album, which sounds interesting, even though it has no Patton vocals in it. Tomahawk’s Facebook page is here.

2 Responses to “ROUNDING UP THE RIFF-RAFF (Part 2)”