We’ve been following Death Fetishist since we premiered the band’s first single in December of last year (which became part of their debut EP Whorifice) and continuing through the release of a single-song EP named Lucifer Descending last February and our premiere of the first advance song from the debut album Clandestine Sacrament. And now, today, Debemur Morti Productions is officially releasing Clandestine Sacrament, and we have for you the first public streaming of the album.

For those who are just discovering Death Fetishist, the principal creator behind the project is the prolific Matron Thorn, who is also the main driving force in Ævangelist as well as the protagonist in a large number of solo projects, including Benighted In Sodom. He is the vocalist in Death Fetishist and performs all the instruments other than drums and percussion, which are handled by G. Nefarious (a member of Portland’s Panzergod, whose new EP we reviewed here yesterday, as well as Daemoniis Ad Noctum). 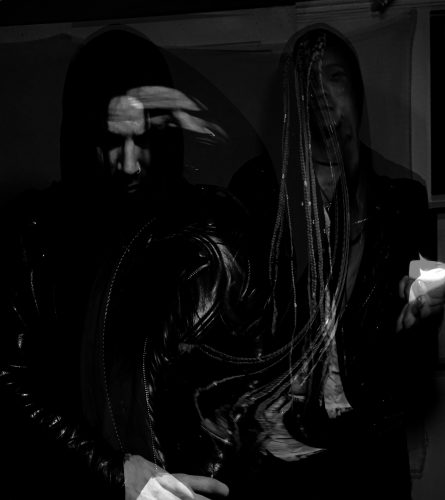 Clandestine Sacrament is a symphony of terror and derangement, a seething cauldron of black and death metal mixed with elements of dark industrial and ambient music. It’s dense and distorted, almost unrelentingly dissonant, and deeply unsettling. There is a persistently alien and hallucinatory quality to the music; the songs create ominous visions of looming horrors and set spectral bonfires of chaos ablaze.

Like a symphony, the album is best experienced as a whole, allowing it to achieve its full immersive effect. It begins and ends with Julia Black’s ghostly spoken words against a backdrop of mysterious shimmering tones and the deep rumble of a storm. The combination of ambient glimmering and thundering depth provide a reappearing bridge between the tracks, eventually bringing the listener full circle, wondering whether the netherworld you’ve just visited is part of this world or in a different dimension.

The songs generate pressure and build tension, with the dissonance of the chords and the demented frenzy of the arpeggios creating sensations of madness and despair. Rising and falling waves of spectral ambient melody are never far away, nor is the squall of guitar abrasion. And to amplify the wrenching power of the music even further, the vocals are completely off the hook.

None of the vocalists who participated in the recording held anything back, that much is obvious. The array of agonizing howls, bestial roars, and hair-raising shrieks and cries is almost overpowering in its intensity. The guest contributions of Misþyrming‘s D.G. during “Voidtripper” are absolutely explosive, so filled with raw fury and pain that you wonder how he survived the performance, and much the same can be said of Doug Moore’s bestial expulsions of unhinged sound in the two tracks where he appears. But these are matters of degree — in every song after the introduction (save one), the vocals are thoroughly terrifying.

The one exception is “Verbrannt im altem Morast”, which functions as a break of sorts in the album’s intensity. It’s an ambient music composition with a low, heaving underbelly of deep, droning sounds and pulsing electronic tones which becomes mystical and transcendent as the sound of angelic choral voices emerge along with the subtle synthesized sound of symphonic strings. It’s chillingly beautiful, but it too grows ominous and disturbing by the end. 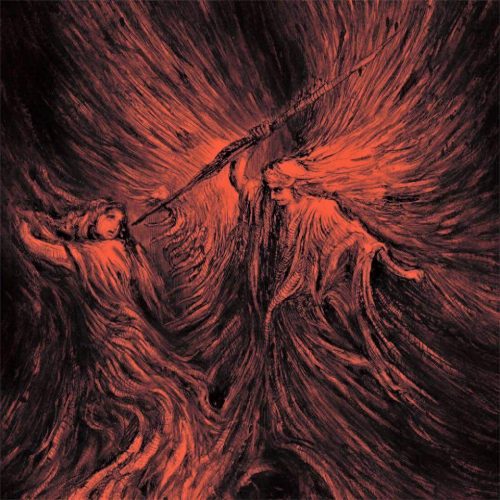 What accounts for the attraction of music that’s so often savage and poisonous, so often shrouded in a pall of ominous threat and venomous hunger? The sheer cathartic effect of such black sandstorms of sound is a pretty big attraction all by itself, but there’s more to the music than furious descents into cyclonic vortices and the unsettling drift of hallucinatory fever dreams. There’s a dynamic drum performance that moves the music, causing it to ebb and flow in ways that give you something primally attractive to hang onto.

And along with the magnetic drum performance, all of the songs are also anchored by deep, thrumming riffs that have a compelling life and rhythm of their own. They get their hooks in you. They get your head moving. They become hypnotic as they pulse through the densely layered torrents of discordance that surround them.

Needless to say, Clandestine Sacrament is not for everyone. It’s abrasive and tortured, dismal and desolate. But it also burns with eldritch fire, and its sheer vibrancy — and its effectiveness in pulling your head into an alien world — is so pronounced that for certain listeners (obviously including this one), it will be intoxicating.

The full track list of Clandestine Sacrament is as follows, annotated to show the appearance of guest performers:

The striking cover art was painted by Polish artist Andrzej Masianis and the layout was handled by French artist Dehn Sora.

Clandestine Sacrament is available today at the Debemur Morti webshop on Digipack CD and 12″LP:

The album is also available on Bandcamp:.

5 Responses to “AN NCS ALBUM PREMIERE (AND A REVIEW): DEATH FETISHIST — “CLANDESTINE SACRAMENT””