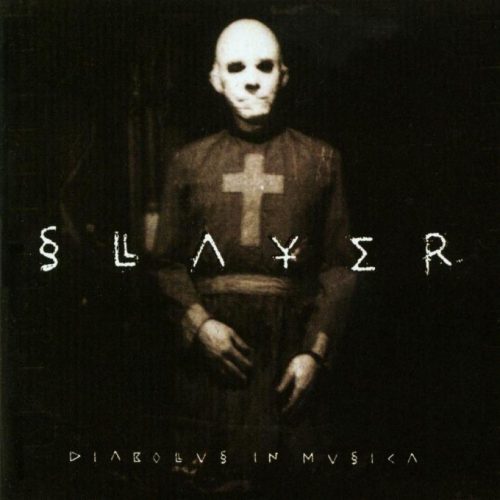 (This is the ninth installment in a series by TheMadIsraeli devoted to a retrospective chronological analysis of the discography of Slayer, and today’s subject is the band’s 1998 album Diabolus In Musica. Links to the preceding installments are at the end of this post.)

While people point to God Hates Us All quite often, I’ve always felt that the real black sheep in Slayer’s body of work (even more so than the album covered yesterday) is this album right here, new logo and all.

I actually have a soft spot for Diabolus In Musica. I like MOST of it.  It has some awful songs, but the good songs on it are VERY good.  What I respect first and foremost about this album is just Slayer’s willingness to try new things.  I will say, the fact that the album plays to the particular bents it does shouldn’t be a huge surprise, looking at the band’s preceding discography. 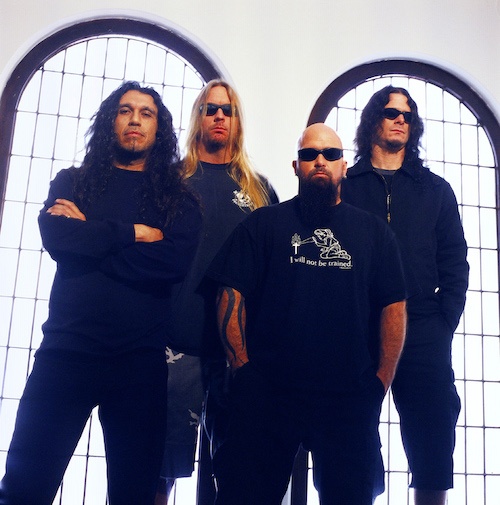 Undisputed Attitude, the band’s 1996 punk and hardcore covers album, is pretty integral to the Slayer of Diabolus… (and onward), where we see the band adopting a much less overtly sinister tone and going toward a more aggro sound.  Song-writing would be streamlined, energy levels would be higher, and Tom Araya would take a definitively more hardcore approach to his vocal style, abrasively tearing his throat apart with straight feral yelling.

As much as I’ve praised Slayer’s technicality and more involved song-writing as compared to other thrash bands, I don’t mind one bit the streamlining here because the riffs are still killer and much of the music is still as dark and oppressive as any of their best material.  What HAS changed here is a willingness and exploratory curiosity to mess around more in groove and almost doom metal territory.

A common thread among the dialogues about this album that’s always annoyed me is the constant assertion that this is a sellout album of some kind. Nothing about Diabolus… is the slightest bit commercial, or any more digestible than the rest of their material. Even more annoying is the claim that this album has gone a Pantera sort of groove route, or that the album is somehow a big foray into nü metal, when instead the groove on this record seems clearly inspired by metallic hardcore and a good dose of NYHC.

The album does include some quality classic Slayer material. “Bitter Peace”, “Perversions Of Pain”, “Scrum”, and “Point” (one of the band’s best album closers IMO) are all the Slayer you’d expect — dark, technical, riff-driven, fast as fuck thrash metal with a frantic and chaotic feel to it. But I’m also a HUGE fan of a few of the groove songs on here.

“Stain Of Mind” with it’s belligerent propulsive groove and ambient drone main riff is 100% deserving of its place as a set staple, and the slightly proggy, doomy, Sabbathian drag of “Overt Enemy” is also a real treat (I love its intro, and the main riff is hypnotizing).

There are, however, unfortunately, a good chunk of songs that either just don’t quite cut it, or are straight redundant and plain boring.  “Love To Hate” is undeniably the worst song on the album.  Pointless and laden with dumb effects apart from the raw instrumentation of the band, it’s the song that probably does draw nü metal comparisons the most, and it’s undeniably treading that line in a bad way.

“Desire” and “Screaming From The Sky” are also pretty underwhelming — plodding, mid-paced affairs that don’t really go anywhere, and the riffs are borderline background noise. “In The Name Of God” is a good song, but it doesn’t reach the propulsive heights of “Stain Of Mind” or “Overt Enemy”.  “Death’s Head” is also a borderline cool song, but it’s just not quite there either.

Overall, I still think Diabolus In Musica has a song collection where MOST of it is just as definitively Slayer and as worth hearing as the band’s better albums, but its ventures into new territory and a new sound definitely resulted in an uneven record.

I’m excited to get to the next record, though, which is probably Slayer’s most controversial, and I’m only going to stir the pot around it even more.