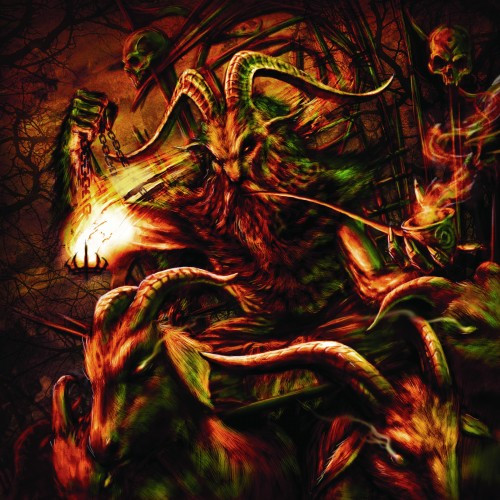 Let’s begin with the most immediately apparent accolade for the new EP by Bisonhammer (which is entitled Bisonhammer III): The cover art rules. In fact, I recommend that you click on the image above in order to see a larger version of the art, which was created by Loren Fetterman. I’ll wait.

Okay, now let’s move on to the music: It’s awfully impressive, too.

Bisonhammer are from Manchester, England, and Bisonhammer III is (duh) the third EP they’ve created so far. All three are available for streaming and download on Bandcamp (with the first two available for free or pay-what-you-want).

The new one consists of four songs, and they run roughshod through your cranium in a tidy 16 minutes total. However, they resist tidy genre classification. The music is part thrash, part raunchy death metal, part sludgy Southern rock, part groove metal, part stoner. What pulls all of these influences together is the band’s knack for writing some big-ass riffs and loading up the songs with some mighty sharp hooks. END_OF_DOCUMENT_TOKEN_TO_BE_REPLACED

(As we announced HERE, NCS is co-sponsoring a UK tour beginning on October 24, headlined by Becoming the Archetype and including UK metal band Bloodguard, which is fronted by NCS writer Andy Synn. In this post, Andy provides more info about the other bands who will be appearing on the tour and also at a post-tour show that Bloodguard is doing.)

Hello everyone. As part of promoting our little tour coming up I thought I’d do a good deed and get some press out there for each of the bands who are joining us on the dates. Sort of a mass-exposure deal where hopefully there’ll be something for (almost) everyone!

As part of our week long festivities Becoming The Archetype and Bloodguard will be hitting:

And then, moving on from the dates with Becoming The Archetype, we have a show with Abgott:

So what bands are joining us? Well here they are… END_OF_DOCUMENT_TOKEN_TO_BE_REPLACED

And by the way, you can find out more about Talanas by reading Andy’s review of their new album HERE , and you can get an introduction to Chapters via TheMadIsraeli’s write-up HERE. After the jump, check out the other UK tour posters with our humble name appearing on the top and see BTA’s entire European tour schedule, with support from Immortal Souls and Beyond the Dust after leaving the UK. END_OF_DOCUMENT_TOKEN_TO_BE_REPLACED