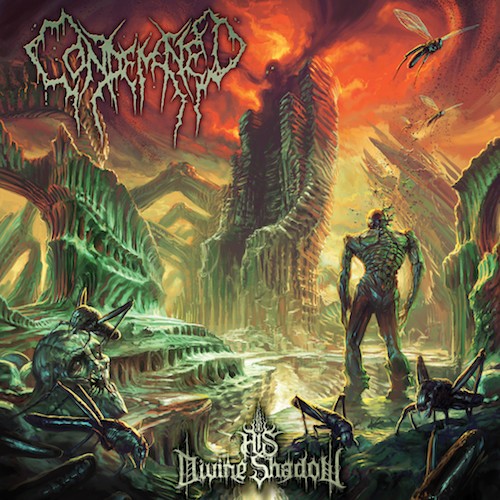 We present the full streaming premiere of His Divine Shadow, the new album by San Diego’s Condemned, just a couple of days before its March 10th release by Unique Leader Records.

One might think that Condemned need no introduction, at least to fans of more technically extravagant forms of brutal death metal. They developed a significant following on the strength of their first two albums, Desecrate the Vile (2007) and Realms of the Ungodly (2011). But in addition to the passage of six years since that last release, there are now many new faces in the band.

In fact, only guitarist Steve Crow remains from the group that released those first two records. Vocalist Angel Ochoa has been replaced by Sam Townsley, although he is not a completely new face, having appeared as a guest vocalist on Desecrate The Vile. The drum kit is now under the control of Tyson Jupin (Vile), while the bass is manned by Ryan Reidy.

What has this new collective wrought under the banner of Condemned? END_OF_DOCUMENT_TOKEN_TO_BE_REPLACED 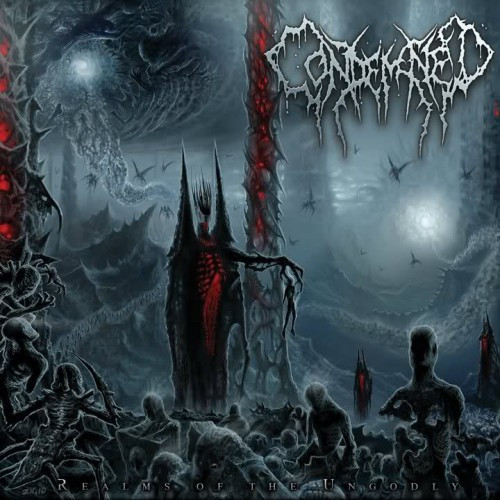 (NCS contributor The Baby Killer returns to our site with a review of the new Unique Leader release by Condemned — a band previously featured at NCS here.)

I always love watching a band’s evolution; there’s something gratifying about seeing a band that you stumbled upon one day honing their craft and growing as both musicians and songwriters. Such is the case with San Diego’s Condemned, whose newest full length Realms of the Ungodly sees them transcending their humble slam beginnings and coming into their own as a promising technical brutal death metal band.

Of course, this isn’t to say that their key elements aren’t still there. Condemned have always had a unique sound, mostly due to Angel Ochoa’s distinct gutturals and Forrest Stedt’s extremely tightly tuned snare, and all of that is still available in spades, but this time around they’ve cranked everything up to eleven. Ochoa’s voice is deeper and more natural sounding, and the snare has a sharper ring to it now that it doesn’t sound so compressed. Combine that with Steve Crow and Paul Avila’s skillful blending of slams and tremolo riffs and you have the pandemonium that is Condemned.

The band’s previous album, Desecrate the Vile, was no lightweight to begin with, but it was still a fairly straightforward slam album, whereas Realms of the Ungodly could easily be mistaken for Defeated Sanity. Pretty impressive change in the space of just one album, even if they were a few years apart.

The songs tend to blend into each other after a while, but don’t let that deter you.  Usually when people say that about an album they mean it gets monotonous, but in this particular case it actually speaks to the band’s consistency. Some songs are better than others, sure, but even the songs that sound the same are all really good, and I don’t know about you but I certainly can’t complain about that. The solo in the title track helps break up the “monotony” for a bit, but it’s pretty brief and it’s the only one on the album. Who knows, maybe Condemned will continue to expand their sound and have more solos in the next one. END_OF_DOCUMENT_TOKEN_TO_BE_REPLACED

Remember — this isn’t a cumulative list. If we found out about a new album before August, we wrote about it in previous installments of this series. So, be sure to check the Category link called “Forthcoming Albums” on the right side of this page to see forecasted releases we reported earlier. This month’s list begins right after the jump. Look for your favorite bands, or get intrigued about some new ones. And feel free to tell us about how we fucked up by omitting releases that you’re stoked about. END_OF_DOCUMENT_TOKEN_TO_BE_REPLACED 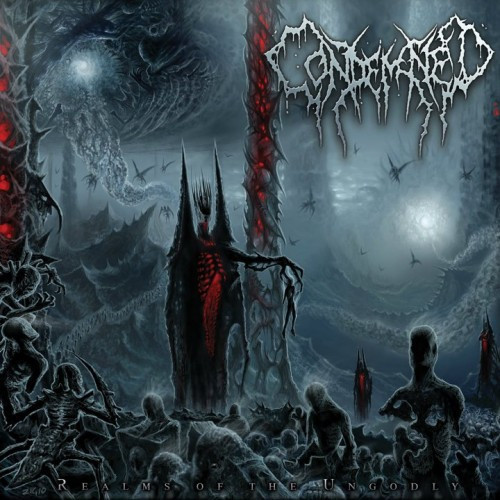 I’ve visited San Diego a couple of times. It seems like a nice town. You visit Balboa Park, and you see carefree people enjoying the beautiful surroundings and (when the fog isn’t insinuating itself) the sunshine. Fun-loving folks are out having fun at eateries and watering holes in the Gaslamp Quarter. There are beautiful beaches and ocean vistas, and you can catch a ballgame at Petco Park (as long as you don’t mind watching the Padres lose). But . . . there’s also a vile, dark, underside to this superficially pleasant city, and its name is Condemned.

Condemned is a brutal death metal band with a penchant for creating songs that slam. I don’t claim to be an expert in the subgenre of death metal called slam, but I can claim to have suffered brain damage listening to Condemned’s 2007 debut album, Desecrate the Vile. This was a tragic occurrence, because I have so little brain to damage that damaging any of it is a serious loss. However, I have managed to soldier on.

Unfortunately, I suffered further brain damage this afternoon listening to the first song to debut from the new album by Condemned, Realms of the Ungodly, which will be released by Unique Leader on November 9. Fortunately, November 9 is a long way off. I’m on a waiting list at a Seattle hospital for a brain donor, and I’m hoping I’ll be a lucky recipient before November 9. It would be nice to have a whole new brain before I listen to a whole album’s worth of songs like this one. Otherwise, I could be in some real trouble.

The new song is called “The Divine Order of Babylon”, and it’s decimating. The music is ugly, scary, and horrific — but it’s got groove, too. What’s left of my brain, while mourning the part that was killed off, remembers enjoying the song while it lasted. It’s enjoying the awesome album cover by Jon Zig, too. You can listen to the new song after the jump. Maybe your brain is too large and you’d like to reduce it to normal size. END_OF_DOCUMENT_TOKEN_TO_BE_REPLACED