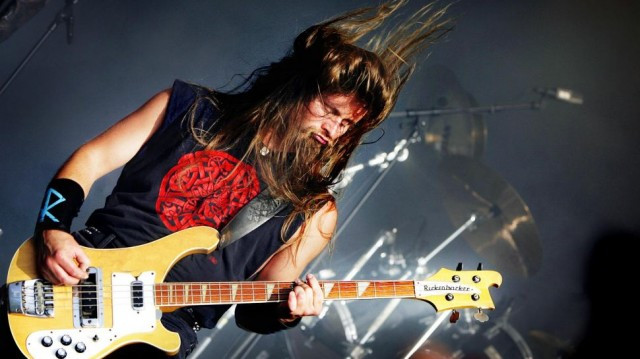 “Emperor and Enslaved are two of the most well-known bands in the history of Norwegian extreme metal, and June strangely enough brings tributes to both bands. On June 25th the album A Tribute To Emperor-In Honour Of Icon E will be released, and a week before Önd-A Tribute To Enslaved will see the light of day.”

And so begins an article by Totto Mjelde that appears today on Lydverket, a Norway-based web site affiliated with the Norwegian Broadcasting Corporation, NRK. We’ve written about Totto’s coverage of Norwegian metal in the past, and this most recent piece by him is definitely worth reading. It includes interviews of Raphael Henry (Pictonian Records), the curator of the Enslaved tribute; Ivar Peersen of Enslaved (who, interestingly, plays guitar on Taake’s contribution to the Emperor tribute);  Nocturnal, from Tryzna Productions, which is releasing the Emperor tribute along with Candlelight Records; and Ørjan Nordvik of Helheim., who perform on that tribute.

But that’s not all. Totto’s article also includes exclusive streams of two songs from the Enslaved tribute compilation: Ribozyme’s performance of “To The Coast”, and Vreid’s cover of “Lunar Force”.

GO HERE to read and listen to Totto’s feature. After the jump I’ve included the cover art and track lists for both albums. END_OF_DOCUMENT_TOKEN_TO_BE_REPLACED

It also looks like it will be a very nice album, with Emperor covers by the likes of Demonical, Helheim, Horna, Taake, and Setherial. I’ll give you the full tracklist rundown after the jump, but the news for today is that the album has gone up on Amqzon for pre-order, which means you can hear snippets of each song here. END_OF_DOCUMENT_TOKEN_TO_BE_REPLACED

This isn’t a cumulative list, so be sure to check the Category link called “Forthcoming New Albums” on the right side of this page to see forecasted releases we reported in previous installments. This month’s list begins right after the jump. Look for your favorite bands, or get intrigued about some new ones. There’s some awesome shit on the way. END_OF_DOCUMENT_TOKEN_TO_BE_REPLACED

The video is for a song called “Trapped In An Hourglass”. Very cool music — fast-paced, Finnish-style melodic death that’s both catchy and cathartic, with two admirable guitar solo’s (one of which is a jazzy bit of picking at about the 3:00 mark), some clean vocals that even I like, and evidence that Finnish howlers can even shriek underwater.  (more after the jump . . .) END_OF_DOCUMENT_TOKEN_TO_BE_REPLACED

So you all have probably read some things by the author islander, but there’s a new girl in town! I’ll be writing about the music I love and things I’m passionate about. Here is the music I love END_OF_DOCUMENT_TOKEN_TO_BE_REPLACED